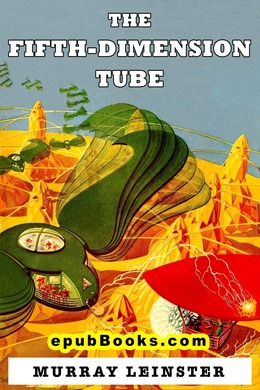 Settle in for a rollicking science-fiction adventure from golden-era star Murray Leinster. In The Fifth-Dimension Tube, a prominent scientist and his beloved daughter have become stranded in another dimension. In order to survive, they must cast their lot with rogue mathematician Tommy Reeves. To succeed in this life-or-death endeavor, Reeves has to overcome not only his own gadabout ways, but also the thugs who are pursuing him.

The generator rumbled and roared, building up to its maximum speed. The whole laboratory quivered from its vibration. The dynamo hummed and whined and the night silence outside seemed to make the noises within more deafening. Tommy Reames ran his eyes again over the power-leads to the monstrous, misshapen coils. Professor Denham bent over one of them, straightened, and nodded. Tommy Reames nodded to Evelyn, and she threw the heavy multiple-pole switch.

There was a flash of jumping current. The masses of metal on the floor seemed to leap into ungainly life. The whine of the dynamo rose to a scream and its brushes streaked blue flame. The metal things on the floor flicked together and were a tube, three feet and more in diameter. That tube writhed and twisted. It began to form itself into an awkward and seemingly impossible shape, while metal surfaces sliding on each other produced screams that cut through the din of the motor and dynamo. The writhing tube strained and wriggled. Then there was a queer, inaudible snap and something gave. A part of the tube quivered into nothingness. Another part hurt the eyes that looked upon it.

And then there was the smell of burned insulation and a wire was arcing somewhere, while thick rubbery smoke arose. A fuse blew out with a thunderous report, and Tommy Reames leaped to the suddenly racing motor-generator. The motor died amid gasps and rumblings. And Tommy Reames looked anxiously at the Fifth-Dimension Tube.

It was important, that Tube. Through it, Tommy Reames and Professor Denham had reason to believe they could travel to another universe, of which other men had only dreamed. And it was important in other ways, too. At the moment Evelyn Denham threw the switch, last-edition newspapers in Chicago were showing headlines about “King” Jacaro’s forfeiture of two hundred thousand dollars’ bail by failing to appear in court. King Jacaro was a lord of racketeerdom.

While Tommy inspected the Tube anxiously, a certain chief of police in a small town upstate was telling feverishly over the telephone of a posse having killed a monster lizard by torchlight, having discovered it in the act of devouring a cow. The lizard was eight feet high, walked on its hind legs, and had a collar of solid gold about its neck. And jewel importers, in New York, were in anxious conference about a flood of untraced jewels upon the market. Their origin was unknown. The Fifth-Dimension Tube ultimately affected all of those affairs, and the Death Mist as well. And–though it was not considered dangerous then–everybody remembers the Death Mist now.

But at the moment Professor Denham stared at the Tube concernedly, his daughter Evelyn shivered from pure excitement as she looked at it, and a red-headed man named Smithers looked impassively from the Tube to Tommy Reames and back again. He’d done most of the mechanical work on the Tube’s parts, and he was as anxious as the rest. But nobody thought of the world outside the laboratory.

Professor Denham moved suddenly. He was nearest to the open end of the Tube. He sniffed curiously and seemed to listen. Within seconds the others became aware of a new smell in the laboratory. It seemed to come from the Tube itself, and it was a warm, damp smell that could only be imagined as coming from a jungle in the tropics. There were the rich odors of feverishly growing things; the heavy fragrance of unknown tropic blossoms, and a background of some curious blend of scents and smells which was alien and luring, and exotic. The whole was like the smell of another planet of the jungles of a strange world which men had never trod. And then, definitely coming out of the Tube, there was a hollow, booming noise.

It had been echoed and re-echoed amid the twistings of the Tube, but only an animal could have made it. It grew louder, a monstrous roar. Then yells sounded suddenly above it–human yells, wild yells, insane, half-gibbering yells of hysterical excitement and blood lust. The beast-thing bellowed and an ululating chorus of joyous screams arose. The laboratory reverberated with the thunderous noise. Then there was the sound of crashing and of paddings, and abruptly the noise was diminishing as if its source were moving farther away. The beast-thing roared and bellowed as if in agony, and the yelling noise seemed to show that men were following close upon its flanks.

Those in the laboratory seemed to awaken as if from a bad dream. Denham was kneeling before the mouth of the Tube, an automatic rifle in his hands. Tommy Reames stood grimly before Evelyn. He’d snatched up a pair of automatic pistols. Smithers clutched a spanner and watched the mouth of the Tube with a strained attention. Evelyn stood shivering behind Tommy.

Tommy said with a hint of grim humor:

“I don’t think there’s any doubt about the Tube having gotten through. That’s the Fifth Dimension planet, all right.”