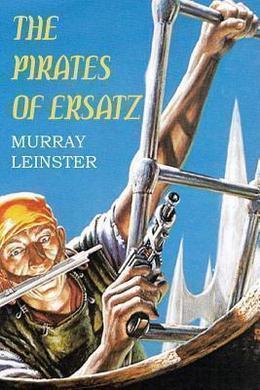 The Pirates of Ersatz

Protagonist Bran Hoddan wants nothing more for himself than to be free of the taint of criminal activity that has long besmirched his clan. His plans for his future include a steady job and a fulfilling marriage. However, unforeseen circumstances have intervened, and suddenly Hoddan finds himself being pursued by a brutal group of primitive people. In desperation, he turns to his native trade – piracy – to free himself.

It was not mere impulsive action when Bron Hoddan started for the planet Walden by stowing away on a ship that had come to his native planet to hang all his relatives. He’d planned it long before. It was a long-cherished and carefully worked out scheme. He didn’t expect the hanging of his relatives, of course. He knew that they’d act grieved and innocent, and give proof that they were simple people leading blameless lives. They’d make their would-be executioners feel ashamed and apologetic for having thought evil of them, and as soon as the strangers left they’d return to their normal way of life, which was piracy. But while this was going on, Bron Hoddan stowed away on the menacing vessel. Presently he arrived at its home world. But his ambition was to reach Walden, so he set about getting there. It took a long time because he had to earn ship-passage from one solar system to another, but he held to his idea. Walden was the most civilized planet in that part of the galaxy. On Walden, Hoddan intended, in order (a) to achieve splendid things as an electronic engineer, (b) to grow satisfactorily rich, (c) to marry a delightful girl, and (d) end his life a great man. But he had to spend two years trying to arrange even the first.

On the night before the police broke in the door of his room, though, accomplishment seemed imminent. He went to bed and slept soundly. He was calmly sure that his ambitions were about to be realized. At practically any instant his brilliance would be discovered and he’d be well-to-do, his friend Derec would admire him, and even Nedda would probably decide to marry him right away. She was the delightful girl. Such prospects made for good sleeping.

And Walden was a fine world to be sleeping on. Outside the capital city its spaceport received shipments of luxuries and raw materials from halfway across the galaxy. Its landing grid reared skyward and tapped the planet’s ionosphere for power with which to hoist ships to clear space and pluck down others from emptiness. There was commerce and manufacture and wealth and culture, and Walden modestly admitted that its standard of living was the highest in the Nurmi Cluster. Its citizens had no reason to worry about anything but a supply of tranquilizers to enable them to stand the boredom of their lives.

Even Hoddan was satisfied, as of the moment. On his native planet there wasn’t even a landing grid. The few, battered, cobbled ships the inhabitants owned had to take off precariously on rockets. They came back blackened and sometimes more battered still, and sometimes they were accompanied by great hulls whose crews and passengers were mysteriously missing. These extra ships had to be landed on their emergency rockets, and, of course, couldn’t take off again, but they always vanished quickly just the same. And the people of Zan, on which Hoddan had been born, always affected innocent indignation when embattled other spacecraft came and furiously demanded that they be produced.

There were some people who said that all the inhabitants of Zan were space pirates and ought to be hung and compared with such a planet, Walden seemed a very fine place indeed. So on a certain night Bron Hoddan went confidently to bed and slept soundly until three hours after sunrise. Then the police broke in his door.

They made a tremendous crash in doing it, but they were in great haste. The noise waked Hoddan, and he blinked his eyes open. Before he could stir, four uniformed men grabbed him and dragged him out of bed. They searched him frantically for anything like a weapon. Then they stood him against a wall with two stun-pistols on him, and the main body of cops began to tear his room apart, looking for something he could not guess. Then his friend Derec came hesitantly in the door and looked at him remorsefully. He wrung his hands.

Hoddan blinked at him. He was dazed. Things didn’t become clearer when he saw that a cop had slit open his pillow and was sifting its contents through his fingers. Another cop was ripping the seams of his mattress to look inside. Somebody else was going carefully through a little pile of notes that Nedda had written, squinting at them as if he were afraid of seeing something he’d wish he hadn’t.

“You killed someone, Bron. An innocent man! You didn’t mean to, but you did, and … it’s terrible!”

“They found him outside the powerhouse,” said Derec bitterly. “Outside the Mid-Continent station that you–”