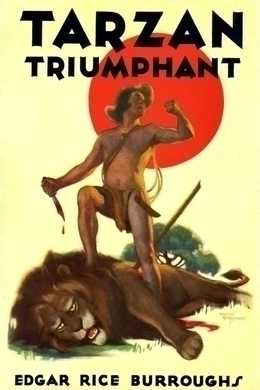 An evil stalks the land of Tarzan of the Apes. Tarzan follows them patiently waiting for the time to strike these intruders. But they were not the only evil that stalked the lands, in the small valley of the Ghenzi Mountains, the last remnants of an ugly, perverted people dwelled in what they called their faith. It was an ancient belief, now they were wicked and many of them were insane. They have captured Lady Barbara Collis and meant to use her as a human sacrifice!

As far as I know the first Earl of Whimsey has nothing to do with this story, and so we are not particularly interested in the fact that it was not so much the fine grade of whiskey that he manufactured that won him his earidom as the generous contribution he made to the Liberal party at the time that it was in power a number of years ago.

Being merely a simple historian and no prophet, I cannot say whether we shall see the Earl of Whimsey again or not. But if we do not find the Earl particularly interesting, I can assure you that the same may not be said of his fair daughter, Lady Barbara Collis.

The African sun, still an hour high, was hidden from the face of the earth by solid cloud banks that enveloped the loftier peaks of the mysterious, impenetrable fastnesses of the forbidding Ghenzi Mountain range that frowned perpetually upon a thousand valleys little known to man.

From far above this seeming solitude, out of the heart of the densely banked clouds, there came to whatever ears there might be to hear a strange and terrifying droning, suggesting the presence of a preposterous Gargantuan bumblebee circling far above the jagged peaks of Ghenzi. At times it grew in volume until it attained terrifying proportions; and then gradually it diminished until it was only a suggeslion of a sound, only to grow once again in volume and to again retreat.

For a long time, invisible and mysterious, it had been describing its great circles deep in the concealing vapors that hid it from the earth and hid the earth from it.

Lady Barbara Collis was worried. Her petrol was running low. At the crucial moment her compass had failed her, and she had been flying blind through the clouds looking for an opening for what now seemed an eternity of hours to her.

She had known that she must cross a lofty range of mountains, and she had kept at a considerable altitude above the clouds for this purpose; but presently they had risen to such heights that she could not surmount them; and, foolishly, rather than turn back and give up her projected non-stop flight from Cairo to the Cape, she had risked all in one effort to penetrate them.

For an hour Lady Barbara had been indulging in considerable high powered thinking, intermingled with the regret that she had not started thinking a little more heavily before she had taken off, as she had, against the explicit command of her sire. To say that she was terrified in the sense that fear bad impaired any of her faculties would not be true. However, she was a girl of keen intelligence, fully competent to understand the grave danger of her situation; and when there loomed suddenly close to the tip of her left wing a granite escarpment that was lost immediately above and below her in the all enveloping vapor, it is no reflection upon her courage that she involuntarily caught her breath in a quick gasp and simultaneously turned the nose of her ship upwards until her altimeter registered an altitude that she knew must be far higher than the loftiest peak that reared its head above any part of Africa.

Rising in a wide spiral, she was soon miles away from that terrifying menace that had seemingly leaped out of the clouds to seize her. Yet even so, her plight was still as utterly hopeless as it well could be. Her fuel was practically exhausted. To attempt to drop below the cloud banks, now that she knew positively that she was among lofty mountains, would be utter madness; and so she did the only thing that remained to her.

Alone in the cold wet clouds, far above an unknown country, Lady Barbara Collis breathed a little prayer as she balled out. With the utmost meticulosity she counted ten before she jerked the rip cord of her chute.

At that same instant Fate was reaching out to gather other threads–far flung threads–for this tiny fragment of her tapestry.

Kabariga, chief of the Bangalo people of Bungalo, knelt before Tarzan of the Apes many weary marches to the south of the Ghenzi Mountain.

In Moscow, Leon Stabutch entered the office of Stalin, the dictator of Red Russia.

Ignorant of the very existence of Kabariga, the black chief, or of Leon Stabutch or Lady Barbara Collis, Lafayette Smith, A.M., Ph.D., Sc.D., professor of geology at the Phil Sheridan Military Academy, boarded a steamship in the harbor of New York.

Mr. Smith was a quiet, modest, scholarly looking young man with horn rimmed spectacles, which he wore not because of any defect of eyesight but in the belief that they added a certain dignity and semblance of age to his appearance. That his spectacles were fitted with plain glass was known only to himself and his optician.