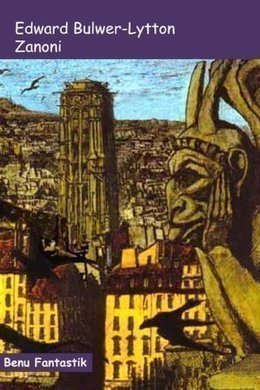 Before Orlando, before The Highlander, before the Elves in Lord of the Rings, before any and all fictional immortals, there was Zanoni. Through magical alchemical elixirs and the mysterious rites of the Rosicrucian Brotherhood, Zanoni has been gifted with immortal life; he chooses to sacrifice this gift for the love of a beautiful and gifted young woman, and the family he wishes to have. Along with other works of Edward Bulwer Lytton, such as Vril:The Power of the Coming Race, Zanoni’s deep archetypal and symbolic story has such a ring of Truth, that it influenced the New Thought and Theosophy movements of it’s time, and in turn, has set the stage for the modern New Age movement, and resurgance of interest in the subjects of alchemy and physical immortality.

At Naples, in the latter half of the last century, a worthy artist named Gaetano Pisani lived and flourished. He was a musician of great genius, but not of popular reputation; there was in all his compositions something capricious and fantastic which did not please the taste of the Dilettanti of Naples. He was fond of unfamiliar subjects into which he introduced airs and symphonies that excited a kind of terror in those who listened. The names of his pieces will probably suggest their nature. I find, for instance, among his MSS., these titles: “The Feast of the Harpies,” “The Witches at Benevento,” “The Descent of Orpheus into Hades,” “The Evil Eye,” “The Eumenides,” and many others that evince a powerful imagination delighting in the fearful and supernatural, but often relieved by an airy and delicate fancy with passages of exquisite grace and beauty. It is true that in the selection of his subjects from ancient fable, Gaetano Pisani was much more faithful than his contemporaries to the remote origin and the early genius of Italian Opera.

That descendant, however effeminate, of the ancient union between Song and Drama, when, after long obscurity and dethronement, it regained a punier sceptre, though a gaudier purple, by the banks of the Etrurian Arno, or amidst the lagunes of Venice, had chosen all its primary inspirations from the unfamiliar and classic sources of heathen legend; and Pisani’s “Descent of Orpheus” was but a bolder, darker, and more scientific repetition of the “Euridice” which Jacopi Peri set to music at the august nuptials of Henry of Navarre and Mary of Medicis.* Still, as I have said, the style of the Neapolitan musician was not on the whole pleasing to ears grown nice and euphuistic in the more dulcet melodies of the day; and faults and extravagances easily discernible, and often to appearance wilful, served the critics for an excuse for their distaste. Fortunately, or the poor musician might have starved, he was not only a composer, but also an excellent practical performer, especially on the violin, and by that instrument he earned a decent subsistence as one of the orchestra at the Great Theatre of San Carlo. Here formal and appointed tasks necessarily kept his eccentric fancies in tolerable check, though it is recorded that no less than five times he had been deposed from his desk for having shocked the conoscenti, and thrown the whole band into confusion, by impromptu variations of so frantic and startling a nature that one might well have imagined that the harpies or witches who inspired his compositions had clawed hold of his instrument.

The impossibility, however, to find any one of equal excellence as a performer (that is to say, in his more lucid and orderly moments) had forced his reinstalment, and he had now, for the most part, reconciled himself to the narrow sphere of his appointed adagios or allegros. The audience, too, aware of his propensity, were quick to perceive the least deviation from the text; and if he wandered for a moment, which might also be detected by the eye as well as the ear, in some strange contortion of visage, and some ominous flourish of his bow, a gentle and admonitory murmur recalled the musician from his Elysium or his Tartarus to the sober regions of his desk. Then he would start as if from a dream, cast a hurried, frightened, apologetic glance around, and, with a crestfallen, humbled air, draw his rebellious instrument back to the beaten track of the glib monotony. But at home he would make himself amends for this reluctant drudgery. And there, grasping the unhappy violin with ferocious fingers, he would pour forth, often till the morning rose, strange, wild measures that would startle the early fisherman on the shore below with a superstitious awe, and make him cross himself as if mermaid or sprite had wailed no earthly music in his ear.