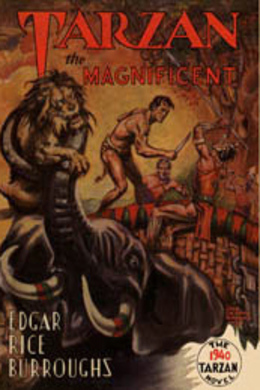 The bones of a dead man, a black runner still clutching a cleft stick containing a message…Tarzan, mighty man of the forest, finds it and learns of the captivity of a white man and his beautiful daughter. Courageously going to their rescue, Tarzan finds they are in the hands of the Kaji, a mysterious tribe of warrior women who will mate only with white men. Thus begins Tarzan’s most fantastic adventure, one that will keep you on the edge of your seat in excitement.

Truth is stranger than fiction.

If this tale should seem in part incredible, please bear this axiom in mind. It had its beginning more than twenty years ago, unless one wishes to go further back to the first amoeba or even beyond that to the cosmos shattering clash of two forgotten suns; but we shall confine our story, other than by occasional reference, to the stage, the actors, and the business of the present time.

The searing sun rays scorch down upon a shriveled plain a scant five degrees north of the equator. A man, clothed in torn shirt and trousers upon which dried blood has caked and turned a rusty brown, staggers and falls to lie inert.

A great lion looks down upon the scene from the summit of a distant rocky ledge where a few tenacious bushes cling to give shade to the lair of the king; for this is Africa.

Ska, the vulture, wheels and circles in the blue, sky-writing anticipation far above the body of the fallen man.

Not far to the south, at the edge of the dry plain, another man swings easily toward the north. No sign of fatigue or exhaustion here. The bronze skin glows with health, full muscles glide beneath it. The free gait, the noiseless tread might be those of Sheeta, the panther; but there is no slinking here. It is the carriage of one who knows neither doubt nor fear, of a lord in his own domain.

He is encumbered by but a single garment, a loincloth of doe- skin. A coil of grass rope is looped over one shoulder, behind the other hangs a quiver of arrows; a scabbarded knife swings at his hip; a bow and a short spear complete his equipment. A shock of black hair falls in disorder above serene, grey eyes, eyes that can reflect the light of a summer sea or the flashing steel of a rapier.

The Lord of the Jungle is abroad.

He is far to the north of his ancient haunts, yet this is no unfamiliar terrain. He has been here many times before. He knows where water may be had for the digging. He knows where the nearest water hole lies where he can make a kill and fill his belly.

He has come north at the behest of an emperor to investigate a rumor that a European power is attempting to cause the defection of a native chief by means of bribery. War and rumors of war are in the air, but of this tale such things are not a part–we hope. However, we are no prophet. We are merely a chronicler of events as they transpire. We follow the activities of our characters to the bitter end, even to war; but we hope for the best. However, only time can tell.

As Tarzan swung with easy strides out across the plain, no sound escaped his keen ears; no moving thing, his eyes; no scent, borne upon the soft bosom of Usha the wind, went unidentified. Far in the distance he saw Numa the lion standing upon his rocky ledge; he saw Ska the vulture circling above something that Tarzan could not see. In all that he saw or heard or smelled he read a story; for to him this savage world was an open book, sometimes a thrilling, always an interesting narrative of love, of hate, of life, of death.

Where you or I might occasionally pick out a letter or a word, Tarzan of the Apes grasped the entire text and countless implications that we might never guess.

Presently, ahead of him, he saw something white shining in the sunlight - a human skull; and as he came closer his eyes picked out the skeleton of a man, the bones only slightly disarranged. From among them grew a low desert shrub proclaiming that the skeleton had lain there for a long time.

Tarzan paused to investigate, for to him in his world nothing is too trivial to pass by without question. He saw that the skeleton was that of a Negro and that it had lain, there for a long time, years probably; which was entirely possible in this hot, dry plain. He could not tell how the man had come to his death, but he guessed that it might have been from thirst.

Then he saw something lying by the bones of a hand, something half buried by shifting soil; and he stopped and picked it up, drawing it carefully out of the earth. It was a split stick of hardwood in the split end of which was wedged a thin parcel of oiled silk.

The silk was stained and brittle and dry. It seemed that it might crumble to his touch, but that was only the outer layer. As he carefully unwrapped it, he found the inner layers better preserved. Inside the silk wrapper he found what he had expected–a letter.

It was written in English in a small, extremely legible hand. Tarzan read it with interest, interest that was perhaps stimulated by the date at the top of the sheet. Twenty years had elapsed since that letter had been written. For twenty years it had lain here beside the skeleton of its bearer in mute testimony to the loneliness of this barren plain.