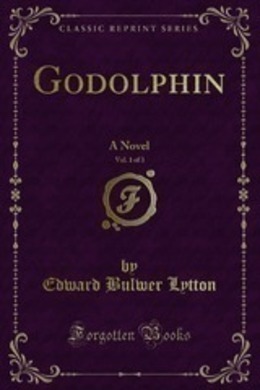 Godolphin is a satirical 19th century British romance novel about the life of an idealistic man, Percy Godolphin, and his eventual lover, Constance Vernon. Written as a frame narrative, Godolphin provides a satirical insight into the day-to-day lives of the early 19th century British elite. The story is told through the narration of two protagonists, Percy Godolphin and Constance Vernon, as they rise to prominence among the London elite.

“Is the night calm, Constance?”

“Beautiful! the moon is up.”

“Open the shutters wider, there. It is a beautiful night. How beautiful! Come hither, my child.”

The rich moonlight that now shone through the windows streamed on little that it could invest with poetical attraction. The room was small, though not squalid in its character and appliances. The bed-curtains, of a dull chintz, were drawn back, and showed the form of a man, past middle age, propped by pillows, and bearing on his countenance the marks of approaching death. But what a countenance it still was! The broad, pale, lofty brow; the fine, straight, Grecian nose; the short, curved lip; the full, dimpled chin; the stamp of genius in every line and lineament;–these still defied disease, or rather borrowed from its very ghastliness a more impressive majesty. Beside the bed was a table spread with books of a motley character. Here an abstruse system of Calculations on Finance; there a volume of wild Bacchanalian Songs; here the lofty aspirations of Plato’s Phoedon; and there the last speech of some County Paris on a Malt Tax: old newspapers and dusty pamphlets completed the intellectual litter; and above them rose, mournfully enough, the tall, spectral form of a half-emptied phial, and a chamber-candlestick, crested by its extinguisher.

A light step approached the bedside, and opposite the dying man now stood a girl, who might have seen her thirteenth year. But her features–of an exceeding, and what may be termed a regal beauty–were as fully developed as those of one who had told twice her years; and not a trace of the bloom or the softness of girlhood could be marked on her countenance. Her complexion was pale as the whitest marble, but clear, and lustrous; and her raven hair, parted over her brow in a fashion then uncommon, increased the statue-like and classic effect of her noble features. The expression of her countenance seemed cold, sedate, and somewhat stern; but it might, in some measure, have belied her heart; for, when turned to the moonlight, you might see that her eyes were filled with tears, though she did not weep; and you might tell by the quivering of her lip, that a little hesitation in replying to any remark from the sufferer arose from her difficulty in commanding her emotions.

“Constance,” said the invalid, after a pause, in which he seemed to have been gazing with a quiet heart on the soft skies, that, blue and eloquent with stars, he beheld through the unclosed windows:–“Constance, the hour is coming; I feel it by signs which I cannot mistake. I shall die this night.”

“No, child, no!–I loathe–I detest the thought of help. They denied it me while it was yet time. They left me to starve or to rot in gaol, or to hang myself! They left me like a dog, and like a dog I will die! I would not have one iota taken from the justice–the deadly and dooming weight of my dying curse.” Here violent spasms broke on the speech of the sufferer; and when, by medicine and his daughter’s attentions, he had recovered, he said, in a lower and calmer key:–“Is all quiet below, Constance? Are all in bed? The landlady–the servants–our fellow-lodgers?”

“Ay; then I shall die happy. Thank Heaven, you are my only nurse and attendant. I remember the day when I was ill after one of their rude debauches. Ill!–a sick headache–a fit of the spleen–a spoiled lapdog’s illness! Well: they wanted me that night to support one of their paltry measures–their parliamentary measures. And I had a prince feeling my pulse, and a duke mixing my draught, and a dozen earls sending their doctors to me. I was of use to them then! Poor me! Read me that note, Constance–Flamborough’s note. Do you hesitate? Read it, I say!”

I am really au desespoir to hear of your melancholy state;–so sorry I cannot assist you: but you know my embarrassed circumstances. By the by, I saw his Royal Highness yesterday. ‘Poor Vernon!’ said he; ‘would a hundred pounds do him any good?’ So we don’t forget you, mon cher. Ah! how we missed you at the Beefsteak! Never shall we know again so glorious a bona vivant. You would laugh to hear L—- attempting to echo your old jokes. But time presses: I must be off to the House. You know what a motion it is! Would to Heaven you were to bring it on instead of that ass T—-. Adieu! I wish I could come and see you; but it would break my heart. Can I send you any books from Hookham’s?