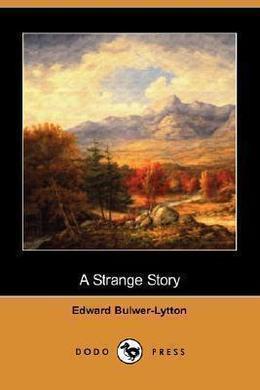 ‘A Strange Story’ is an extraordinary testament to the belief in and fascination with the Occult and spiritualism that was prevalent in nineteenth century society, and reflects Bulwer Lytton’s own particular views. The young hero, Doctor Allen Fenwick, is utterly unable to counteract the malign influence of the sinister mesmerist Margrave over his beloved, the mystical Lilian, by scientific methods - will this lead him to put aside his rationalist creed and embrace the notion of a world beyond our own?

In the year 18– I settled as a physician at one of the wealthiest of our great English towns, which I will designate by the initial L—-. I was yet young, but I had acquired some reputation by a professional work, which is, I believe, still amongst the received authorities on the subject of which it treats. I had studied at Edinburgh and at Paris, and had borne away from both those illustrious schools of medicine whatever guarantees for future distinction the praise of professors may concede to the ambition of students. On becoming a member of the College of Physicians, I made a tour of the principal cities of Europe, taking letters of introduction to eminent medical men, and gathering from many theories and modes of treatment hints to enlarge the foundations of unprejudiced and comprehensive’ practice. I had resolved to fix my ultimate residence in London. But before this preparatory tour was completed, my resolve was changed by one of those unexpected events which determine the fate man in vain would work out for himself. In passing through the Tyro, on my way into the north of Italy, I found in a small inn, remote from medical attendance, an English traveller seized with acute inflammation of the lungs, and in a state of imminent danger. I devoted myself to him night and day; and, perhaps more through careful nursing than active remedies, I had the happiness to effect his complete recovery. The traveller proved to be Julius Faber, a physician of great distinction, contented to reside, where he was born, in the provincial city of L—-, but whose reputation as a profound and original pathologist was widely spread, and whose writings had formed no unimportant part of my special studies. It was during a short holiday excursion, from which he was about to return with renovated vigour, that he had been thus stricken down. The patient so accidentally met with became the founder of my professional fortunes. He conceived a warm attachment for me,–perhaps the more affectionate because he was a childless bachelor, and the nephew who would succeed to his wealth evinced no desire to succeed to the toils by which the wealth had been acquired. Thus, having an heir for the one, he had long looked about for an heir to the other, and now resolved on finding that heir in me. So when we parted Dr. Faber made me promise to correspond with him regularly, and it was not long before he disclosed by letter the plans he had formed in my favour. He said that he was growing old; his practice was beyond his strength; he needed a partner; he was not disposed to put up to sale the health of patients whom he had learned to regard as his children: money was no object to him, but it was an object close at his heart that the humanity he had served, and the reputation he had acquired, should suffer no loss in his choice of a successor. In fine, he proposed that I should at once come to L—- as his partner, with the view of succeeding to his entire practice at the end of two years, when it was his intention to retire.

The opening into fortune thus afforded to me was one that rarely presents itself to a young man entering upon an overcrowded profession; and to an aspirant less allured by the desire of fortune than the hope of distinction, the fame of the physician who thus generously offered to me the inestimable benefits of his long experience and his cordial introduction was in itself an assurance that a metropolitan practice is not essential to a national renown.