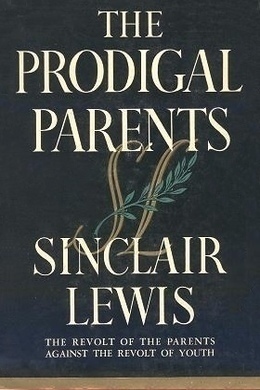 “The revolt of the parents against the revolt of youth as exemplified by a typical middle-class family of four.” Fred Cornplow, shrewd middle-class realist, gradually wakes to find that Sarah, his selfish college graduate daughter, and his son Howard, still irregularly playing football for old Truxon, think of him as intellectually obsolete, as a convenience, as a walking bank account to whom they need return neither affection nor thoughtfulness. If you are a father or a mother with young or grown-up children; if you are a young man or a young woman looking into the bewildering world beyond the shelter of parents or college; if you are curious about human problems today – Sinclair Lewis’ novel will absorb you and entertain you. With his genius for dramatizing thoughts that are on the threshold of every mind, he writes with affectionate sympathy of the problems of the successful man of fifty-five, his son and daughter, his wife, his business.

In the darkness of the country road after midnight the car was speeding, but the three young men jammed together in the one seat did not worry. They were exhilarated by the violence of the speeches they had heard at the strikers’ mass meeting in the factory town of Cathay. When the car skidded slightly on a turn and the left-hand wheels crunched on the gravelled shoulder, the driver yelped, ‘Hey, whoa-up!’ But she did not whoa-up.

They were not drunk, except with high spirits. They had had a few bottles of beer, but what intoxicated them was the drama of thick- necked, bright-eyed strike leaders denouncing the tyranny of the bosses, the press, the taxpayers and all other oppressors. Two of the young men were juniors in Truxon College, and as they considered themselves to have been frequently and ludicrously misjudged by their own bosses, their parents and professors, they would (they told themselves) have stayed on in Cathay, joined the picket line, brave with bricks and pick handles, and probably have been gloriously killed, had it not been for a critically important fraternity dance at Truxon next evening.

As a substitute for thus entering the martyrs’ profession, they now howled a song which stated that Labour was a Mighty Giant which was going to smash all its foemen immediately.

The third young man did not sing with them. He was a radical agitator; his name was Eugene Silga; he was slim and taut, with skin the colour of a cigar; and he had had quite enough singing in Cathay County Jail, a month ago. When the students stopped for breath, he protested, in the easy voice of a professional speaker, ‘You seem to think it’s going to be a cinch to overthrow the exploiting capitalist class–your own class, remember, you cursed sons of aristocrats. It’s not! It’ll take a lot more than singing to make Wall Street apologize to the Proletariat and go crawl in a hole.’

This driver was a tall, wide young man, with wavy hair of red gold, a Norse god with eyes like the Baltic Sea in summer, and a face handsome as a magazine cover and stupid as a domesticated carp. His name was Howard Cornplow, and he was an adept in football, in golf, and in finding reasons why, at any particular recitation hour, he knew nothing whatever about the epistemology of Plato’s Meno. He did know a great deal about the crawl stroke, however, which may have been just as well.

Howard Cornplow was a hearty young man, and he loved to argue. Accelerating a little, occasionally looking away from the road toward the agitator Silga, who sat in the dimness over beside the right-hand door, he shouted, ‘Oh, rats, Gene! Don’t you think if all us educated guys gang up on our folks, they’ll snap out of their fool ex-up-expropriating attitude?’

‘Now look here. You take my dad. Old Fred. I can argue him down till he skips out and slams the door.’

As Howard continued, it was revealed that this ‘dad’, motor dealer in the city of Sachem Falls, N.Y., was an acceptable fellow, and that he was chronically overcome by his son’s eloquence. Just to clarify it, Howard gave samples of the eloquence, and during the spirited recital he forgot that he was driving an automobile, and at sixty-five miles an hour.

‘Don’t you worry. I’m a careful driver,’ clucked the Norse god, as he happily developed his theme that, in order to be converted to loving communism, the stuffy, prosperous, middle-class merchants like Fred Cornplow needed nothing more than friendly tips from such up-to-date examples of the Youth Movement as Howard Cornplow, Eugene Silga, and Guy Staybridge, with a few explanations about how the economic system really worked.

The car swayed on an abrupt turning. Howard kept it snugly to the right. But this was an S-curve, and as Howard looked away from the road towards Eugene, accelerating a little in his triumphant high spirits, the car, in a hundredth of a second, in a madness of speed that had nothing to do with time by the watch, bolted across the ditch, bounded on turf, twisted–crushing the three young men closer together–half swung around, grazed a birch tree, smashed a fender and a headlight and half the hood, and came up short, while the huddle of three were jerked sidewise, then hurled toward the windshield.

Instantly, an incredible silence of night. The car’s lights were gone. Stillness and darkness clothed them in unreality. Nothing had happened. They were dead, worried Eugene Silga, as slowly he came to believe that he was not dead.