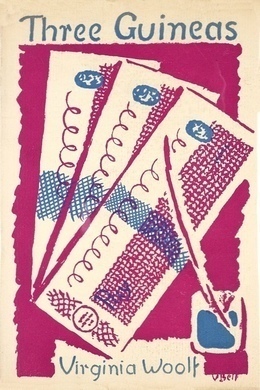 Three Guineas is written as a series of letters in which Woolf ponders the efficacy of donating to various causes to prevent war. In reflecting on her situation as the ‘daughter of an educated man’ in 1930s England, Woolf challenges liberal orthodoxies and marshals vast research to make discomforting and still-challenging arguments about the relationship between gender and violence, and about the pieties of those who fail to see their complicity in war-making. This pacifist-feminist essay is a classic whose message resonates loudly in our contemporary global situation.

Three years is a long time to leave a letter unanswered, and your letter has been lying without an answer even longer than that. I had hoped that it would answer itself, or that other people would answer it for me. But there it is with its question–How in your opinion are we to prevent war?–still unanswered.

It is true that many answers have suggested themselves, but none that would not need explanation, and explanations take time. In this case, too, there are reasons why it is particularly difficult to avoid misunderstanding. A whole page could be filled with excuses and apologies; declarations of unfitness, incompetence, lack of knowledge, and experience: and they would be true. But even when they were said there would still remain some difficulties so fundamental that it may well prove impossible for you to understand or for us to explain. But one does not like to leave so remarkable a letter as yours–a letter perhaps unique in the history of human correspondence, since when before has an educated man asked a woman how in her opinion war can be prevented?– unanswered. Therefore let us make the attempt; even if it is doomed to failure.

In the first place let us draw what all letter-writers instinctively draw, a sketch of the person to whom the letter is addressed. Without someone warm and breathing on the other side of the page, letters are worthless. You, then, who ask the question, are a little grey on the temples; the hair is no longer thick on the top of your head. You have reached the middle years of life not without effort, at the Bar; but on the whole your journey has been prosperous. There is nothing parched, mean or dissatisfied in your expression. And without wishing to flatter you, your prosperity– wife, children, house–has been deserved. You have never sunk into the contented apathy of middle life, for, as your letter from an office in the heart of London shows, instead of turning on your pillow and prodding your pigs, pruning your pear trees–you have a few acres in Norfolk–you are writing letters, attending meetings, presiding over this and that, asking questions, with the sound of the guns in your ears. For the rest, you began your education at one of the great public schools and finished it at the university.