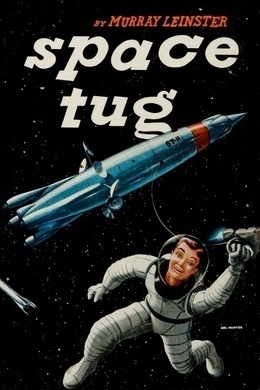 Joe had helped launch the first Space Platform–that initial rung in man’s ladder to the stars. But the enemies who had ruthlessly tried to destroy the space station before it left Earth were still at work. They were plotting to destroy Joe’s mission!

To the world at large, of course, it was just another day. A different sort entirely at different places on the great, round, rolling Earth, but nothing out of the ordinary. It was Tuesday on one side of the Date Line and Monday on the other. It was so-and-so’s wedding anniversary and so-and-so’s birthday and another so-and-so would get out of jail today. It was warm, it was cool, it was fair, it was cloudy. One looked forward to the future with confidence, with hope, with uneasiness or with terror according to one’s temperament and one’s geographical location and past history. To most of the human race this was nothing whatever but just another day.

But to Joe Kenmore it was a most particular day indeed. Here, it was the gray hour just before sunrise and already there were hints of reddish colorings in the sky. It was chilly, and somehow the world seemed still and breathless. To Joe, the feeling of tensity marked this morning off from all the other mornings of his experience.

He got up and began to dress, in Major Holt’s quarters back of that giant steel half-globe called the Shed, near the town of Bootstrap. He felt queer because he felt so much as usual. By all the rules, he should have experienced a splendid, noble resolution and a fiery exaltation, and perhaps even an admirable sensation of humility and unworthiness to accomplish what was expected of him today. And, deep enough inside, he felt suitable emotion. But it happened that he couldn’t take time to feel things adequately today.

He was much more aware that he wanted some coffee rather badly, and that he hoped everything would go all right. He looked out of the windows at empty, dreary desert under the dawn sky. Today was the day he’d be leaving on a rather important journey. He hoped that Haney and the Chief and Mike weren’t nervous. He also hoped that nobody had gotten at the fuel for the pushpots, and that the slide-rule crew that had calculated everything hadn’t made any mistakes. He was also bothered about the steering-rocket fuel, and he was uncomfortable about the business of releasing the spaceship from the launching cage. There was, too, cause for worry in the take-off rockets–if the tube linings had shrunk there would be some rather gruesome consequences–and there could always be last-minute orders from Washington to delay or even cancel everything.

In short, his mind was full of strictly practical details. He didn’t have time to feel noble aspirations or sensations of high destiny. He had a very tricky and exacting job ahead of him.

The sky was growing lighter outside. Stars faded in a paling blue and the desert showed faint colorings. He tied his necktie. A deep-toned keening set up off to the southward, over the sere and dreary landscape. It was a faraway noise, something like the lament of a mountain-sized calf bleating for its mother. Joe took a deep breath. He looked, but saw nothing. The noise, though, told him that there’d been no cancellation of orders so far. He mentally uncrossed one pair of fingers. He couldn’t possibly cross fingers against all foreseeable disasters. There weren’t enough fingers–or toes either. But it was good that so far the schedule held.

He went downstairs. Major Holt was pacing up and down the living room of his quarters. Electric lights burned, but already the windows were brightening. Joe straightened up and tried to look casual. Strictly speaking, Major Holt was a family friend who happened also to be security officer here, in charge of protecting what went on in the giant construction Shed. He’d had a sufficiently difficult time of it in the past, and the difficulties might keep on in the future. He was also the ranking officer here and consequently the immediate boss of Joe’s enterprise. Today’s affair was still highly precarious. The whole thing was controversial and uncertain and might spoil the career of somebody with stars on his collar if it should fail. So nobody in the high brass wanted the responsibility. If everything went well, somebody suitable would take the credit and the bows. Meanwhile Major Holt was boss by default.

He looked sharply at Joe. “Morning.”