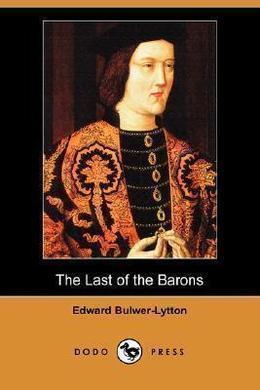 The Last of the Barons

Considered Bulwer-Lytton’s best romance novel, in The Last of the Barons, as in Harold, the aim has been to illustrate the actual history of the period, and to bring into fuller display than general History itself has done the characters of the principal personages of the time, the motives by which they were probably actuated, the state of parties, the condition of the people, and the great social interests which were involved in what, regarded imperfectly, appear but the feuds of rival factions.

Westward, beyond the still pleasant, but even then no longer solitary, hamlet of Charing, a broad space, broken here and there by scattered houses and venerable pollards, in the early spring of 1467, presented the rural scene for the sports and pastimes of the inhabitants of Westminster and London. Scarcely need we say that open spaces for the popular games and diversions were then numerous in the suburbs of the metropolis,–grateful to some the fresh pools of Islington; to others, the grass-bare fields of Finsbury; to all, the hedgeless plains of vast Mile-end. But the site to which we are now summoned was a new and maiden holiday-ground, lately bestowed upon the townsfolk of Westminster by the powerful Earl of Warwick.

Raised by a verdant slope above the low, marsh-grown soil of Westminster, the ground communicated to the left with the Brook-fields, through which stole the peaceful Ty-bourne, and commanded prospects, on all sides fair, and on each side varied. Behind, rose the twin green hills of Hampstead and Highgate, with the upland park and chase of Marybone,–its stately manor-house half hid in woods. In front might be seen the Convent of the Lepers, dedicated to Saint James, now a palace; then to the left, York House, [The residence of the Archbishops of York] now Whitehall; farther on, the spires of Westminster Abbey and the gloomy tower of the Sanctuary; next, the Palace, with its bulwark and vawmure, soaring from the river; while eastward, and nearer to the scene, stretched the long, bush-grown passage of the Strand, picturesquely varied with bridges, and flanked to the right by the embattled halls of feudal nobles, or the inns of the no less powerful prelates; while sombre and huge amidst hall and inn, loomed the gigantic ruins of the Savoy, demolished in the insurrection of Wat Tyler. Farther on, and farther yet, the eye wandered over tower and gate, and arch and spire, with frequent glimpses of the broad sunlit river, and the opposite shore crowned by the palace of Lambeth, and the Church of St. Mary Overies, till the indistinct cluster of battlements around the Fortress-Palatine bounded the curious gaze. As whatever is new is for a while popular, so to this pastime-ground, on the day we treat of, flocked, not only the idlers of Westminster, but the lordly dwellers of Ludgate and the Flete, and the wealthy citizens of tumultuous Chepe.

The ground was well suited to the purpose to which it was devoted. About the outskirts, indeed, there were swamps and fish-pools; but a considerable plot towards the centre presented a level sward, already worn bare and brown by the feet of the multitude. From this, towards the left, extended alleys, some recently planted, intended to afford, in summer, cool and shady places for the favourite game of bowls; while scattered clumps, chiefly of old pollards, to the right broke the space agreeably enough into detached portions, each of which afforded its separate pastime or diversion. Around were ranged many carts, or wagons; horses of all sorts and value were led to and fro, while their owners were at sport. Tents, awnings, hostelries, temporary buildings, stages for showmen and jugglers, abounded, and gave the scene the appearance of a fair; but what particularly now demands our attention was a broad plot in the ground, dedicated to the noble diversion of archery. The reigning House of York owed much of its military success to the superiority of the bowmen under its banners, and the Londoners themselves were jealous of their reputation in this martial accomplishment. For the last fifty years, notwithstanding the warlike nature of the times, the practice of the bow, in the intervals of peace, had been more neglected than seemed wise to the rulers. Both the king and his loyal city had of late taken much pains to enforce the due exercise of “Goddes instrumente,” [So called emphatically by Bishop Latimer, in his celebrated Sixth Sermon.] upon which an edict had declared that “the liberties and honour of England principally rested!”

And numerous now was the attendance, not only of the citizens, the burghers, and the idle populace, but of the gallant nobles who surrounded the court of Edward IV., then in the prime of his youth,–the handsomest, the gayest, and the bravest prince in Christendom.