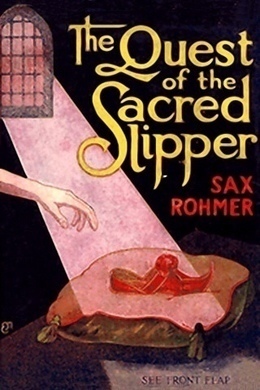 The Quest of the Sacred Slipper

With the theft of the sacred slipper, rumored to have been worn by the great Prophet himself, came a wave of outrageous horror. Weird, supernatural feats accompanied its movement from the Near East to a London museum. Mutilation, even murder, threatened all who came near it. It was as if a horde of phantoms had descended upon London, whose guardians were soon plunged into fear and dread. And then the truth emerged. Behind these inhuman outrages was a secret group of fanatics–Assassins–trained from childhood to wreak havoc on all who dared disturb their sacred relics. Not even the best men of Scotland Yard seemed able to apprehend them. For, in some mystical way, this phantom band had never been seen or even heard…

I was not the only passenger aboard the S.S. Mandalay who perceived the disturbance and wondered what it might portend and from whence proceed. A goodly number of passengers were joining the ship at Port Said. I was lounging against the rail, pipe in mouth, lazily wondering, with a large vagueness.

What a heterogeneous rabble it was!–a brightly coloured rabble, but the colours all were dirty, like the town and the canal. Only the sky was clean; the sky and the hard, merciless sunlight which spared nothing of the uncleanness, and defied one even to think of the term dear to tourists, “picturesque.” I was in that kind of mood. All the natives appeared to be pockmarked; all the Europeans greasy with perspiration.

But what was the stir about?

I turned to the dark, bespectacled young man who leaned upon the rail beside me. From the first I had taken to Mr. Ahmad Ahmadeen.

“There is some kind of undercurrent of excitement among the natives,” I said, “a sort of subdued Greek chorus is audible. What’s it all about?”

Mr. Ahmadeen smiled. After a gaunt fashion, he was a handsome man and had a pleasant smile.

“Probably,” he replied, “some local celebrity is joining the ship.”

I stared at him curiously.

“Any idea who he is?” (The soul of the copyhunter is a restless soul.)

A group of men dressed in semi-European fashion–that is, in European fashion save for their turbans, which were green–passed close to us along the deck.

Ahmadeen appeared not to have heard the question.

The disturbance, which could only be defined as a subdued uproar, but could be traced to no particular individual or group, grew momentarily louder–and died away. It was only when it had completely ceased that one realized how pronounced it had been–how altogether peculiar, secret; like that incomprehensible murmuring in a bazaar when, unknown to the insular visitor, a reputed saint is present.

Then it happened; the inexplicable incident which, though I knew it not, heralded the coming of strange things, and the dawn of a new power; which should set up its secret standards in England, which should flood Europe and the civilized world with wonder.

A shrill scream marked the overture–a scream of fear and of pain, which dropped to a groan, and moaned out into the silence of which it was the cause.

I started forward. There was a general crowding rush, and a darkly tanned and bearded man came on board, carrying a brown leather case. Behind him surged those who bore the victim.

“Stand away there, if you please!”

That was a ship’s officer; and the voice of authority served to quell the disturbance. Through a lane walled with craning heads they bore the insensible man. Ahmadeen was at my elbow.

“A Copt,” he said softly. “Poor devil!” I turned to him. There was a queer expression on his lean, clean-shaven, bronze face.

That was the fact of the matter. And no one knew who was responsible for the atrocity. And no one knew what had become of the severed hand! I wasted not a moment in linking up the story. The pressman within me acted automatically.

“The gentleman just come aboard, sir,” said a steward, “is Professor Deeping. The poor beggar who was assaulted was carrying some of the Professor’s baggage.” The whole incident struck me as most odd. There was an idea lurking in my mind that something else–something more–lay behind all this. With impatience I awaited the time when the injured man, having received medical attention, was conveyed ashore, and Professor Deeping reappeared. To the celebrated traveller and Oriental scholar I introduced myself.

He was singularly reticent.

“I was unable to see what took place, Mr. Cavanagh,” he said. “The poor fellow was behind me, for I had stepped from the boat ahead of him. I had just taken a bag from his hand, but he was carrying another, heavier one. It is a clean cut, like that of a scimitar. I have seen very similar wounds in the cases of men who have suffered the old Moslem penalty for theft.”

Nothing further had come to light when the Mandalay left, but I found new matter for curiosity in the behaviour of the Moslem party who had come on board at Port Said.

In conversation with Mr. Bell, the chief officer, I learned that the supposed leader of the party was one, Mr. Azraeel. “Obviously,” said Bell, “not his real name or not all it. I don’t suppose they’ll show themselves on deck; they’ve got their own servants with them, and seem to be people of consequence.”