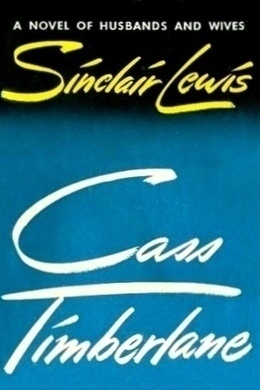 Cass Timberlane, which explores themes of love, marriage, heartache, trust & redemption in the small city of Grand Republic in Central Minnesota, is entirely imaginary, as are all the characters. The characters will be ‘identified,’ each of them with several different real persons in each of the Minnesota cities: in Minneapolis, St. Paul, Winona, St. Cloud, Mankato, Fergus Falls and particularly, since it is only a little larger than Grand Republic, in the radiant, sea-fronting, hillside city of Duluth. All such guesses will be wrong, but they will be so convincing that even the writer will be astonished to learn how exactly he has drawn some judge or doctor or banker or housewife of whom he has never heard, or regretful to discover how poisonously he is supposed to have described people of whom he is particularly fond.

Until Jinny Marshland was called to the stand, the Judge was deplorably sleepy.

The case of Miss Tilda Hatter vs. the City of Grand Republic had been yawning its way through testimony about a not very interesting sidewalk. Plaintiff’s attorney desired to show that the city had been remarkably negligent in leaving upon that sidewalk a certain lump of ice which, on February 7, 1941, at or about the hour of 9:37 P.M., had caused the plaintiff to slip, to slide, and to be prone upon the public way, in a state of ignominy and sore pain. There had been an extravagant amount of data as to whether the lump of ice had been lurking sixteen, eighteen, or more than eighteen feet from the Clipper Hardware Store. And all that May afternoon the windows had been closed, to keep out street noises, and the court room had smelled, as it looked, like a schoolroom.

Timberlane, J., was in an agony of drowsiness. He was faithful enough, and he did not miss a word, but he heard it all as in sleep one hears malignant snoring.

He was a young judge: the Honorable Cass Timberlane, of the Twenty- Second Judicial District, State of Minnesota. He was forty-one, and in his first year on the bench, after a term in Congress. He was a serious judge, a man of learning, a believer in the majesty of the law, and he looked like a tall Red Indian. But he was wishing that he were out bass-fishing, or at home, reading Walden or asleep on a cool leather couch.

All the spectators in the room, all five of them, were yawning and chewing gum. The learned counsel for the plaintiff, Mr. Hervey Plint, the dullest lawyer in Grand Republic, a middle-aged man with a miscellaneous sort of face, was questioning Miss Hatter. He was a word-dragger, an uh’er, a looker to the ceiling for new thoughts.

“Uh–Miss Hatter, now will you tell us what was the–uh–the purpose of your going out, that evening–I mean, I mean how did you happen to be out on an evening which–I think all the previous testimony agrees that it was, well, I mean, uh, you might call it an inclement evening, but not such as would have prevented the, uh, the adequate cleaning of the thoroughfares–”

Sitting above them on the bench like Chief Iron Cloud, a lean figure of power, the young father of his people, Judge Timberlane started to repeat the list of presidents, a charm which usually would keep him awake. He got through it fairly well, stumbling only on Martin Van Buren and Millard Fillmore, as was reasonable, but he remained as sleepy as ever.

Without missing any of Miss Hatter’s more spectacular statements, His Honor plunged into the Counties of Minnesota, all eighty-seven of them, with their several county-seats:

He had reached “Olmsted–Rochester” when he perceived that Miss Hatter had gone back to her natural mummy-case, and the clerk was swearing in a witness who pricked His Honor into wakefulness.

–How did I ever miss seeing her, in a city as small as this? Certainly not four girls in town that are as pretty, he reflected.

The new witness was a half-tamed hawk of a girl, twenty-three or -four, not tall, smiling, lively of eye. The light edged gently the clarity of her cheeks, but there was something daring in her delicate Roman nose, her fierce black hair. Her gray suit indicated prosperity, which in Grand Republic was respectability.

–Be an exciting kid to know, thought Timberlane, J., that purist and precisionist and esteemed hunter of ducks, that chess-player and Latinist, who was a man unmarried–at least, unmarried since his recent and regrettable divorce.

The young woman alighted on the oak witness-chair like a swallow on a tombstone.

Counselor Plint said gloomily, “Will you please just give us your, uh, your name and profession and address, please?”