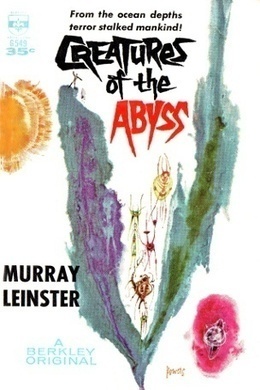 Creatures of the Abyss

Orejas de ellos, the things who listen, whispered the superstitious fishermen when the strange occurrences began off the Philippine coast. How else could you explain the sudden disappearance of a vessel beneath a mysterious curtain of foam? The writhings of thousands of maddened fish trapped in a coffin-like area of ocean? An alien intelligence gorged at the bottom of the Luzon Deep and made its plans. Radar expert Terry Holt and the crew of the Experance had to devise a weapon against the horrifying creatures which threatened mankind with extinction. Here are terror, excitement, and the clutch of cold death as combined by a master hand in the field of science-fiction.

The moment arrived when Terry Holt realized that he was simply holding the bag for Jimenez y Cía.–Jimenez and Company–in the city of Manila. He wasn’t getting anywhere, himself. So, painfully, he prepared to wind up the company’s affairs and his own, and start over. It seemed appropriate to take inventory, consult the police–they’d been both amiable and co-operative–and then make new plans. But first it would be a good idea to go somewhere else for a while, until the problem presented by La Rubia and radar and fish and orejas de ellos had been settled. He was at work on the inventory when the door opened, the warning-bell tinkled, and the girl came into the shop.

He looked up with a wary eye, glancing over the partition separating the workshop area in which the merchandise sold by Jimenez y Cía. was assembled. There were certain people he felt should not come into the shop. The police agreed with him. He was prepared to throw out anybody who came either to demand that he build something or else, or to demand that he not build it or else. In such forcible ejections he would be backed by the authorities of the city and the Philippine Republic.

But this customer was a girl. She was a pretty girl. She was pleasantly tanned. Her make-up, if she wore any, looked natural, and she carried a sizable parcel under her arm. She turned to close the door behind her. She was definitely from the United States. So Terry said in English, “Good afternoon. Can I do something for you?”

“Ah! We can talk English,” she said gratefully. “I was afraid I’d have trouble. I do have trouble with Spanish.”

Terry came out from behind the partition marking off the workshop. The shop was seventeen feet wide and its larger expanse of plate glass said, “Jimenez y Cía.” in large letters. Terry’s now-vanished partner Jimenez had liked to see his name in large print. Under the name was the line “Especialidades Electrónicas y Físicas.” This was Terry’s angle. He assembled specialties in the line of electronics and modern physics. Jimenez had sold them, not wisely but too well. At the bottom corner of the window there was a modest statement: “Orejas de Ellos,” which meant nothing to anybody but certain commercial fishermen, all of whom would deny it.

“But I’m not sure this is the right shop,” she said. “I’m not looking for iceboxes.”

“They’re window-dressing,” said Terry. “My former business associate tried to run an appliance shop. But the people who buy such things in Manila only want the latest models. He got stuck with these from last year. So we do–I did do–especialidades electrónicas y físicas. But I’m shutting up shop. What are you looking for?”

The shop was in an appropriate place for its former products. Outside on the Calle Enero there were places where one could buy sea food in quantity, mother-of-pearl, pitch, coir rope, bêche-de-mer, copra, fuel oil, Diesel repair-parts and edible birds’ nests. Especialidades fitted in. But though it was certainly respectable enough, this neighborhood wasn’t exactly where one would have expected to find a girl like this shopping for what a girl like this would shop for.

“I’m looking,” she explained, “for somebody to make up a special device, probably electronic, for my father’s boat.”

“Ah!” said Terry regretfully. “That’s my line exactly, as is evidenced in Spanish on the window and in Tagalog, Malay and Chinese on cards you can read through the glass. But I’m suspending operations for a while. What kind of special device? Radar–No. I doubt you’d want orejas de ellos….”

“Submarine ears,” said Terry. “For fishing boats. The name is no clue at all. They pick up underwater sounds, enabling one to hear surf a long way off. Which may be useful. And some fish make noises and the fishermen use these ears to eavesdrop on them and catch them. You wouldn’t be interested in anything of that sort!”

“But I am! Something very much like it, at any rate. Take a look at this and see what my father wants to have made.”

She put her parcel on a deep-freeze unit and pulled off its paper covering. The object inside was a sort of curved paddle with a handle at one end. It was about three feet long, made of a light-colored fibrous wood, and on the convex part of its curvature it was deeply carved in peculiar transverse ridges.

“A fish-driving paddle,” she explained. “From Alua.”

He looked it over. He knew vaguely that Alua was an island somewhere near Bohol.