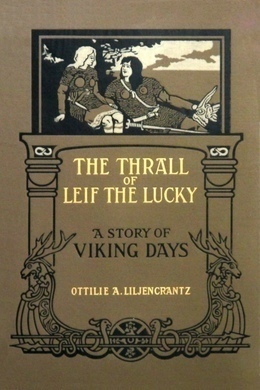 The Thrall of Leif the Lucky

A Story of Viking Days

Leif Ericsson, also known as ‘Leif the Lucky’, was the second son of Erik the Red and certainly displayed the Viking spirit of adventure and exploration. As a young man Leif Ericsson visited Norway, where he converted to Christianity. He was charged with returning to Greenland to convert the populace, but instead sailed further west and is believed to have landed somewhere in Nova Scotia. He spent a year in North America before returning home to Greenland, where he served as governor. The film The Viking (1928) was based on this novel, which has, to some extent, been based on Viking history.

It was back in the tenth century, when the mighty fair-haired warriors of Norway and Sweden and Denmark, whom the people of Southern Europe called the Northmen, were becoming known and dreaded throughout the world. Iceland and Greenland had been colonized by their dauntless enterprise. Greece and Africa had not proved distant enough to escape their ravages. The descendants of the Viking Rollo ruled in France as Dukes of Normandy; and Saxon England, misguided by Ethelred the Unready and harassed by Danish pirates, was slipping swiftly and surely under Northern rule. It was the time when the priests of France added to their litany this petition: “From the fury of the Northmen, deliver us, good Lord.”

The old, old Norwegian city of Trondhjem, which lies on Trondhjem Fiord, girt by the river Nid, was then King Olaf Trygvasson’s new city of Nidaros, and though hardly more than a trading station, a hamlet without streets, it was humming with prosperity and jubilant life. The shore was fringed with ships whose gilded dragon-heads and purple-and-yellow hulls and azure-and-scarlet sails were reflected in the waves until it seemed as if rainbows had been melted in them. Hillside and river-bank bloomed with the gay tents of chieftains who had come from all over the North to visit the powerful Norwegian king. Traders had scattered booths of tempting wares over the plain, so that it looked like fair-time. The broad roads between the estates that clustered around the royal residence were thronged with clanking horsemen, with richly dressed traders followed by covered carts of precious merchandise, with beautiful fair-haired women riding on gilded chair-like saddles, with monks and slaves, with white-bearded lawmen and pompous landowners.

Along one of those roads that crossed the city from the west, a Danish warrior came riding, one keen May morning, with a young English captive tied to his saddle-bow.

The Northman was a great, hulking, wild-maned, brute-faced fellow, capped by an iron helmet and wrapped in a mantle of coarse gray, from whose folds the handle of a battle-axe looked out suggestively; but the boy was of the handsomest Saxon type. Though barely seventeen, he was man-grown, and lithe and well-shaped; and he carried himself nobly, despite his clumsy garments of white wool. His gold-brown hair had been clipped close as a mark of slavery, and there were fetters on his limbs; but chains could not restrain the glance of his proud gray eyes, which flashed defiance with every look.

Crossing the city northward, they came where a trading-booth stood on its outskirts–an odd looking place of neatly built log walls tented over with gay striped linen. Beyond, the plain rose in gentle hills, which were overlooked in their turn by pine-clad snow-capped mountains. On one side, the river hurried along in surging rapids; on the other, one could see the broad elbow of the fiord glittering in the sun. At the sight of the booth, the Saxon scowled darkly, while the Dane gave a grunt of relief. Drawing rein before the door, the warrior dismounted and pulled down his captive.

It was a scene of barbaric splendor that the gay roof covered. The walls displayed exquisitely wrought weapons, and rare fabrics interwoven with gleaming gold and silver threads. Piles of rich furs were heaped in the corners, amid a medley of gilded drinking-horns and bronze vessels and graceful silver urns. Across the back of the booth stretched a benchful of sullen-looking creatures war-captives to be sold as slaves, native thralls, and two Northmen enslaved for debt. In the centre of the floor, seated upon one of his massive steel-bound chests, gorgeous in velvet and golden chains, the trader presided over his sales like a prince on his throne.

The Dane saluted him with a surly nod, and he answered with such smooth words as the thrifty old Norse proverbs advise every man to practise.

“Greeting, Gorm Arnorsson! Here is great industry, if already this Spring you have gone on a Viking voyage and gotten yourself so good a piece of property! How came you by him?”

Gorm gave his “property” a rough push forward, and his harsh voice came out of his bull-thick neck like a bellow. “I got him in England last Summer. We ravaged his father’s castle, I and twenty ship-mates, and slew all his kinsmen. He comes of good blood; I am told for certain that he is a jarl’s son. And I swear he is sound in wind and limb. How much will you pay me for him, Karl Grimsson?”