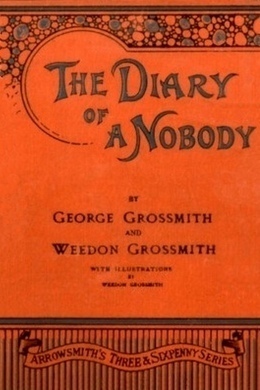 The Diary of a Nobody

The Diary of a Nobody is so unassuming a work that even its author, George Grossmith, seemed unaware that he had produced a masterpiece. For more than a century this wonderfully comic portrayal of suburban life and values has remained in print, a source of delight to generations of readers, and a major literary influence, much imitated but never equalled. I fail to see - because I do not happen to be a ‘Somebody’ - why my diary should not be interesting. Mr Pooter is a man of modest ambitions, content with his ordinary life. Yet he always seems to be troubled by disagreeable tradesmen, impertinent young office clerks and wayward friends, not to mention his devil-may-care son Lupin with his unsuitable choice of bride. Try as he might, he cannot avoid life’s embarrassing mishaps. In the bumbling, absurd, yet ultimately endearing figure of Pooter, the Grossmiths created an immortal comic character and a superb satire on the snobberies of middle-class suburbia - one which also sends up late Victorian crazes for spiritualism and bicycling, as well as the fashion for publishing diaries by anybody and everybody.

We settle down in our new home, and I resolve to keep a diary. Tradesmen trouble us a bit, so does the scraper. The Curate calls and pays me a great compliment.

My dear wife Carrie and I have just been a week in our new house, “The Laurels,” Brickfield Terrace, Holloway—a nice six-roomed residence, not counting basement, with a front breakfast-parlour. We have a little front garden; and there is a flight of ten steps up to the front door, which, by-the-by, we keep locked with the chain up. Cummings, Gowing, and our other intimate friends always come to the little side entrance, which saves the servant the trouble of going up to the front door, thereby taking her from her work. We have a nice little back garden which runs down to the railway. We were rather afraid of the noise of the trains at first, but the landlord said we should not notice them after a bit, and took £2 off the rent. He was certainly right; and beyond the cracking of the garden wall at the bottom, we have suffered no inconvenience.

After my work in the City, I like to be at home. What’s the good of a home, if you are never in it? “Home, Sweet Home,” that’s my motto. I am always in of an evening. Our old friend Gowing may drop in without ceremony; so may Cummings, who lives opposite. My dear wife Caroline and I are pleased to see them, if they like to drop in on us. But Carrie and I can manage to pass our evenings together without friends. There is always something to be done: a tin-tack here, a Venetian blind to put straight, a fan to nail up, or part of a carpet to nail down—all of which I can do with my pipe in my mouth; while Carrie is not above putting a button on a shirt, mending a pillow-case, or practising the “Sylvia Gavotte” on our new cottage piano (on the three years’ system), manufactured by W. Bilkson (in small letters), from Collard and Collard (in very large letters). It is also a great comfort to us to know that our boy Willie is getting on so well in the Bank at Oldham. We should like to see more of him. Now for my diary:—

APRIL 3.—Tradesmen called for custom, and I promised Farmerson, the ironmonger, to give him a turn if I wanted any nails or tools. By-the-by, that reminds me there is no key to our bedroom door, and the bells must be seen to. The parlour bell is broken, and the front door rings up in the servant’s bedroom, which is ridiculous. Dear friend Gowing dropped in, but wouldn’t stay, saying there was an infernal smell of paint.

APRIL 4. Tradesmen still calling; Carrie being out, I arranged to deal with Horwin, who seemed a civil butcher with a nice clean shop. Ordered a shoulder of mutton for to-morrow, to give him a trial. Carrie arranged with Borset, the butterman, and ordered a pound of fresh butter, and a pound and a half of salt ditto for kitchen, and a shilling’s worth of eggs. In the evening, Cummings unexpectedly dropped in to show me a meerschaum pipe he had won in a raffle in the City, and told me to handle it carefully, as it would spoil the colouring if the hand was moist. He said he wouldn’t stay, as he didn’t care much for the smell of the paint, and fell over the scraper as he went out. Must get the scraper removed, or else I shall get into a scrape. I don’t often make jokes.

APRIL 5.—Two shoulders of mutton arrived, Carrie having arranged with another butcher without consulting me. Gowing called, and fell over scraper coming in. Must get that scraper removed.

APRIL 6.—Eggs for breakfast simply shocking; sent them back to Borset with my compliments, and he needn’t call any more for orders. Couldn’t find umbrella, and though it was pouring with rain, had to go without it. Sarah said Mr. Gowing must have took it by mistake last night, as there was a stick in the ‘all that didn’t belong to nobody. In the evening, hearing someone talking in a loud voice to the servant in the downstairs hall, I went out to see who it was, and was surprised to find it was Borset, the butterman, who was both drunk and offensive. Borset, on seeing me, said he would be hanged if he would ever serve City clerks any more—the game wasn’t worth the candle. I restrained my feelings, and quietly remarked that I thought it was possible for a city clerk to be a gentleman. He replied he was very glad to hear it, and wanted to know whether I had ever come across one, for he hadn’t. He left the house, slamming the door after him, which nearly broke the fanlight; and I heard him fall over the scraper, which made me feel glad I hadn’t removed it. When he had gone, I thought of a splendid answer I ought to have given him. However, I will keep it for another occasion.