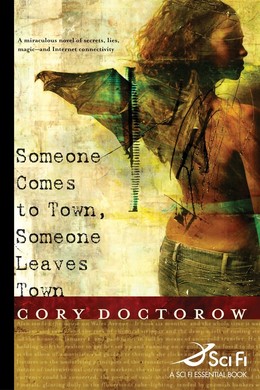 Someone Comes to Town, Someone Leaves Town

Alan is a middle-aged entrepreneur in contemporary Toronto, who has devoted himself to fixing up a house in a bohemian neighborhood. This naturally brings him in contact with the house full of students and layabouts next door, including a young woman who, in a moment of stress, reveals to him that she has wings–wings, moreover, which grow back after each attempt to cut them off. Alan understands. He himself has a secret or two. His father is a mountain; his mother is a washing machine; and among his brothers are a set of Russian nesting dolls. Now two of the three nesting dolls, Edward and Frederick, are on his doorstep–well on their way to starvation, because their innermost member, George, has vanished. It appears that yet another brother, Davey, who Alan and his other siblings killed years ago, may have returned…bent on revenge. Under such circumstances it seems only reasonable for Alan to involve himself with a visionary scheme to blanket Toronto with free wireless Internet connectivity, a conspiracy spearheaded by a brilliant technopunk who builds miracles of hardware from parts scavenged from the city’s dumpsters. But Alan’s past won’t leave him alone–and Davey is only one of the powers gunning for him and all his friends.

Alan sanded the house on Wales Avenue. It took six months, and the whole time it was the smell of the sawdust, ancient and sweet, and the reek of chemical stripper and the damp smell of rusting steel wool.

Alan took possession of the house on January 1, and paid for it in full by means of an e-gold transfer. He had to do a fair bit of hand-holding with the realtor to get her set up and running on e-gold, but he loved to do that sort of thing, loved to sit at the elbow of a novitiate and guide her through the clicks and taps and forms. He loved to break off for impromptu lectures on the underlying principles of the transaction, and so he treated the poor realtor lady to a dozen addresses on the nature of international currency markets, the value of precious metal as a kind of financial lingua franca to which any currency could be converted, the poetry of vault shelves in a hundred banks around the world piled with the heaviest of metals, glinting dully in the fluorescent tube lighting, tended by gnomish bankers who spoke a hundred languages but communicated with one another by means of this universal tongue of weights and measures and purity.

The clerks who’d tended Alan’s many stores – the used clothing store in the Beaches, the used book-store in the Annex, the collectible tin-toy store in Yorkville, the antique shop on Queen Street – had both benefited from and had their patience tried by Alan’s discursive nature. Alan had pretended never to notice the surreptitious rolling of eyes and twirling fingers aimed templewise among his employees when he got himself warmed up to a good oration, but in truth very little ever escaped his attention. His customers loved his little talks, loved the way he could wax rhapsodic about the tortured prose in a Victorian potboiler, the nearly erotic curve of a beat-up old table leg, the voluminous cuffs of an embroidered silk smoking jacket. The clerks who listened to Alan’s lectures went on to open their own stores all about town, and by and large, they did very well.

He’d put the word out when he bought the house on Wales Avenue to all his protégés: Wooden bookcases! His cell-phone rang every day, bringing news of another wooden bookcase found at this flea market, that thrift store, this rummage sale or estate auction.

He had a man he used part-time, Tony, who ran a small man-with-van service, and when the phone rang, he’d send Tony over to his protégé’s shop with his big panel van to pick up the case and deliver it to the cellar of the house on Wales Avenue, which was ramified by cold storages, root cellars, disused coal chutes and storm cellars. By the time Alan had finished with his sanding, every nook and cranny of the cellar was packed with wooden bookcases of every size and description and repair.

Alan worked through the long Toronto winter at his sanding. The house had been gutted by the previous owners, who’d had big plans for the building but had been tempted away by a job in Boston. They’d had to sell fast, and no amount of realtor magic – flowers on the dining-room table, soup simmering on the stove – could charm away the essential dagginess of the gutted house, the exposed timbers with sagging wires and conduit, the runnels gouged in the floor by careless draggers of furniture. Alan got it for a song, and was delighted by his fortune.

He was drunk on the wood, of course, and would have paid much more had the realtor noticed this, but Alan had spent his whole life drunk on trivial things from others’ lives that no one else noticed and he’d developed the alcoholic’s knack of disguising his intoxication. Alan went to work as soon as the realtor staggered off, reeling with a New Year’s Day hangover. He pulled his pickup truck onto the frozen lawn, unlocked the Kryptonite bike lock he used to secure the camper bed, and dragged out his big belt sander and his many boxes of sandpaper of all grains and sizes, his heat strippers and his jugs of caustic chemical peeler. He still had his jumbled, messy place across town in a nondescript two-bedroom on the Danforth, would keep on paying the rent there until his big sanding project was done and the house on Wales Avenue was fit for habitation.

Alan’s sanding project: First, finish gutting the house. Get rid of the substandard wiring, the ancient, lead-leaching plumbing, the cracked tile and water-warped crumbling plaster. He filled a half-dozen dumpsters, working with Tony and Tony’s homie Nat, who was happy to help out in exchange for cash on the barrelhead, provided that he wasn’t required to report for work on two consecutive days, since he’d need one day to recover from the heroic drinking he’d do immediately after Alan laid the cash across his palm.

Once the house was gutted to brick and timber and delirious wood, the plumbers and the electricians came in and laid down their straight shining ducts and pipes and conduit.