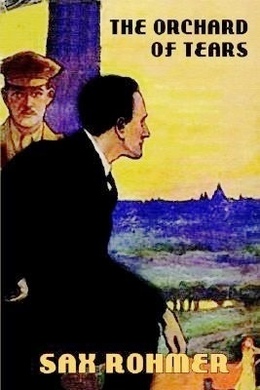 The Orchard of Tears

In this very strange and striking romance, the author has added a remarkable charcter to fiction in the person of the world-dreamer and idealist Paul Merle. Here is Rohmer’s most ambitious work, revealing his thoughts and philosophies more clearly than the sensational works for which he is best known. “To the slaves of the pomegranate, sons of Adam and daughters of Eve, who drink at the fountain of life, this chalice is offered as a loving-cup”.

It was high noon of a perfect summer’s day. Beneath green sun blinds, upon the terrace overlooking the lawns, Paul Mario, having finished his lunch, lay back against the cushions of a white deck-chair and studied the prospect. Sloping turf, rose-gay paths, and lichened brick steps, hollowed with age, zigzagging leisurely down to the fir avenue, carried the eye onward again to where the river wound its way through verdant banks toward the distant town.

A lark wooed the day with sweet music. Higher and ever higher rose the little sun-worshipper, pouring out his rapturous hymn to Apollo. Swallows, who but lately had crossed the battlefields of southern Europe, glided around Hatton Towers, describing mystic figures in the air, whilst the high feeble chirping of the younger generation sounded from the nests beneath the eaves. Amid the climbing roses bees were busy, their communal labours an object-lesson for self-seeking man; and almost at Mario’s feet a company of ants swarmed over the yet writhing body of an unfortunate caterpillar, who had dropped from an apple-tree to fall a prey to that savage natural law of death to the weak. The harsh voice of a sentinel crow spoke from a neighbouring cornfield, and a cloud of dusky marauders took the air instantly, and before the sharp crack of the farmer’s fowling-piece came to confirm the warning. In the hush of noon the tones of some haymakers at their patriarchal labours in a meadow beyond the stream were clearly audible–and the atmosphere constantly vibrated with remote booming of guns on the Western front.

Paul Mario was sufficiently distinguished in appearance to have been a person of no importance. His virile, curling black hair had the raven’s-wing sheen betraying remote Italian forebears, and for that matter there was in his entire cast of countenance and the poise of his fine head something statuesquely Roman, Southern, exotic. His large but deep-set eyes were of so dark a blue as very generally to pass for “black”; and whilst in some moods they were soft and dreamy, in others, notably in moments of enthusiasm, they burnt darkly fierce in his pale olive face. In profile there was a certain resemblance to the Vatican head of Julius Caesar, save for the mouth, which had more gentle curves, and which was not unlike that of Dante; but seen full-face, and allowing for the fact that Paul Mario was clean-shaven, the likeness of feature to the traditional Christ was startling. This resemblance is equally notable in the face of Shakespeare.

Rather above medium height, well but slightly proportioned, the uneasy spirit of the man ever looking out of those arresting eyes so wholly dominated him as to create a false impression of fragility, of a casket too frail to confine the burning, eager soul within. His emotions were dynamic, and in his every mannerism there was distinction. The vein of femininity which is found in all creative artists betrayed itself in one item of Mario’s attire: a white French knot, which slightly overlay the lapels of his well-worn Norfolk jacket.

To the world’s caricaturists, when Paul Mario, at the age of twenty-six, had swept across the literary terrain, storming line after line, the white knot had proved a boon. Delilah, a lyrical drama, written in French, and first published in Paris, achieved for this darling of Minerva a reputation which no man is entitled to expect during his lifetime. Within twelve months of the date of publication it had appeared in almost every civilised language, and had been staged in New York, where it created a furore. Of Madame Caligula, a novel, which followed it, thirty-one editions were subscribed in six days!

The miracle of Paul Mario’s success was perhaps to be explained by the neutrality of his genius. A passionate, elemental sympathy with all nature, a seeming capacity to hear the language of the flowers, the voices of the stars and to love and understand the lowliest things that God has made, bore him straight to the heart of England as surely as it swept his name into the holy of holies of artistic France, spoke to Russia’s sombre soul and temporarily revolutionised the literature of the United States. His work belonged to no “school,” and its charm was not due to “style”; therefore his books lost little in translation, for true genius speaks to every man in his own tongue.