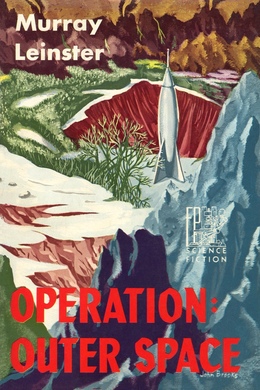 A terrifying darkness engulfed the sky while on the horizon a fire flood consumed the mountain! The ship swayed again. Flying creatures darted back and forth above the tree tops. Miles away, insensate violence reigned. Clouds of dust and smoke shot miles into the air, half a mountainside glowed white hot, and there was the sound of long-continued thunder as the ground shook and quivered… The runaway sapcecraft’s rockets bellowed as it lifter. Hovering for an instant, it surged skyward. The ship vanished into emptiness. Jed Cochrane stared helplessly at the spot where it had stood. Babs gasped suddenly. She realized the situation in which she and Cochrane had been left. Shivering, she pressed close to him as the distant trail of blackened smoke spread toward the center of the sky. They were alone together among the stars!

Jed Cochrane tried to be cynical as the helicab hummed softly through the night over the city. The cab flew at two thousand feet, where lighted buildings seemed to soar toward it from the canyons which were streets. There were lights and people everywhere, and Cochrane sardonically reminded himself that he was no better than anybody else, only he’d been trying to keep from realizing it. He looked down at the trees and shrubbery on the roof-tops, and at a dance that was going on atop one of the tallest buildings. All roofs were recreation-spaces nowadays. They were the only spaces available. When you looked down at a city like this, you had cynical thoughts. Fourteen million people in this city. Ten million in that. Eight in another and ten in another still, and twelve million in yet another … Big cities. Swarming millions of people, all desperately anxious–so Cochrane realized bitterly–all desperately anxious about their jobs and keeping them.

“Even as me and I,” said Cochrane harshly to himself. “Sure! I’m shaking in my shoes right along with the rest of them!”

But it hurt to realize that he’d been kidding himself. He’d thought he was important. Important, at least, to the advertising firm of Kursten, Kasten, Hopkins and Fallowe. But right now he was on the way–like a common legman–to take the moon-rocket to Lunar City, and he’d been informed of it just thirty minutes ago. Then he’d been told casually to get to the rocket-port right away. His secretary and two technical men and a writer were taking the same rocket. He’d get his instructions from Dr. William Holden on the way.

A part of his mind said indignantly, “Wait till I get Hopkins on the phone! It was a mixup! He wouldn’t send me off anywhere with the Dikkipatti Hour depending on me! He’s not that crazy!” But he was on his way to the space-port, regardless. He’d raged when the message reached him. He’d insisted that he had to talk to Hopkins in person before he obeyed any such instructions. But he was on his way to the space-port. He was riding in a helicab, and he was making adjustments in his own mind to the humiliation he unconsciously foresaw. There were really three levels of thought in his mind. One had adopted a defensive cynicism, and one desperately insisted that he couldn’t be as unimportant as his instructions implied, and the third watched the other two as the helicab flew with cushioned booming noises over the dark canyons of the city and the innumerable lonely lights of the rooftops.

There was a thin roaring sound, high aloft. Cochrane jerked his head back. The stars filled all the firmament, but he knew what to look for. He stared upward.

One of the stars grew brighter. He didn’t know when he first picked it out, but he knew when he’d found it. He fixed his eyes on it. It was a very white star, and for a space of minutes it seemed in no wise different from its fellows. But it grew brighter. Presently it was very bright. It was brighter than Sirius. In seconds more it was brighter than Venus. It increased more and more rapidly in its brilliance. It became the brightest object in all the heavens except the crescent moon, and the cold intensity of its light was greater than any part of that. Then Cochrane could see that this star was not quite round. He could detect the quarter-mile-long flame of the rocket-blast.

It came down with a rush. He saw the vertical, stabbing pencil of light plunge earthward. It slowed remarkably as it plunged, with all the flying aircraft above the city harshly lighted by its glare. The space-port itself showed clearly. Cochrane saw the buildings, and the other moon-rockets waiting to take off in half an hour or less.

The white flame hit the ground and splashed. It spread out in a wide flat disk of intolerable brightness. The sleek hull of the ship which still rode the flame down glinted vividly as it settled into the inferno of its own making.

Then the light went out. The glare cut off abruptly. There was only a dim redness where the space-port tarmac had been made incandescent for a little while. That glow faded–and Cochrane became aware of the enormous stillness. He had not really noticed the rocket’s deafening roar until it ended.

The helicab flew onward almost silently, with only the throbbing pulses of its overhead vanes making any sound at all.

“I kidded myself about those rockets, too,” said Cochrane bitterly to himself. “I thought getting to the moon meant starting to the stars. New worlds to live on. I had a lot more fun before I found out the facts of life!”