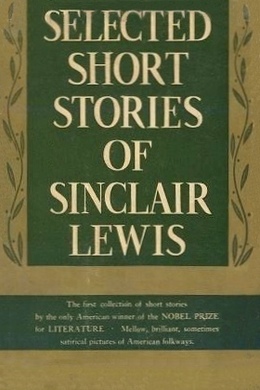 Amidst Sinclair Lewis s many remarkable novels are more than a hundred short stories which he wrote over forty-four years. Selected Short Stories contains those selected by Lewis himself and illustrates the wide range of his art and interest: tales of romantic fantasy or escape, melodramas of heroic or mock-heroic adventure, boy-meets-girl stories, satires of pretension and folly, and tales of isolation and loneliness. Lewis often played variations on themes more fully developed in his novels. Described by E.M. Forster: What Mr. Lewis has done for myself and thousands of others is to lodge a piece of a continent in our imagination.

In front of the Y Wurry Gas & Fixit Station, at Mechanicville, New York, the proprietor, Mr. Rabbit Tait, sat elegantly upon a kitchen chair. He was a figure, that Rabbit Tait–christened Thomas. His trousers might be spotty, and their hem resembled the jagged edges of magnified razor blades shown in the advertisements, but his shirt was purple, with narrow red stripes, his sleeve garters were of silvered metal, and on one sausage-like forefinger was a ring with a ruby which would have been worth two hundred thousand dollars had it not been made of glass.

Mr. Tait was not tall, but he was comfortably round; his face was flushed; his red mustache was so beautifully curled that he resembled a detective; and his sandy hair was roached down over his forehead in one of the most elegant locks ever seen on the wrong side of a mahogany bar.

Out from the neat white cottage behind the filling station, a residence with all modern conveniences except bathrooms, gas and electricity, charged his spouse, Mrs. Bessie Tait, herding their son Terry.

Now Bessie was not beautiful. She had a hard-boiled-egg forehead and a flatiron jaw, which harmonized with her milk-can voice to compose a domestic symphony. Nor was Rabbit Tait, for all his dashing air, an Apollo. But Terry, aged six, was a freak of beauty.

He was too good to be true. He had, surely, come off a magazine cover. He had golden hair, like blown thistledown in a sunset, his skin was white silk, his big eyes violet, his nose straight, and his mouth had twisting little smiles which caused the most loyal drunkards to go home and reform.

How he had ever happened to Rabbit and Bessie Tait, how the angels (or the stork, or Doc McQueech) had ever happened to leave Terry in the cottage behind the Y Wurry Filling Station instead of in the baronial clapboard castle of the Mechanicville banker, is a mystery which is left to the eugenists.

Bessie was speaking in a manner not befitting the mother of a Christmas-card cherub:

“For the love of Mike, Rabbit, are you going to sit there on your chair all afternoon? Why don’t you get busy?”

“Yeah?” contributed the cherub’s father. “Sure! Whajjuh wamme do? Go out and grab some bozo’s bus by the radiator cap and make him come in and buy some gas?”

“Well, you kin fix the screen door, can’t you?”

“The screen door? Is it busted?”

“Oh, heck, no; it ain’t busted! I just want you to come and scratch its back where the mosquitoes been biting it, you poor sap! And then you can take care of this brat. Under my feet the whole dog-gone day!”

She slapped Terry, generously and skilfully, and as Terry howled, Rabbit rose uneasily, pale behind the bronze splendor of his curled mustache. Bessie was obviously in one of her more powerful moods, and it is to be feared that we should have had the distressing spectacle of Mr. Tait going to work, driven by his good lady’s iron jaw and granite will, had not, that second, a limousine stopped at the filling station.

In the limousine was a lady so rich, so rich and old, that she had to be virtuous. She had white hair and a complexion like an old china cup. Glancing out while Rabbit Tait cheerily turned the handle of the gas pump, she saw Terry.

“Oh!” she squealed. “What an angelic child! Is it yours?”

“Yes, ma’am,” chuckled Rabbit, while Bessie ranged forward, beaming on the treasure she had so recently slapped.

“He ought to be a choir boy,” said the refined old lady. “He would be simply darling, at St. Juke’s, in Albany. You must take him there, and introduce him to Doctor Wimple, the curate–he’s so fond of the little ones! I’m sure your dear little boy could be sent to some church school free, and THINK–these dreadful modern days– otherwise, with his beauty, he might get drawn into the movies as a child star, or some frightful thing like that, and be ruined! Good morning!”

“Jiminy, that’s a swell old dame!” observed the dear little boy as the limousine swam away.

Bessie absently slapped him, and mused, “Say, Rabbit, the old lettuce gimme a good idea. The kid might do good in the movies.”

“Say, he might, at that. Gee, maybe he could make a hundred bucks a week. I’ve heard some of these kids do. Golly, I’d like to have a cane with a silver dog’s-head top!”

“Tom Tait, you get on your coat, and as soon as I scrub the kid’s mug and change his clothes, you take him right straight down to the Main Street Foto Shoppe–I’ll mind the pump–and you get some pictures of him and we’ll shoot ‘em out to Hollywood.”

“Oh, you gimme a big fat pain–hot day like this,” sighed Mr. Tait and, gloomily, “Besides, I might miss a job changing an inner tube. Just like you–throw away fifty cents on a fool chance that we might be able to farm the brat out at maybe fifty bucks a week some day, MAYBE!”