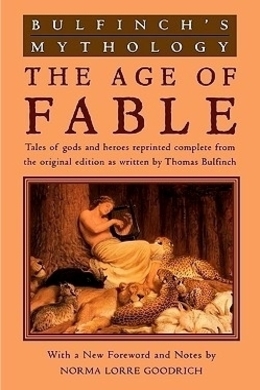 The Age of Fable

Stories of Gods and Heroes

Bulfinch’s Mythology has introduced generations of readers to the great myths of Greece and Rome, as well as time-honored legends of Norse mythology, medieval, and chivalric tales, Oriental fables, and more. The skill with which he wove various versions of a tale into a coherent whole, the vigor of his storytelling, and his abundant cross-references to poetry and painting, demonstrating the relationship of literature and art. The myths and legends so vividly retold in this volume underlie much of the art, literature, and culture of Western civilization. As Bulfinch put it, “Without a knowledge of mythology, much of the elegant literature of our own language cannot be understood and appreciated.”

The religions of ancient Greece and Rome are extinct. The so- called divinities of Olympus have not a single worshipper among living men. They belong now not to the department of theology, but to those of literature and taste. There they still hold their place, and will continue to hold it, for they are too closely connected with the finest productions of poetry and art, both ancient and modern, to pass into oblivion.

We propose to tell the stories relating to them which have come down to us from the ancients, and which are alluded to by modern poets, essayists, and orators. Our readers may thus at the same time be entertained by the most charming fictions which fancy has ever created, and put in possession of information indispensable to every one who would read with intelligence the elegant literature of his own day.

In order to understand these stories, it will be necessary to acquaint ourselves with the ideas of the structure of the universe which prevailed among the Greeks–the people from whom the Romans, and other nations through them, received their science and religion.

The Greeks believed the earth to be flat and circular, their own country occupying the middle of it, the central point being either Mount Olympus, the abode of the gods, or Delphi, so famous for its oracle.

The circular disk of the earth was crossed from west to east and divided into two equal parts by the Sea, as they called the Mediterranean, and its continuation the Euxine, the only seas with which they were acquainted.

Around the earth flowed the River Ocean, its course being from south to north on the western side of the earth, and in a contrary direction on the eastern side. It flowed in a steady, equable current, unvexed by storm or tempest. The sea, and all the rivers on earth, received their waters from it.

The northern portion of the earth was supposed to be inhabited by a happy race named the Hyperboreans, dwelling in everlasting bliss and spring beyond the lofty mountains whose caverns were supposed to send forth the piercing blasts of the north wind, which chilled the people of Hellas (Greece). Their country was inaccessible by land or sea. They lived exempt from disease or old age, from toils and warfare. Moore has given us the “Song of a Hyperborean,” beginning

On the south side of the earth, close to the stream of Ocean, dwelt a people happy and virtuous as the Hyperboreans. They were named the Aethiopians. The gods favored them so highly that they were wont to leave at times their Olympian abodes and go to share their sacrifices and banquets.

On the western margin of the earth, by the stream of Ocean, lay a happy place named the Elysian Plain, whither mortals favored by the gods were transported without tasting of death, to enjoy an immortality of bliss. This happy region was also called the “Fortunate Fields,” and the “Isles of the Blessed.”

We thus see that the Greeks of the early ages knew little of any real people except those to the east and south of their own country, or near the coast of the Mediterranean. Their imagination meantime peopled the western portion of this sea with giants, monsters, and enchantresses; while they placed around the disk of the earth, which they probably regarded as of no great width, nations enjoying the peculiar favor of the gods, and blessed with happiness and longevity.

The Dawn, the Sun, and the Moon were supposed to rise out of the Ocean, on the eastern side, and to drive through the air, giving light to gods and men. The stars, also, except those forming the Wain or Bear, and others near them, rose out of and sank into the stream of Ocean. There the sun-god embarked in a winged boat, which conveyed him round by the northern part of the earth, back to his place of rising in the east. Milton alludes to this in his “Comus”: