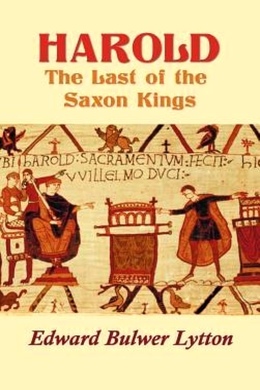 Harold: Last of the Saxons

A fascinating fictionalised biography of the life of Harold Godwinson, the last Anglo-Saxon King of England, defeated by William the Conqueror at the Battle of Hastings. This interesting novel is a strange mix of romanticism and research, featuring both witchcraft and scholarly footnotes.

Merry was the month of May in the year of our Lord 1052. Few were the boys, and few the lasses, who overslept themselves on the first of that buxom month. Long ere the dawn, the crowds had sought mead and woodland, to cut poles and wreathe flowers. Many a mead then lay fair and green beyond the village of Charing, and behind the isle of Thorney, (amidst the brakes and briars of which were then rising fast and fair the Hall and Abbey of Westminster;) many a wood lay dark in the starlight, along the higher ground that sloped from the dank Strand, with its numerous canals or dykes;–and on either side of the great road into Kent:–flutes and horns sounded far and near through the green places, and laughter and song, and the crash of breaking boughs.

As the dawn came grey up the east, arch and blooming faces bowed down to bathe in the May dew. Patient oxen stood dozing by the hedge-rows, all fragrant with blossoms, till the gay spoilers of the May came forth from the woods with lusty poles, followed by girls with laps full of flowers, which they had caught asleep. The poles were pranked with nosegays, and a chaplet was hung round the horns of every ox. Then towards daybreak, the processions streamed back into the city, through all its gates; boys with their May-gads (peeled willow wands twined with cowslips) going before; and clear through the lively din of the horns and flutes, and amidst the moving grove of branches, choral voices, singing some early Saxon stave, precursor of the later song–

Often in the good old days before the Monk-king reigned, kings and ealdermen had thus gone forth a-maying; but these merriments, savouring of heathenesse, that good prince misliked: nevertheless the song was as blithe, and the boughs were as green, as if king and ealderman had walked in the train.

On the great Kent road, the fairest meads for the cowslip, and the greenest woods for the bough, surrounded a large building that once had belonged to some voluptuous Roman, now all defaced and despoiled; but the boys and the lasses shunned those demesnes; and even in their mirth, as they passed homeward along the road, and saw near the ruined walls, and timbered outbuildings, grey Druid stones (that spoke of an age before either Saxon or Roman invader) gleaming through the dawn–the song was hushed–the very youngest crossed themselves; and the elder, in solemn whispers, suggested the precaution of changing the song into a psalm. For in that old building dwelt Hilda, of famous and dark repute; Hilda, who, despite all law and canon, was still believed to practise the dismal arts of the Wicca and Morthwyrtha (the witch and worshipper of the dead). But once out of sight of those fearful precincts, the psalm was forgotten, and again broke, loud, clear, and silvery, the joyous chorus.

So, entering London about sunrise, doors and windows were duly wreathed with garlands; and every village in the suburbs had its May-pole, which stood in its place all the year. On that happy day labour rested; ceorl and theowe had alike a holiday to dance, and tumble round the May-pole; and thus, on the first of May–Youth, and Mirth, and Music, “brought the summer home.”

The next day you might still see where the buxom bands had been; you might track their way by fallen flowers, and green leaves, and the deep ruts made by oxen (yoked often in teams from twenty to forty, in the wains that carried home the poles); and fair and frequent throughout the land, from any eminence, you might behold the hamlet swards still crowned with the May trees, and air still seemed fragrant with their garlands.

It is on that second day of May, 1052, that my story opens, at the House of Hilda, the reputed Morthwyrtha. It stood upon a gentle and verdant height; and, even through all the barbarous mutilation it had undergone from barbarian hands, enough was left strikingly to contrast the ordinary abodes of the Saxon.

The remains of Roman art were indeed still numerous throughout England, but it happened rarely that the Saxon had chosen his home amidst the villas of those noble and primal conquerors. Our first forefathers were more inclined to destroy than to adapt.

By what chance this building became an exception to the ordinary rule, it is now impossible to conjecture, but from a very remote period it had sheltered successive races of Teuton lords.