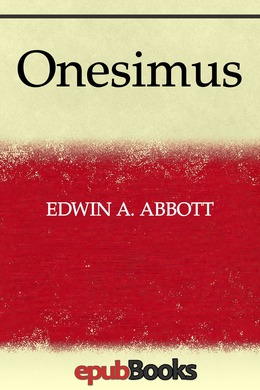 Memoirs of a Disciple of St. Paul

by Edwin A. Abbott

This historical novel is told from the point of view of first-century Christian Onesimus, a slave mentioned in the book of Philemon. Enter the mind of one of the most unusual scholars of the late Victorian era, whose interests ranged from the Four Gospels to the fourth dimension. Abbott wrote many books of New Testament scholarship and a collection of textbooks, but he is most famous for Flatland, an odyssey into the world of higher mathematics.

In the last year of the Emperor Tiberius I and my twin-brother Chrestus were found lying in one cradle, exposed with a great number of other babes upon the steps of the temple of Asclepius, in Pergamus, a city of Bithynia. Sign or token of our parents, whether they were free-born or slave, there was none; but only a little silver seal hung round my neck, and on the seal these words in Greek characters, I LOVE THEE, and on my brother Chrestus another of the same fashion, bearing the inscription, TRUST ME. Many a time during the days of my wandering have I spoken reproachfully in my heart, saying that our parents gave us small cause for trust, and that it was poor love to send out into the rough world two innocent babes with no other equipment against evil than these slight toys. But the hand of the Lord was in it, to turn this evil into good in the end.

Ammiane the wife of Menneas was the name of our new mother. Her own son Ammias was but lately dead; and that which drew her kind heart to us more than to any other among so large a multitude of poor babes there pitifully lying on the temple steps, was that in my brother Chrestus she seemed to discern a likeness to her lost one.

Menneas took us, together with Ammiane, to his house in Lystra, a city of Lycaonia, where was the better part of his estate; and soon afterwards he died. But his widow, the good Ammiane, to whom old Menneas had left all his possessions, treated us as if we had been her own children, and taught us to call her mother; and we had no thought but she was our mother indeed. Yet as there had been no formal adoption of us according to law, we were still in the eyes of the law not free, but slaves; for so runs the law, that whosoever is exposed as a child and saved and reared, becomes the slave of them that rear him. For our enfranchisement had been first delayed, and then forgotten in the sickness and death of Menneas; and by that time we were so established in the household that none questioned but we had been enfranchised, and all thought of it was laid aside. Therefore according to the law we were still Ammiane’s slaves, and not her sons, and in danger to be sold whenever our dear foster- mother might die. But of all this neither I nor my brother Chrestus knew anything; but we rejoiced in the love of her whom we called mother; and all the household loved us for her sake, and some for our own. And so the days rolled on in happiness till I had come to my tenth year.

It was in the spring, as I remember, of the fifth year of the emperor Claudius that I first saw the Holy Apostle, whom I saw not again till many years had passed away; and though I was at that time but a child of ten years or thereabouts, yet every circumstance of it is imprinted upon my memory. It was the cool of the evening, and I was without the wall, hard by the Iconian gate, on one of the smaller hills that look down upon the town, a little to the north of the Iconian road. Hermas, our herdsman, was playing upon his pipe some song to the god Pan, and the goats were gambolling around him. But I—being wholly taken up with teaching a little kid to dance to the sound of the music—paid no heed to the chidings of our nurse Trophime, who would have had me go back with her to the city because it was now near sun-down. So lifting up her eyes and seeing some dromedaries and a dust on the Iconian road, “Look, dear child,” said she, “yonder come merchants from Iconium; if therefore thou wilt go with me without delay, thou wilt see their stores of pretty things, and perchance Ammiane will buy thee somewhat.”

Hearing this, I willingly ran down with her to the city gate; and arriving thither before the travellers, I waited till they should enter. But when they were now nigh, I perceived that they were no merchants, and I would have turned away. Yet I did not, for somewhat in the face of one of the travellers held me fast, I know not how, so that I fixed my gaze on him perforce, even as a bird fascinated by a serpent; and indeed I thought myself to be bewitched and spat thrice; but yet I stood still gazing upon him. At that time he was not yet bald, he had a clear complexion, a nose hooked and somewhat large; he was short of stature, and as he walked he bent his head a little forward, as if not able to discern things clearly; his eyebrows were shaggy and met together; but what most moved me was the glance of his eyes which were of a penetrating brightness, as though they would pierce through the outside of things even to the innermost substance.