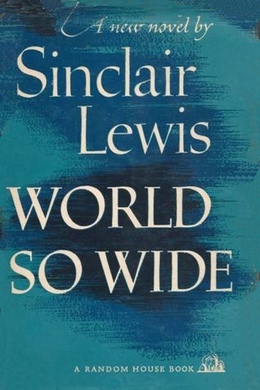 The story of a young, recently widowed ex-Army major and architect, Hayden Chart. He strives mightily to find personal meaning in Florence. Beautiful fellow American Dr Olivia Lomond is a budding scholar who tempts him to make his mind grow in appreciation of art and history. But earthy, honest Roxanna Eldritch,home town girl and reporter sent to Europe to cover the 1950 Holy Year in Rome, improbably wins Chart’s heart in the end.

The traffic policemen and the two detectives from the homicide squad examined the tracks of the car and were convinced that a soft shoulder of the road had given way.

They had been returning from Bison Park, after midnight but quite sober. Hayden Chart was driving the convertible and hating his wife, Caprice, and hating himself for hating her. He was not given to grudges and, despite her glitter of pale-green dinner dress and her glitter of derisive gossip, Caprice was a simpleton who no more deserved hatred than did a noisy child. But she did chatter so. It wore Hayden down like a telephone bell ringing incessantly in an empty house.

She gabbled, “Jesse Bradbin is so dumb! He’s an absolute hick, and he’s about as much of an architect as my left foot. Why couldn’t you get a smarter partner? And IS he a lousy bridge player! Is he ever!”

“No, it’s his cluck of a wife that really gets me down. In my candid opinion, Mary Eliza Bradbin is the worst dose of vinegar in Newlife; the most hypocritical combination of piousness and secret drinking I ever ran into. And always criticizing some poor bunny. You pretend like you like everybody, but even you got to admit Mary Eliza is a pain in the neck. Isn’t she, huh? Isn’t she?”

“She means poison, that’s what she means!”

The scolding did not become Caprice, thought Hayden. She was elfin, tiny and quick and rose and pale gold, given to affectionate giggles in between her miaows. If she would only shut up, he sighed, he could go on loving her like a dutiful husband–perhaps.

He longed for silence. Especially on a moony night like this, driving on smooth cement with this suave engine, he liked to look up at the mountains against the moon-pale sky, to look with satisfaction at the houses he himself had planned in these comely new suburbs of Newlife, “the fastest-growing city in Colorado”– Newlife, with its skyscrapers set among flat one-story supply- houses for silver miners and sheep-ranchers; Newlife and its symphony orchestra, with a Spanish conductor, playing in a Renaissance temple where a fiery dance-hall had stood but twenty years before. Newlife had swollen from 30,000 to 300,000 in thirty years, and it expected a million in another thirty.

And in Newlife no firm was more enterprising than Chart, Bradbin & Chart, architects: the heavy-handed Jesse Bradbin, aged sixty, and the thirty-five-year-old Hayden, who was slim and compact and patient, and given to playing tennis and reading biography.

He did not know Caprice. It would always be his fault with women that his imagination darted into their inner minds, thought with and through their minds. He took their side even against himself, and saw to it, thus, that he invariably lost in the war against women.

He could not even be thunderous with a woman client guilty of the most sickening of crimes (except for not paying the bill): wanting what she wanted in a house and not what the architect knew was good for her. He was both maddened and sympathetic now when Caprice, exasperated at not having made him pay more attention to her, started all her little tricks of propaganda, which mutely shrieked, “Notice me–notice me!”

She was capable of doing this over and over until he testified to her powers of torture by scolding her.

But tonight his anger at her petty bullying was lost in pity that, at slightly over thirty, she should still have the mind of a child delighted by any sort of gift. He made himself say to her, civilly, “That’s a nice jade charm. I’m glad you won it.”

Now that she had made him recognize her presence, she returned to her gabbing, but more spitefully; she did what she gleefully called “needling him a little.”

“But you, big boy, were YOU ever terrible tonight! You played worse than Mary Eliza. You got no more card sense than a zebra. But what amused me, when it didn’t get me sore–oh, you didn’t think I noticed; you think you’re such a smoothie about covering up your sniffing around after women–what had me sunk was the way you kept sneaking in a look at Roxanna’s ankles and Alice’s buz-ZOOM and Jane’s god-awful lipstick. You’d be THE most ridiculous tail- waving cat out on the tiles, if it wasn’t that you’re such a coward!”