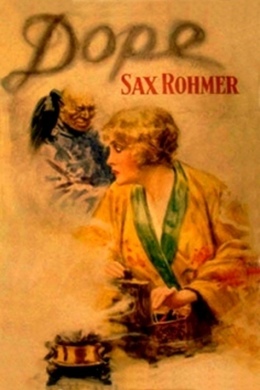 A Story of Chinatown and the Drug Traffic

Do you know the kind of life the drug fiend lives? Have you ever imagined what it must be like to be a slave to Chandu – the days of fierce craving, the ecstatic moment of fantastic dreams and exaltation and afterward the black despair which only more drugs can relieve? Sax Rohmer paints an unforgettable picture of this life in his story, which is based upon actual conditions as they existed in London.

Monte Irvin, alderman of the city and prospective Lord Mayor of London, paced restlessly from end to end of the well-appointed library of his house in Prince’s Gate. Between his teeth he gripped the stump of a burnt-out cigar. A tiny spaniel lay beside the fire, his beady black eyes following the nervous movements of the master of the house.

At the age of forty-five Monte Irvin was not ill-looking, and, indeed, was sometimes spoken of as handsome. His figure was full without being corpulent; his well-groomed black hair and moustache and fresh if rather coarse complexion, together with the dignity of his upright carriage, lent him something of a military air. This he assiduously cultivated as befitting an ex-Territorial officer, although as he had seen no active service he modestly refrained from using any title of rank.

Some quality in his brilliant smile, an oriental expressiveness of the dark eyes beneath their drooping lids, hinted a Semitic strain; but it was otherwise not marked in his appearance, which was free from vulgarity, whilst essentially that of a successful man of affairs.

In fact, Monte Irvin had made a success of every affair in life with the lamentable exception of his marriage. Of late his forehead had grown lined, and those business friends who had known him for a man of abstemious habits had observed in the City chophouse at which he lunched almost daily that whereas formerly he had been a noted trencherman, he now ate little but drank much.

Suddenly the spaniel leapt up with that feverish, spider-like activity of the toy species and began to bark.

Monte Irvin paused in his restless patrol and listened.

The spaniel ran to the door, sniffing eagerly. A muffled sound of voices became audible, and Irvin, following a moment of hesitation, crossed and opened the door. The dog ran out, yapping in his irritating staccato fashion, and an expression of hope faded from Irvin’s face as he saw a tall fair girl standing in the hallway talking to Hinkes, the butler. She wore soiled Burberry, high-legged tan boots, and a peaked cap of distinctly military appearance. Irvin would have retired again, but the girl glanced up and saw him where he stood by the library door. He summoned up a smile and advanced.

“Good evening, Miss Halley,” he said, striving to speak genially–for of all of his wife’s friends he liked Margaret Halley the best. “Were you expecting to find Rita at home?”

The girl’s expression was vaguely troubled. She had the clear complexion and bright eyes of perfect health, but to-night her eyes seemed over-bright, whilst her face was slightly pale.

“I am afraid I cannot tell you when she is likely to return. But please come in, and I will make inquiries.”

“Oh, no, I would rather you did not trouble and I won’t stay, thank you nevertheless. I expect she will ring me up when she comes in.”

“Is there any message I can give her?”

“Well”–she hesitated for an instant–“you might tell her, if you would, that I only returned home at eight o’clock, so that I could not come around any earlier.” She glanced rapidly at Irvin, biting her lip. “I wish I could have seen her,” she added in a low voice.

“She wishes to see you particularly?”

“Yes. She left a note this afternoon.” Again she glanced at him in a troubled way. “Well, I suppose it cannot be helped,” she added and smilingly extended her hand. “Good night, Mr. Irvin. Don’t bother to come to the door.”

But Irvin passed Hinkes and walked out under the porch with Margaret Halley. Humid yellow mist floated past the street lamps, and seemed to have gathered in a moving reef around the little runabout car which was standing outside the house, its motor chattering tremulously.

“It’s a brute isn’t it?” said the girl laughingly, and turned on the steps so that the light shining out of the hallway gleamed on her white teeth and upraised eyes. She was pulling on big, ugly, furred gloves, and Monte Irvin mentally contrasted her fresh, athletic type of beauty with the delicate, exotic charm of his wife.

She opened the door of the little car, got in and drove off, waving one hugely gloved hand to Irvin as he stood in the porch looking after her. When the red tail-light had vanished in the mist he returned to the house and re-entered the library. If only all his wife’s friends were like Margaret Halley, he mused, he might have been spared the insupportable misgivings which were goading him to madness. His mind filled with poisonous suspicions, he resumed his pacing of the library, awaiting and dreading that which should confirm his blackest theories. He was unaware of the fact that throughout the interview he had held the stump of cigar between his teeth. He held it there yet, pacing, pacing up and down the long room.