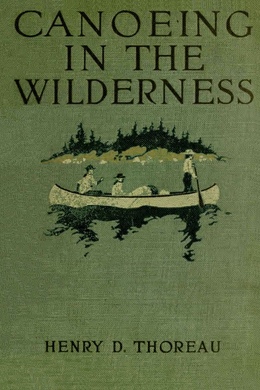 Canoeing in the Wilderness

At the time Thoreau made this wilderness canoe trip he was forty years old. The record of the journey is the latter half of his The Maine Woods, which is perhaps the finest idyl of the forest ever written. It is particularly charming in its blending of meditative and poetic fancies with the minute description of the voyager’s experiences. The chief attraction that inspired Thoreau to make the trip was the primitiveness of the region. Here was a vast tract of almost virgin woodland, peopled only with a few loggers and pioneer farmers, Indians, and wild animals. No one could have been better fitted than Thoreau to enjoy such a region and to transmit his enjoyment of it to others.

I started on my third excursion to the Maine woods Monday, July 20, 1857, with one companion, arriving at Bangor the next day at noon. The succeeding morning, a relative of mine who is well acquainted with the Penobscot Indians took me in his wagon to Oldtown to assist me in obtaining an Indian for this expedition. We were ferried across to the Indian Island in a bateau. The ferryman’s boy had the key to it, but the father, who was a blacksmith, after a little hesitation, cut the chain with a cold chisel on the rock. He told me that the Indians were nearly all gone to the seaboard and to Massachusetts, partly on account of the smallpox, of which they are very much afraid, having broken out in Oldtown. The old chief Neptune, however, was there still.

The first man we saw on the island was an Indian named Joseph Polis, whom my relative addressed familiarly as “Joe.” He was dressing a deerskin in his yard. The skin was spread over a slanting log, and he was scraping it with a stick held by both hands. He was stoutly built, perhaps a little above the middle height, with a broad face, and, as others said, perfect Indian features and complexion. His house was a two-story white one with blinds, the best-looking that I noticed there, and as good as an average one on a New England village street. It was surrounded by a garden and fruit trees, single cornstalks standing thinly amid the beans. We asked him if he knew any good Indian who would like to go into the woods with us, that is, to the Allegash Lakes by way of Moosehead, and return by the East Branch of the Penobscot.

To which he answered out of that strange remoteness in which the Indian ever dwells to the white man, “Me like to go myself; me want to get some moose”; and kept on scraping the skin.

The ferryman had told us that all the best Indians were gone except Polis, who was one of the aristocracy. He, to be sure, would be the best man we could have, but if he went at all would want a great price. Polis asked at first two dollars a day but agreed to go for a dollar and a half, and fifty cents a week for his canoe. He would come to Bangor with his canoe by the seven o’clock train that evening–we might depend on him. We thought ourselves lucky to secure the services of this man, who was known to be particularly steady and trustworthy.

I spent the afternoon with my companion, who had remained in Bangor, in preparing for our expedition, purchasing provisions, hard-bread, pork, coffee, sugar, etc., and some india-rubber clothing.

At evening the Indian arrived in the cars, and I led the way, while he followed me, three quarters of a mile to my friend’s house, with the canoe on his head. I did not know the exact route, but steered by the lay of the land, as I do in Boston. I tried to enter into conversation with him, but as he was puffing under the weight of his canoe, not having the usual apparatus for carrying it, but, above all, as he was an Indian, I might as well have been thumping on the bottom of his birch the while. In answer to the various observations that I made he only grunted vaguely from beneath his canoe once or twice, so that I knew he was there.

Early the next morning the stage called for us. My companion and I had each a large knapsack as full as it would hold, and we had two large rubber bags which held our provisions and utensils. As for the Indian, all the baggage he had, beside his axe and gun, was a blanket, which he brought loose in his hand. However, he had laid in a store of tobacco and a new pipe for the excursion. The canoe was securely lashed diagonally across the top of the stage, with bits of carpet tucked under the edge to prevent its chafing. The driver appeared as much accustomed to carrying canoes in this way as bandboxes.

At the Bangor House we took in four men bound on a hunting excursion, one of the men going as cook. They had a dog, a middling-sized brindled cur, which ran by the side of the stage, his master showing his head and whistling from time to time. But after we had gone about three miles the dog was suddenly missing, and two of the party went back for him, while the stage, which was full of passengers, waited. At length one man came back, while the other kept on. This whole party of hunters declared their intention to stop till the dog was found, but the very obliging driver was ready to wait a spell longer. He was evidently unwilling to lose so many passengers, who would have taken a private conveyance, or perhaps the other line of stages, the next day. Such progress did we make, with a journey of over sixty miles to be accomplished that day, and a rainstorm just setting in. We discussed the subject of dogs and their instincts till it was threadbare, while we waited there, and the scenery of the suburbs of Bangor is still distinctly impressed on my memory.