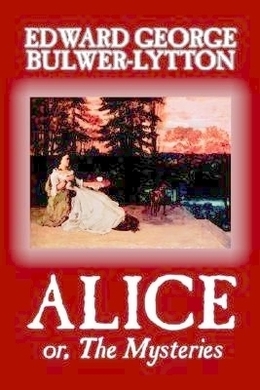 This is another outstanding occult, Rosicrucian, novel that emphasizes one of Lytton’s famous esoteric principles-vibration A sequel to the disenchanted recluse poet Ernest Maltravers. Although Alice is by far more action-driven than its predecessor, there are still some wonderful reflective passages. After Florence Lascelles’s death, Ernest has withdrawn from the world, everything seems to go well with Lumley, who has inherited the title of Lord Vargrave and started a political career…

It was towards the evening of a day in early April that two ladies were seated by the open windows of a cottage in Devonshire. The lawn before them was gay with evergreens, relieved by the first few flowers and fresh turf of the reviving spring; and at a distance, through an opening amongst the trees, the sea, blue and tranquil, bounded the view, and contrasted the more confined and home-like features of the scene. It was a spot remote, sequestered, shut out from the business and pleasures of the world; as such it suited the tastes and character of the owner.

That owner was the younger of the ladies seated by the window. You would scarcely have guessed, from her appearance, that she was more than seven or eight and twenty, though she exceeded by four or five years that critical boundary in the life of beauty. Her form was slight and delicate in its proportions, nor was her countenance the less lovely because, from its gentleness and repose (not unmixed with a certain sadness) the coarse and the gay might have thought it wanting in expression. For there is a stillness in the aspect of those who have felt deeply, which deceives the common eye,–as rivers are often alike tranquil and profound, in proportion as they are remote from the springs which agitated and swelled the commencement of their course, and by which their waters are still, though invisibly, supplied.

The elder lady, the guest of her companion, was past seventy; her gray hair was drawn back from the forehead, and gathered under a stiff cap of quaker-like simplicity; while her dress, rich but plain, and of no very modern fashion, served to increase the venerable appearance of one who seemed not ashamed of years.

“My dear Mrs. Leslie,” said the lady of the house, after a thoughtful pause in the conversation that had been carried on for the last hour, “it is very true; perhaps I was to blame in coming to this place; I ought not to have been so selfish.”

“No, my dear friend,” returned Mrs. Leslie, gently; “selfish is a word that can never be applied to you; you acted as became you,–agreeably to your own instinctive sense of what is best when at your age,–independent in fortune and rank, and still so lovely,–you resigned all that would have attracted others, and devoted yourself, in retirement, to a life of quiet and unknown benevolence. You are in your sphere in this village,–humble though it be,–consoling, relieving, healing the wretched, the destitute, the infirm; and teaching your Evelyn insensibly to imitate your modest and Christian virtues.” The good old lady spoke warmly, and with tears in her eyes; her companion placed her hand in Mrs. Leslie’s.

“You cannot make me vain,” said she, with a sweet and melancholy smile. “I remember what I was when you first gave shelter to the poor, desolate wanderer and her fatherless child; and I, who was then so poor and destitute, what should I be, if I was deaf to the poverty and sorrows of others,–others, too, who are better than I am. But now Evelyn, as you say, is growing up; the time approaches when she must decide on accepting or rejecting Lord Vargrave. And yet in this village how can she compare him with others; how can she form a choice? What you say is very true; and yet I did not think of it sufficiently. What shall I do? I am only anxious, dear girl, to act so as may be best for her own happiness.”

“Of that I am sure,” returned Mrs. Leslie; “and yet I know not how to advise. On one hand, so much is due to the wishes of your late husband, in every point of view, that if Lord Vargrave be worthy of Evelyn’s esteem and affection, it would be most desirable that she should prefer him to all others. But if he be what I hear he is considered in the world,–an artful, scheming, almost heartless man, of ambitious and hard pursuits,–I tremble to think how completely the happiness of Evelyn’s whole life may be thrown away. She certainly is not in love with him, and yet I fear she is one whose nature is but too susceptible of affection. She ought now to see others,–to know her own mind, and not to be hurried, blindfold and inexperienced, into a step that decides existence. This is a duty we owe to her,–nay, even to the late Lord Vargrave, anxious as he was for the marriage. His aim was surely her happiness, and he would not have insisted upon means that time and circumstances might show to be contrary to the end he had in view.”