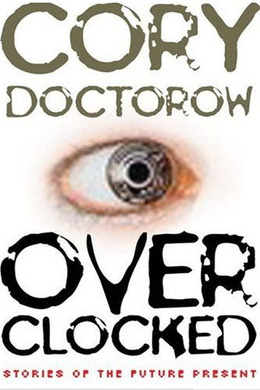 Stories of the Future Present

Have you ever wondered what it’s like to get bitten by a zombie? To live through a bioweapon attack? To have every aspect of your life governed by invisible ants? In Cory Doctorow’s collection of novellas, he wields his formidable experience in technology and computing to give us mindbending sci-fi tales that explore the possibilities of information technology — and its various uses — run amok. “Anda’s Game” is a spin on the bizarre new phenomenon of “cyber sweatshops,” in which people are paid very low wages to play online games all day in order to generate in-game wealth, which can be converted into actual money. Another tale tells of the heroic exploits of “sysadmins” — systems administrators — as they defend the cyber-world, and hence the world at large, from worms and bioweapons. And yes, there is a story about zombies, too.

The coppers smashed my father’s printer when I was eight. I remember the hot, cling-film-in-a-microwave smell of it, and Da’s look of ferocious concentration as he filled it with fresh goop, and the warm, fresh-baked feel of the objects that came out of it.

The coppers came through the door with truncheons swinging, one of them reciting the terms of the warrant through a bullhorn. One of Da’s customers had shopped him. The ipolice paid in high-grade pharmaceuticals – performance enhancers, memory supplements, metabolic boosters. The kind of thing that cost a fortune over the counter; the kind of thing you could print at home, if you didn’t mind the risk of having your kitchen filled with a sudden crush of big, beefy bodies, hard truncheons whistling through the air, smashing anyone and anything that got in the way.

They destroyed grandma’s trunk, the one she’d brought from the old country. They smashed our little refrigerator and the purifier unit over the window. My tweetybird escaped death by hiding in a corner of his cage as a big, booted foot crushed most of it into a sad tangle of printer-wire.

Da. What they did to him. When he was done, he looked like he’d been brawling with an entire rugby side. They brought him out the door and let the newsies get a good look at him as they tossed him in the car, while a spokesman told the world that my Da’s organized-crime bootlegging operation had been responsible for at least twenty million in contraband, and that my Da, the desperate villain, had resisted arrest.

I saw it all from my phone, in the remains of the sitting room, watching it on the screen and wondering how, just how anyone could look at our little flat and our terrible, manky estate and mistake it for the home of an organized crime kingpin. They took the printer away, of course, and displayed it like a trophy for the newsies. Its little shrine in the kitchenette seemed horribly empty. When I roused myself and picked up the flat and rescued my peeping poor tweetybird, I put a blender there. It was made out of printed parts, so it would only last a month before I’d need to print new bearings and other moving parts. Back then, I could take apart and reassemble anything that could be printed.

By the time I turned eighteen, they were ready to let Da out of prison. I’d visited him three times – on my tenth birthday, on his fiftieth, and when Ma died. It had been two years since I’d last seen him and he was in bad shape. A prison fight had left him with a limp, and he looked over his shoulder so often it was like he had a tic. I was embarrassed when the minicab dropped us off in front of the estate, and tried to keep my distance from this ruined, limping skeleton as we went inside and up the stairs.

“Lanie,” he said, as he sat me down. “You’re a smart girl, I know that. Trig. You wouldn’t know where your old Da could get a printer and some goop?”

I squeezed my hands into fists so tight my fingernails cut into my palms. I closed my eyes. “You’ve been in prison for ten years, Da. Ten. Years. You’re going to risk another ten years to print out more blenders and pharma, more laptops and designer hats?”

He grinned. “I’m not stupid, Lanie. I’ve learned my lesson. There’s no hat or laptop that’s worth going to jail for. I’m not going to print none of that rubbish, never again.” He had a cup of tea, and he drank it now like it was whisky, a sip and then a long, satisfied exhalation. He closed his eyes and leaned back in his chair.

“Come here, Lanie, let me whisper in your ear. Let me tell you the thing that I decided while I spent ten years in lockup. Come here and listen to your stupid Da.”

I felt a guilty pang about ticking him off. He was off his rocker, that much was clear. God knew what he went through in prison. “What, Da?” I said, leaning in close.

When Sysadmins Ruled the Earth

When Felix’s special phone rang at two in the morning, Kelly rolled over and punched him in the shoulder and hissed, “Why didn’t you turn that fucking thing off before bed?”

“You’re not a fucking doctor,” she said, kicking him as he sat on the bed’s edge, pulling on the pants he’d left on the floor before turning in. “You’re a goddamned systems administrator.”

He knew she was right. He answered the phone.

“Main routers not responding. BGP not responding.” The mechanical voice of the systems monitor didn’t care if he cursed at it, so he did, and it made him feel a little better.