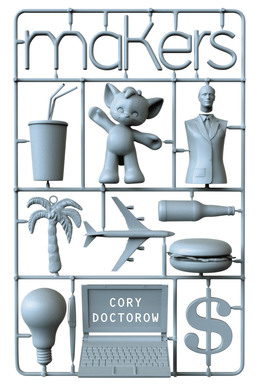 Perry and Lester invent things: seashell robots that make toast, Boogie Woogie Elmo dolls that drive cars. They also invent entirely new economic systems. When Kodak and Duracell are broken up for parts by sharp venture capitalists, Perry and Lester help to invent the “New Work,” a New Deal for the technological era. Barefoot bankers cross the nation, microinvesting in high-tech communal mini-startups. Together, they transform the nation and blogger Andrea Fleeks is there to document it. Then it slides into collapse. The New Work bust puts the dot-bomb to shame. Perry and Lester build a network of interactive rides in abandoned Walmarts across the land. As their rides gain in popularity, a rogue Disney executive engineers a savage attack on the rides by convincing the police that their 3D printers are being used to make AK-47s. Lawsuits multiply as venture capitalists take on a new investment strategy: backing litigation against companies like Disney. Lester and Perry’s friendship falls to pieces when Lester gets the fatkins treatment, which turns him into a sybaritic gigolo. Then things get really interesting.

For more information on this title, visit the Cory Doctorow website.

Suzanne Church almost never had to bother with the blue blazer these days. Back at the height of the dot-boom, she’d put on her business journalist drag – blazer, blue sailcloth shirt, khaki trousers, loafers – just about every day, putting in her obligatory appearances at splashy press-conferences for high-flying IPOs and mergers. These days, it was mostly work at home or one day a week at the San Jose Mercury News’s office, in comfortable light sweaters with loose necks and loose cotton pants that she could wear straight to yoga after shutting her computer’s lid.

Blue blazer today, and she wasn’t the only one. There was Reedy from the NYT’s Silicon Valley office, and Tribbey from the WSJ, and that despicable rat-toothed jumped-up gossip columnist from one of the UK tech-rags, and many others besides. Old home week, blue blazers fresh from the dry-cleaning bags that had guarded them since the last time the NASDAQ broke 5,000.

The man of the hour was Landon Kettlewell – the kind of outlandish prep-school name that always seemed a little made up to her – the new CEO and front for the majority owners of Kodak/Duracell. The despicable Brit had already started calling them Kodacell. Buying the company was pure Kettlewell: shrewd, weird, and ethical in a twisted way.

“Why the hell have you done this, Landon?” Kettlewell asked himself into his tie-mic. Ties and suits for the new Kodacell execs in the room, like surfers playing dress-up. “Why buy two dinosaurs and stick ‘em together? Will they mate and give birth to a new generation of less-endangered dinosaurs?”

He shook his head and walked to a different part of the stage, thumbing a PowerPoint remote that advanced his slide on the jumbotron to a picture of a couple of unhappy cartoon brontos staring desolately at an empty nest. “Probably not. But there is a good case for what we’ve just done, and with your indulgence, I’m going to lay it out for you now.”

“Let’s hope he sticks to the cartoons,” Rat-Toothed hissed beside her. His breath smelled like he’d been gargling turds. He had a not-so-secret crush on her and liked to demonstrate his alpha-maleness by making half-witticisms into her ear. “They’re about his speed.”

She twisted in her seat and pointedly hunched over her computer’s screen, to which she’d taped a thin sheet of polarized plastic that made it opaque to anyone shoulder-surfing her. Being a halfway attractive woman in Silicon Valley was more of a pain in the ass than she’d expected, back when she’d been covering rustbelt shenanigans in Detroit, back when there was an auto industry in Detroit.

The worst part was that the Brit’s reportage was just spleen-filled editorializing on the lack of ethics in the valley’s board-rooms (a favorite subject of hers, which no doubt accounted for his fellow-feeling), and it was also the crux of Kettlewell’s schtick. The spectacle of an exec who talked ethics enraged Rat-Toothed more than the vilest baby-killers. He was the kind of revolutionary who liked his firing squads arranged in a circle.

“I’m not that dumb, folks,” Kettlewell said, provoking a stagey laugh from Mr Rat-Tooth. “Here’s the thing: the market had valued these companies at less than their cash on hand. They have twenty billion in the bank and a 16 billion dollar market-cap. We just made four billion dollars, just by buying up the stock and taking control of the company. We could shut the doors, stick the money in our pockets, and retire.”

Suzanne took notes. She knew all this, but Kettlewell gave good sound-bite, and talked slow in deference to the kind of reporter who preferred a notebook to a recorder. “But we’re not gonna do that.” He hunkered down on his haunches at the edge of the stage, letting his tie dangle, staring spacily at the journalists and analysts. “Kodacell is bigger than that.” He’d read his email that morning then, and seen Rat-Toothed’s new moniker. “Kodacell has goodwill. It has infrastructure. Administrators. Physical plant. Supplier relationships. Distribution and logistics. These companies have a lot of useful plumbing and a lot of priceless reputation.

“What we don’t have is a product. There aren’t enough buyers for batteries or film – or any of the other stuff we make – to occupy or support all that infrastructure. These companies slept through the dot-boom and the dot-bust, trundling along as though none of it mattered. There are parts of these businesses that haven’t changed since the fifties.

“We’re not the only ones. Technology has challenged and killed businesses from every sector. Hell, IBM doesn’t make computers anymore! The very idea of a travel agent is inconceivably weird today! And the record labels, oy, the poor, crazy, suicidal, stupid record labels. Don’t get me started.