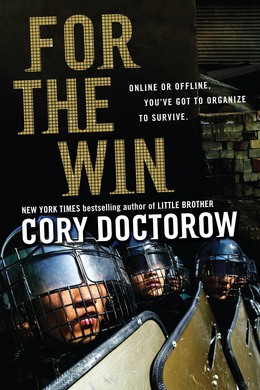 A provocative and exhilarating tale of teen rebellion against global corporations. In the virtual future, you must organize to survive. At any hour of the day or night, millions of people around the globe are engrossed in multiplayer online games, questing and battling to win virtual “gold,” jewels, and precious artifacts. Meanwhile, others seek to exploit this vast shadow economy, running electronic sweatshops in the world’s poorest countries, where countless “gold farmers,” bound to their work by abusive contracts and physical threats, harvest virtual treasure for their employers to sell to First World gamers who are willing to spend real money to skip straight to higher-level gameplay.

In the game, Matthew’s characters killed monsters, as they did every single night. But tonight, as Matthew thoughtfully chopsticked a dumpling out of the styrofoam clamshell, dipped it in the red hot sauce and popped it into his mouth, his little squadron did something extraordinary: they began to win.

There were eight monitors on his desk, arranged in two ranks of four, the top row supported on a shelf he’d bought from an old lady scrap dealer in front of the Dongmen market. She’d also sold him the monitors, shaking her head at his idiocy: at a time when everyone wanted giant, 30” screens, why did he want this collection of dinky little 9” displays?

So they’d all fit on his desk.

Not many people could play eight simultaneous games of Svartalfaheim Warriors. For one thing, Coca Cola (who owned the game), had devoted a lot of programmer time to preventing you from playing more than one game on a single PC, so you had to somehow get eight PCs onto one desk, with eight keyboards and eight mice on the desk, too, and room enough for your dumplings and an ashtray and a stack of Indian comic books and that stupid war-axe that Ping gave him and his notebooks and his sketchbook and his laptop and –

It was a crowded desk.

And it was noisy. He’d set up eight pairs of cheap speakers, each glued to the appropriate monitor, turned down low to the normal hum of Svartalfaheim – the clash of axes, the roar of ice-giants, the eldritch music of black elves (which sounded a lot like the demo programs on the electric keyboards his mother had spent half her life manufacturing). Now they were all making casino noise, pay off noises, as his raiding party began to clean up. The gold rolled into their accounts. He was playing trolls – it was trolls versus elves in Svartalfaheim, though there was an expansion module with light elves and some kind of walking tree – and he’d come through an instanced dungeon that was the underground lair of a minor dark elvish princeling. The lair was only medium hard, with a lot of crappy little monsters early on, then a bunch of dark elf cannon-fodder to be mown down, some traps, and then the level-boss, a wizard who had to be taken out by the spell-casters in Matthew’s party while the healers healed them and the tanks killed anything that tried to attack them.

So far, so good. Matthew had run and mapped the dungeon on his second night in-world, a quick reccy that showed that he could expect to do about 400 gold’s worth of business there in about 20 minutes, which made it a pretty poor way to earn a living. But Matthew kept very good notes, and among his notes was the fact that the very last set of guards had dropped some mareridtbane, which was part of the powerful Living Nightmare spell in the new expansion module. There were players all over Germany, Switzerland and Denmark who were buying mareridtbane for 800 gold per plant. His initial reccy had netted him five plants. That brought the total expected take from the dungeon up to 4,400 gold for 20 minutes, or 13,200 gold per hour – which, at the day’s exchange, was worth about $30, or 285 Renminbi.

Which was – he thought for a second – more than 71 bowls of dumplings.