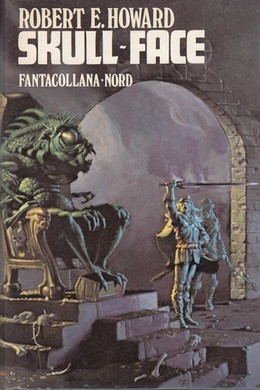 Boxer Steve Costigan drearily waking in Yu Shantu’s Temple of Dreams, a hashish den in the city of London, England. He has been re-occurring dreams of something he calls “Skull Face”, and is puzzled about their meanings. He is broke, and in need of more hashish, the drug he is addicted to. When confronted by the doorman, Hassim, Costigan informs him of his lack of funds. Hassim promptly throws him out through the front door to the den. Bruised and bleeding, Costigan is helped to his feet by a young woman, Zulieka.

The horror first took concrete form amid that most unconcrete of all things–a hashish dream. I was off on a timeless, spaceless journey through the strange lands that belong to this state of being, a million miles away from earth and all things earthly; yet I became cognizant that something was reaching across the unknown voids– something that tore ruthlessly at the separating curtains of my illusions and intruded itself into my visions.

I did not exactly return to ordinary waking life, yet I was conscious of a seeing and a recognizing that was unpleasant and seemed out of keeping with the dream I was at that time enjoying. To one who has never known the delights of hashish, my explanation must seem chaotic and impossible. Still, I was aware of a rending of mists and then the Face intruded itself into my sight. I though at first it was merely a skull; then I saw that it was a hideous yellow instead of white, and was endowed with some horrid form of life. Eyes glimmered deep in the sockets and the jaws moved as if in speech. The body, except for the high, thin shoulders, was vague and indistinct, but the hands, which floated in the mists before and below the skull, were horribly vivid and filled me with crawling fears. They were like the hands of a mummy, long, lean and yellow, with knobby joints and cruel curving talons.

Then, to complete the vague horror which was swiftly taking possession of me, a voice spoke–imagine a man so long dead that his vocal organ had grown rusty and unaccustomed to speech. This was the thought which struck me and made my flesh crawl as I listened.

“A strong brute and one who might be useful somehow. See that he is given all the hashish he requires.”

Then the face began to recede, even as I sensed that I was the subject of conversation, and the mists billowed and began to close again. Yet for a single instant a scene stood out with startling clarity. I gasped–or sought to. For over the high, strange shoulder of the apparition another face stood out clearly for an instant, as if the owner peered at me. Red lips, half-parted, long dark eyelashes, shading vivid eyes, a shimmery cloud of hair. Over the shoulder of Horror, breathtaking beauty for an instant looked at me.

My dream of the skull-face was borne over that usually uncrossable gap that lies between hashish enchantment and humdrum reality. I sat cross-legged on a mat in Yun Shatu’s Temple of Dreams and gathered the fading forces of my decaying brain to the task of remembering events and faces.

This last dream was so entirely different from any I had ever had before, that my waning interest was roused to the point of inquiring as to its origin. When I first began to experiment with hashish, I sought to find a physical or psychic basis for the wild flights of illusion pertaining thereto, but of late I had been content to enjoy without seeking cause and effect.

Whence this unaccountable sensation of familiarity in regard to that vision? I took my throbbing head between my hands and laboriously sought a clue. A living dead man and a girl of rare beauty who had looked over his shoulder. Then I remembered.

Back in the fog of days and nights which veils a hashish addict’s memory, my money had given out. It seemed years or possibly centuries, but my stagnant reason told me that it had probably been only a few days. At any rate, I had presented myself at Yun Shatu’s sordid dive as usual and had been thrown out by the great Negro, Hassim, when it was learned I had no more money.

My universe crashing to pieces about me, and my nerves humming like taut piano wires for the vital need that was mine, I crouched in the gutter and gibbered bestially, till Hassim swaggered out and stilled my yammerings with a blow that felled me, half-stunned.

Then as I presently rose, staggeringly and with no thought save of the river which flowed with cool murmur so near me–as I rose, a light hand was laid like the touch of a rose on my arm. I turned with a frightened start, and stood spellbound before the vision of loveliness which met my gaze. Dark eyes limpid with pity surveyed me and the little hand on my ragged sleeve drew me toward the door of the Dream Temple. I shrank back, but a low voice, soft and musical, urged me, and filled with a trust that was strange, I shambled along with my beautiful guide.

At the door Hassim met us, cruel hands lifted and a dark scowl on his ape-like brow, but as I cowered there, expecting a blow, he halted before the girl’s upraised hand and her word of command, which had taken on an imperious note.