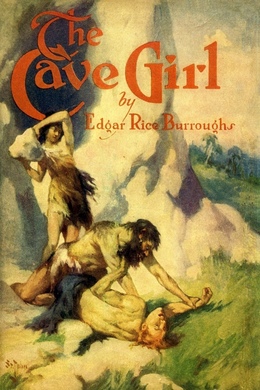 The transformation of a highly civilized, blue-blooded young Bostonian, into the savage bone-and-muscle chief of a band of shaggy cavemen is a challenge worthy of the talents of the man who created Tarzan of the Apes. In this tale, Burroughs tells, in a thrill-after-thrill novel, the story of Waldo Smith-Jones and how his desperate effort to survive on a lost island of primitive men and primitive beasts. How Waldo was given the name of Thandar, how he had won the hand of the cave princess Nadara, and how he overcame the most desperate of odds make this a real Tarzan-type epic.

The dim shadow of the thing was but a blur against the dim shadows of the wood behind it. The young man could distinguish no outline that might mark the presence as either brute or human. He could see no eyes, yet he knew that somewhere from out of that noiseless mass stealthy eyes were fixed upon him. This was the fourth time that the thing had crept from out the wood as darkness was settling—the fourth time during those three horrible weeks since he had been cast upon that lonely shore that he had watched, terror-stricken, while night engulfed the shadowy form that lurked at the forest’s edge.

It had never attacked him, but to his distorted imagination it seemed to slink closer and closer as night fell—waiting, always waiting for the moment that it might find him unprepared.

Waldo Emerson Smith-Jones was not overly courageous. He had been reared among surroundings of culture plus and ultra- intellectuality in the exclusive Back Bay home of his ancestors. He had been taught to look with contempt upon all that savored of muscular superiority—such things were gross, brutal, primitive. It had been a giant intellect only that he had craved—he and a fond mother—and their wishes had been fulfilled. At twenty-one Waldo was an animated encyclopedia—and about as muscular as a real one. Now he slunk shivering with fright at the very edge of the beach, as far from the grim forest as he could get. Cold sweat broke from every pore of his long, lank, six- foot-two body. His skinny arms and legs trembled as with palsy. Occasionally he coughed—it had been the cough that had banished him upon this ill-starred sea voyage. As he crouched in the sand, staring with wide, horror-dilated eyes into the black night, great tears rolled down his thin, white cheeks.

It was with difficulty that he restrained an overpowering desire to shriek. His mind was filled with forlorn regrets that he had not remained at home to meet the wasting death that the doctor had predicted—a peaceful death at least—not the brutal end which faced him now.

The lazy swell of the South Pacific lapped his legs, stretched upon the sand, for he had retreated before that menacing shadow as far as the ocean would permit. As the slow minutes dragged into age- long hours, the nervous strain told so heavily upon the weak boy that toward midnight he lapsed into merciful unconsciousness.

The warm sun awoke him the following morning, but it brought with it but a faint renewal of courage. Things could not creep to his side unseen now, but still they could come, for the sun would not protect him. Even now some savage beast might be lurking just within the forest. The thought unnerved him to such an extent that he dared not venture to the woods for the fruit that had formed the major portion of his sustenance. Along the beach he picked up a few mouthfuls of sea-food, but that was all.

The day passed, as had the other terrible days which had preceded it, in scanning alternately the ocean and the forest’s edge—the one for a ship and the other for the cruel death which he momentarily expected to see stalk out of the dreary shades to claim him.

A more practical and a braver man would have constructed some manner of shelter in which he might have spent his nights in comparative safety and comfort, but Waldo Emerson’s education had been conducted along lines of undiluted intellectuality—pursuits and knowledge which were practical were commonplace, and commonplaces were vulgar. It was preposterous that a Smith-Jones should ever have need of vulgar knowledge.

For the twenty-second time since the great wave had washed him from the steamer’s deck and hurled him, choking and sputtering, upon this inhospitable shore, Waldo Emerson saw the sun sinking rapidly toward the western horizon. As it descended the young man’s terror increased, and he kept his eyes glued upon the spot from which the shadow had emerged the previous evening. He felt that he could not endure another night of the torture he had passed through four times before. That he should go mad he was positive, and he commenced to tremble and whimper even while daylight yet remained. For a time he tried turning his back to the forest, and then he sat huddled up gazing out upon the ocean; but the tears which rolled down his cheeks so blurred his eyes that he saw nothing.

Finally he could endure it no longer, and with a sudden gasp of horror he wheeled toward the wood. There was nothing visible, yet he broke down and sobbed like a child, for loneliness and terror.

When he was able to control his tears for a moment he took the opportunity to scan the deepening shadows once more. The first glance brought a piercing shriek from his white lips.

The thing was there!