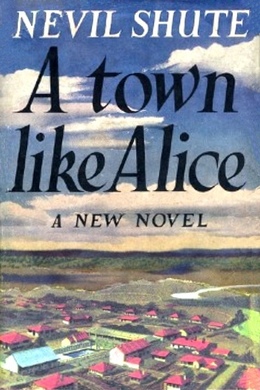 Jean Paget is just twenty years old and working in Malaya when the Japanese invasion begins. When she is captured she joins a group of other European women and children whom the Japanese force to march for miles through the jungle - an experience that leads to the deaths of many. Due to her courageous spirit and ability to speak Malay, Jean takes on the role of leader of the sorry gaggle of prisoners and many end up owing their lives to her indomitable spirit. While on the march, the group run into some Australian prisoners, one of whom, Joe Harman, helps them steal some food, and is horrifically punished by the Japanese as a result. After the war, Jean tracks Joe down in Australia and together they begin to dream of surmounting the past and transforming his one-horse outback town into a thriving community like Alice Springs…

I suppose there was a long pause after she said that. I remember being completely taken aback, and seeking refuge in my habit of saying nothing when you don’t know what to say. She must have felt reproof in my silence, I suppose, because she leaned towards me, and she said, “I know it’s a funny thing to want to do. May I tell you about it?”

I said, “Of course. Is this something to do with your experiences in the war?”

She nodded. “I’ve never told you about that. It’s not that I mind talking about it, but I hardly ever think about it now. It all seems so remote, as if it was something that happened to another person, years ago–something that you’d read in a book. As if it wasn’t me at all.”

She shook her head. “Not now, now that I’ve got this money.” She paused. “You’ve been so very kind to me,” she said. “I do want to try and make you understand.”

Her life, she said, had fallen into three parts, the first two so separate from the rest that she could hardly reconcile them with her present self. First, she had been a schoolgirl living with her mother in Southampton. They lived in a small, three-bedroomed house in a suburban street. There had been a period before that when they had all lived in Malaya, but they had left Malaya for good when she was eleven and her brother Donald was fourteen, and she had only confused memories of that earlier time. Apparently Arthur Paget had been living alone in Malaya when he met his death, his wife having brought the children home.

They lived the life of normal suburban English children, school and holidays passing in a gentle rhythm with the one great annual excitement of three weeks holiday in August in the Isle of Wight, at Seaview or at Freshwater. One thing differentiated them slightly from other families, in that they all spoke Malay. The children had learned it from the amah, of course, and their mother encouraged them to continue talking it in England, first as a joke and as a secret family language, but later for a very definite reason. When Arthur Paget drove his car into the tree near Ipoh he was travelling on the business of his company, and his widow became entitled to a pension under the company scheme. He had been a competent and a valuable man. The directors of the Kuala Perak Plantation Company, linking compassion with their quest for first-class staff, wrote to the widow offering to keep a position for the boy Donald as soon as he became nineteen. This was a good opening and one that they all welcomed; it meant that Donald was headed for Malaya and for rubber-planting as a career. The Malay language became a matter of importance in giving him a good start, for very few boys of nineteen going to the East for their first job can speak an Oriental language. That shrewd Scotswoman, their mother, saw to it that the children did not forget Malay.

Jean had liked Southampton well enough, and she had had a happy childhood there in a gentle orbit of home, school, the Regal cinema, and the ice-skating rink. Of all these influences the one that she remembered best was the ice rink, connected in her mind inevitably with Waldteufel’s Skaters Waltz. “It was a lovely place,” she said, staring reminiscently into the fire. “I suppose it wasn’t much, really–it was a wooden building, I think, converted out of something that had been put up in the first war. We skated there about twice a week ever since I can remember, and it was always lovely. The music, and the clean, swift movement, and all the boys and girls. The coloured lights, the crowd, and the ring of skates. I got quite good at it. Mummy got me a costume–black tights and bodice, and a little short skirt, you know. Dancing was wonderful upon the ice … “

She turned to me. “You know, out in Malaya, when we were dying of malaria and dysentery, shivering with fever in the rain, with no clothes and no food and nowhere to go, because no one wanted us, I used to think about the rink at Southampton more than anything. It was a sort of symbol of the life that used to be–something to hold on to in one’s mind.” She paused. “Directly I got back to England I went back to Southampton, as soon as I could–I had something or other to do down there, but really it was because all through those years I had promised myself that one day I would go back and skate there again. And it had been blitzed. It was just a blackened and a burnt-out shell–there’s no rink in Southampton now. I stood there on the pavement with the taxi waiting behind me with my boots and skates in my hand, and I couldn’t keep from crying with the disappointment. I don’t know what the taxi-driver thought of me.”