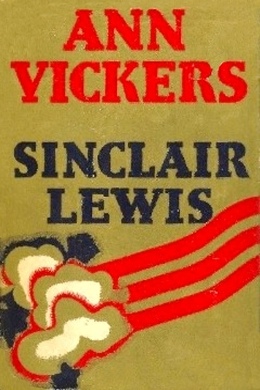 Some reviewers were outraged by Ann Vickers when it first appeared in 1933. “Persons unused to horrid and filthy things had better stay at a safe distance from this book,” wrote one. Lewis’s Ann Vickers is a complex character: a strong-minded prison superintendent dedicated to enlightened social reform, she also seeks to fulfill herself as a sexual being. Ann Vickers is in all respects her own person, standing up to the confining rules of her society.

Slow yellow river flowing, willows that gesture in tepid August airs, and four children playing at greatness, as, doubtless, great men themselves must play. Four children, sharp-voiced and innocent and eager, and blessedly unaware that compromise and weariness will come at forty-five.

The three boys, Ben, Dick, and Winthrop, having through all the past spring suffered from history lessons, sought to turn them to decent use by playing Queen Isabella and Columbus. There was dissension as to which of them should be Isabella. While they debated, there came into that willow grove, that little leaf-littered place holy to boyhood, a singing girl.

“Ah, no, gee, she’ll hog the whole thing,” said Ben. “But I guess she can play Iserbella better than anybody.”

“No, she ain’t much good at baseball, but she threw a snowball at Reverend Tengbom.”

“Yes, that’s so, she threw that snowball.”

The girl stopped before them, arms akimbo—a chunk of a girl, with sturdy shoulders and thin legs. Her one beauty, aside from the fresh clarity of her skin, was her eyes, dark, surprisingly large, and eager.

“What the dickens is Pedippus?”

“But the wild beasts of the desert, they were all around him, catamounts and everything, and he tamed them and they used to come hear him preach. I’m going to go preach to them now! And enormous big bears!”

He handed it over, and she inspected it judiciously. She had never had the famous weapon in her hand, though it was notorious through all of childland that Winthrop owned so remarkable a possession. It was a real revolver, a .22, and complete in all its parts, though it is true that the barrel was so full of rust that a toothpick could not have been inserted at the muzzle. Ann waved it, fascinated and a little nervous. To hold it made her feel heroic and active; it is to be feared that she lost immediately the chaste austerity of Pedippus.

“You’re Iserbella and I’m Columbus,” said Winthrop, “and Ben is King Ferdinand, and Dick is a jealous courtesan. You see all the guys in the court are crabbing me, and you tell ’em to lay off and——”

Ann darted to a broken willow bough. She held it drooping over her head with her left hand—always her right clutched the enchanted revolver—and mincing back to them she demanded, “Kneel down, my lieges. No, you Ferdinand, I guess you got to stand up, if you’re my concert—no, I guess maybe you better kneel, too, just to make sure. Now prithee, Columbus, what can I do for you today?”

“Ah, gee, I don’t know what to say…. Don’t listen to him, Queen, he’s a crazy galoot. There ain’t any America. All his ships will slide off the edge of the earth.”

“Who’s running this, courtesan? I am! Certainly he can have three ships, if I have to give him half of my kingdom. What thinkest thou, concert?—you Ben, I mean you?”

“Then get thee to the ships.”