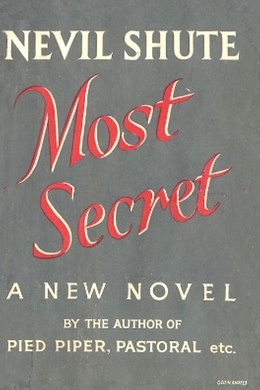 Aboard a fishing boat named “Genevieve,” a small group of British officers and French fishermen—armed only with a flame thrower and small arms—plan a secret commando mission against the might of the German army after the fall of France in World War II. Each man has experienced a terrible loss of one kind or another, and each is fully prepared to face the risks of their desperate gesture of defiance. Most Secret is classic Shute: a thrilling tale of sacrifice and courage and the heroism of ordinary men that will keep readers on the edge of their seats.

So much happened in the two years that I spent at the Admiralty, I had a finger in so many pies, that I have found it difficult to say exactly when it was that this thing began. From my engagement diary it seems to have been about the middle of July in 1941, and I should say that it began with a telephone call from McNeil.

I reached out for the receiver. I remember that it was a very hot day and I was flooded out with work. There was dust all over my desk because I had the window open, and outside the bricklayers were repairing what the Luftwaffe had done to us. I said irritably: “Six nine two.”

“Is that Commander Martin?”

“This is Brigadier McNeil. I am speaking from one hundred and sixty-four Pall Mall.”

“Oh, yes, sir?” I replied. The address meant nothing to me, and I wondered sourly why the Army could not say in short time who they were and what they wanted.

“Captain Oliver gave me your name. We’ve been talking about an operation this morning. I think perhaps I’d better come along and see you.”

“Very good, sir. When would you like to come?”

“About three o’clock this afternoon? Is that convenient to you?”

“That’s quite all right for me. I’ll expect you then.”

He came to me in the afternoon. He was a man of forty-five or fifty, a typical soldier, very smartly dressed. His belt, his buttons, and the stars and crowns upon his shoulders were beautifully polished; his uniform sat on him without a crease, and the red staff tabs blazed out immaculate from the lapels of his tunic. He had short, greyish hair and china-blue eyes. He looked pleasant enough, determined, absolutely straight, and–I thought at first–rather stupid. You felt to look at him that he would be wonderful upon a horse.

I got up as the messenger showed him in. “Good afternoon,” I said. “Will you sit down?”

He laid his hat and gloves upon the corner of my desk, and dropped his gas-mask on a chair. He said: “I understand that Admiral Thomson is away?”

“He’s away a good deal, sir,” I replied. “We deal with routine matters from this office in his absence. Anything that’s beyond us goes down to V.A.C.O. by the courier.”

“Oh, I see,” he said. “That’s his proper title, is it? Just wait a minute, and I’ll write that down.” He slipped a pencil and a notebook from his pocket; I watched him as he wrote, slightly amused.

He put them away again, and turned to me. “Well now,” he said. “Let’s start at the beginning. You know the office that I come from?”

I shook my head. “I’m afraid I don’t, sir. One hundred and sixty-four Pall Mall, did you say?”

“That’s right. Well…” He paused for a moment, considering his words. “We do various things from that office,” he said at last. “We come directly under the War Cabinet.” He hesitated again. “One of our jobs is to do what we can to keep up the morale of the French.”

I nodded, and waited for him to go on.

“That’s Cabinet policy, of course,” he said. “We mustn’t let them lose faith in a British victory. They never have lost faith, taking it by and large. Even in the worst days they believed that we would win. It’s our job to keep their faith in us alive.”

I passed him a cigarette. “I suppose our wireless broadcasts help in that,” I said. “Do they–the average Frenchman–does he listen to them much?”

“Oh, everybody listens,” he said. “The B.B.C. is doing a good job, for all that you read in the newspapers. But that’s not my concern. You’d never keep their heart up upon broadcast talks and news alone. But something concrete, any little bit of activity or sabotage that can be contrived–that puts new life in them. Just any little thing to show them that the Germans aren’t having things all their own way. These daylight sweeps that the R.A.F. are doing over France help us enormously.”

I knew now what was coming, more or less. “This activity and sabotage,” I said quietly. “You mean, you send people over to the other side?”

He blew a long cloud of smoke, and seemed to consider for a minute. “What I came over to see you people about was this,” he said. “One of our young men produced a scheme the other day–a proposal that we thought rather well of. But what he proposed was so much a naval operation that I put it up to Captain Oliver. He sent me over here to see your admiral.”

I took a cigarette myself from the packet on my desk and lit it. “This is all a bit outside my line,” I said. “Anything like this would have to go to V.A.C.O.”