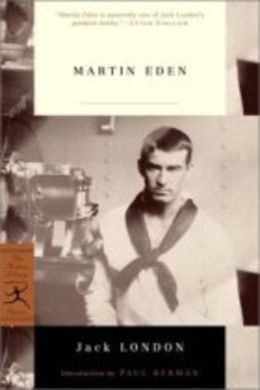 Martin Eden, Jack London’s semiautobiographical novel about a struggling young writer, is considered by many to be the author’s most mature work. Personifying London’s own dreams of education and literary fame as a young man in San Francisco, Martin Eden’s impassioned but ultimately ineffective battle to overcome his bleak circumstances makes him one of the most memorable and poignant characters Jack London ever created. As Paul Berman points out in his Introduction, “In Martin, [London] created one of the great twisted heroes of American literature . . . a hero doomed from the outset because his own passions are bigger and more complicated than any man could bear.”

The one opened the door with a latch-key and went in, followed by a young fellow who awkwardly removed his cap. He wore rough clothes that smacked of the sea, and he was manifestly out of place in the spacious hall in which he found himself. He did not know what to do with his cap, and was stuffing it into his coat pocket when the other took it from him. The act was done quietly and naturally, and the awkward young fellow appreciated it. “He understands,” was his thought. “He’ll see me through all right.”

He walked at the other’s heels with a swing to his shoulders, and his legs spread unwittingly, as if the level floors were tilting up and sinking down to the heave and lunge of the sea. The wide rooms seemed too narrow for his rolling gait, and to himself he was in terror lest his broad shoulders should collide with the doorways or sweep the bric-a-brac from the low mantel. He recoiled from side to side between the various objects and multiplied the hazards that in reality lodged only in his mind. Between a grand piano and a centre-table piled high with books was space for a half a dozen to walk abreast, yet he essayed it with trepidation. His heavy arms hung loosely at his sides. He did not know what to do with those arms and hands, and when, to his excited vision, one arm seemed liable to brush against the books on the table, he lurched away like a frightened horse, barely missing the piano stool. He watched the easy walk of the other in front of him, and for the first time realized that his walk was different from that of other men. He experienced a momentary pang of shame that he should walk so uncouthly. The sweat burst through the skin of his forehead in tiny beads, and he paused and mopped his bronzed face with his handkerchief.

“Hold on, Arthur, my boy,” he said, attempting to mask his anxiety with facetious utterance. “This is too much all at once for yours truly. Give me a chance to get my nerve. You know I didn’t want to come, an’ I guess your fam’ly ain’t hankerin’ to see me neither.”

“That’s all right,” was the reassuring answer. “You mustn’t be frightened at us. We’re just homely people–Hello, there’s a letter for me.”

He stepped back to the table, tore open the envelope, and began to read, giving the stranger an opportunity to recover himself. And the stranger understood and appreciated. His was the gift of sympathy, understanding; and beneath his alarmed exterior that sympathetic process went on. He mopped his forehead dry and glanced about him with a controlled face, though in the eyes there was an expression such as wild animals betray when they fear the trap. He was surrounded by the unknown, apprehensive of what might happen, ignorant of what he should do, aware that he walked and bore himself awkwardly, fearful that every attribute and power of him was similarly afflicted. He was keenly sensitive, hopelessly self-conscious, and the amused glance that the other stole privily at him over the top of the letter burned into him like a dagger-thrust. He saw the glance, but he gave no sign, for among the things he had learned was discipline. Also, that dagger-thrust went to his pride. He cursed himself for having come, and at the same time resolved that, happen what would, having come, he would carry it through. The lines of his face hardened, and into his eyes came a fighting light. He looked about more unconcernedly, sharply observant, every detail of the pretty interior registering itself on his brain. His eyes were wide apart; nothing in their field of vision escaped; and as they drank in the beauty before them the fighting light died out and a warm glow took its place. He was responsive to beauty, and here was cause to respond.

An oil painting caught and held him. A heavy surf thundered and burst over an outjutting rock; lowering storm-clouds covered the sky; and, outside the line of surf, a pilot-schooner, close-hauled, heeled over till every detail of her deck was visible, was surging along against a stormy sunset sky. There was beauty, and it drew him irresistibly. He forgot his awkward walk and came closer to the painting, very close. The beauty faded out of the canvas. His face expressed his bepuzzlement. He stared at what seemed a careless daub of paint, then stepped away. Immediately all the beauty flashed back into the canvas. “A trick picture,” was his thought, as he dismissed it, though in the midst of the multitudinous impressions he was receiving he found time to feel a prod of indignation that so much beauty should be sacrificed to make a trick. He did not know painting. He had been brought up on chromos and lithographs that were always definite and sharp, near or far. He had seen oil paintings, it was true, in the show windows of shops, but the glass of the windows had prevented his eager eyes from approaching too near.