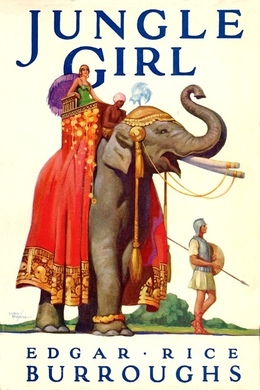 The Land of Hidden Men

In far Cambodia, where the Khmer kings built their mighty temples and vanished from the earth with their millions of subjects hundreds of years ago, leaving no trace upon the written pages of history, are secrets yet undivulged to man, jungles that even natives never enter. Into such went Gordon King. There are drama, mystery, adventure, and love awaiting you between the covers of this book. It is fast moving, spectacular, gripping, and once you start it, you will not want to lay it down until you have learned what fate awaits Gordon King and the Jungle Girl.

“My Lord, I may go no farther,” said the Cambodian.

The young white man turned in astonishment upon his native guide. Behind them lay the partially cleared trail along which they had come. It was overgrown with tall grass that concealed the tree-stumps that had been left behind the axes of the road-builders. Before them lay a ravine, at the near edge of which the trail ended. Beyond the ravine was the primitive jungle untouched by man.

“Why, we haven’t even started yet!” exclaimed the white man. “You cannot turn back now. What do you suppose I hired you for?”

“I promised to take my lord to the jungle,” replied the Cambodian. “There it is. I did not promise to enter it.”

Gordon King lighted a cigarette. “Let’s talk this thing over, my friend,” he said. “It is yet early morning. We can get into the jungle as far as I care to go and out again before sundown.”

The Cambodian shook his head. “I will wait for you here, my lord,” he said; “but I may not enter the jungle, and if you are wise you will not.”

“There are wild elephants, my lord, and tigers,” replied the Cambodian, “and panthers which hunt by day as well as by night.”

“Why do you suppose we brought two rifles?” demanded the white. “At Kompong-Thom they told me you were a good shot and a brave man. You knew that we should have no need for rifles up to this point. No, sir, you have lost your nerve at the last minute, and I do not believe that it is because of tigers or wild elephants.”

“There are other things deep in the jungle, my lord, that no man may look upon and live.”

“What, for example?” demanded King.

“The ghosts of my ancestors,” answered the Cambodian, “the Khmers who dwelt here in great cities ages ago. Within the dark shadows of the jungle the ruins of their cities still stand, and down the dark aisles of the forest pass the ancient kings and warriors and little sad-faced queens on ghostly elephants. Fleeing always from the horrible fate that overtook them in life, they pass for ever down the corridors of the jungle, and with them are the millions of the ghostly dead that once were their subjects. We might escape My Lord the Tiger and the wild elephants, but no man may look upon the ghosts of the dead Khmers and live.”

“We shall be out before dark,” insisted King.

“They are abroad both by day and by night,” said the Cambodian. “It is the curse of Siva, the Destroyer.”

King shrugged his shoulders, stamped out his cigarette and picked up his rifle. “Wait for me here, then,” he said. “I shall be out before dark.”

“You will never come out,” said the Cambodian.

Beyond the ravine, savage, mysterious, rose the jungle, its depth screened from view by the spectral trunks of fromagers and a tangle of bamboo. At first the man could find no opening in that solid wall of vegetation. In its sheath, at his side, hung a heavy knife, but already the young day was so oppressively hot that the man did not relish the idea of exhausting himself at the very outset of his adventure if he could find some easier way. That it would be still hotter he knew, for Cambodia lies but twelve degrees above the equator in the same latitude as Nicaragua, the Sudan, and other places infamous for their heat.

Along the edge of the ravine he searched, until at last he was rewarded by what appeared to be not by any means a trail but a far less formidable growth of bamboo through which he saw that he might easily force his way. Glancing back, he saw his Cambodian guide squatted upon his heels in mournful meditation. For an instant the young man hesitated, as though he was of a mind to try again to persuade the Cambodian to accompany him; but, as though immediately conscious of the futility of any such appeal, he turned again and pushed his way into the jungle.

He had advanced but a short distance when the heavy undergrowth gave way to a much more open forest. The spreading branches of the lofty trees cast upon the ground a perpetual shade, which had discouraged a heavy growth of underbrush.

How different looked the jungle from any picture that his imagination had conjured! How mysterious, but above all, how gloomy and how sinister! A fitting haunt, indeed, for the ghosts of weeping queens and murdered kings. Beneath his breath King cursed his Cambodian guide. He felt no fear, but he did feel an unutterable loneliness.