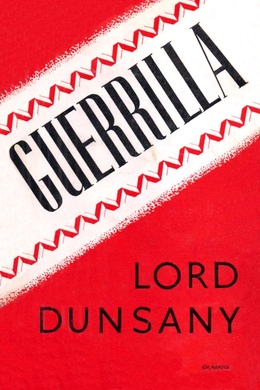 When the Germans conquered the Land, Srebnitz left school to join Hlaka’s guerrilla band on the Mountain. The Land is presumably Greece but it might be any land fighting for its liberty. The men of the Mountain are not individuals but figures from a poetic legend. Otherwise Irish Lord Dunsany’s latest invention is pure adventure story.

The army had surrendered, the Germans were through the mountains; and what was always referred to as The Land, as though in reality there were no other country to care about, was one more particle of the German loot. To men accustomed to horses, the Germans had come with amazing speed; to men who never spoke of a distance by measurement, but only of the time it took to get from one place to another, their pace was bewildering. One day they were ringing their bells in the little capital, for news of a fine stand that one of their divisions had made. The next day the Germans were marching down the main street.

Puzzled citizens were walking slowly about the central square; and, when a man stood up on a dais where tea was usually served in the afternoons, and began to make a speech, there was soon a crowd. A few politenesses and little flatteries, and he began to explain the position. England had begun the war, he explained, by attacking Poland. The Germans had therefore had to establish a defensive position there; and, in order to make this impregnable, they had to occupy several other countries as a purely temporary measure. To these countries they came for the countries’ own good, as otherwise England would seize them, and this was particularly the case with The Land. Hitler himself had appointed a Protector for The Land, and, if he were duly obeyed, his protection would be equally shared by all, and The Land would have the advantage of the highest possible culture, which was only to be enjoyed by those nations banded together in the new European order established by Adolf Hitler. Resistance would be most severely punished, and was also useless, because they had no rifles, and could not possibly fight in the plains, where they would be helpless against the big German tanks. Anyone who went into the mountains would be foolish, because the German aeroplanes, of which there were hundreds of thousands, could go over the mountains as easily as tanks could go over the plains, and even quicker. The army had surrendered, and it was the duty of all civilians to maintain order and wear a quiet demeanour. The Germans wished them well, and he reciprocated by calling for three cheers for Adolf Hitler. He got a cheer from a few; the rest were silent; and three men who had not cheered were led away by German policemen and instantly shot.

The sound of the volley from a small wood near by, in which the men were shot, came, as it was intended to come, to the central square. But instead of having an effect, as the Germans had planned, it had two effects. One effect was the one the Germans intended, merely fear; but on most of the crowd the effect was one that the Germans have never understood.

There was no protest: all in the square were unarmed. The crowd moved quickly away from the speaker, and slowly out of the square; Srebnitz was among them, the nephew of the old man who told this story in London. Srebnitz had just left school and not yet gone to the university, where he was due for his first term in a fortnight’s time. He went away mournfully, about halfway between the two moods I have mentioned. He went back to his home, where he lived with his father and mother in a street not far from the square. He went into the room in which his parents were sitting. His mother looked up quickly when he came in, but said nothing. His father did not even look up. At last Srebnitz spoke.

“Is The Land finished?” he said.

His father smiled grimly. “That is impossible,” he said.

“Oh, no,” was his mother’s answer to Srebnitz.

“Why is it impossible?” asked the boy.

“After three thousand years of freedom,” said his father, “it cannot be lost.”

“You don’t know what three thousand years are,” his father replied. “In all that time freedom grows so hard that it is like a piece of rock at the core of a mountain, that cannot be broken or ground away, and cannot disappear ever.”

“We have no rifles,” said his son.