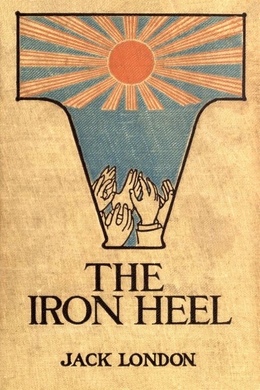 Jack London’s dystopian novel about the rise of oligarchic tyranny in the United States. Playing upon the socialistic themes that were so prevalent at the beginning of the 20th century, The Iron Heel tells the story of a wealthy class that squeezes out the middle class and effectively rules for three centuries until a revolution ushers in the “Brotherhood of Man”. As important a commentary today as when it was first written, London’s novel is a chilling depiction of a possible future world and an excellent exposition on the struggle between socio-economic classes.

The soft summer wind stirs the redwoods, and Wild-Water ripples sweet cadences over its mossy stones. There are butterflies in the sunshine, and from everywhere arises the drowsy hum of bees. It is so quiet and peaceful, and I sit here, and ponder, and am restless. It is the quiet that makes me restless. It seems unreal. All the world is quiet, but it is the quiet before the storm. I strain my ears, and all my senses, for some betrayal of that impending storm. Oh, that it may not be premature! That it may not be premature!

Small wonder that I am restless. I think, and think, and I cannot cease from thinking. I have been in the thick of life so long that I am oppressed by the peace and quiet, and I cannot forbear from dwelling upon that mad maelstrom of death and destruction so soon to burst forth. In my ears are the cries of the stricken; and I can see, as I have seen in the past, all the marring and mangling of the sweet, beautiful flesh, and the souls torn with violence from proud bodies and hurled to God. Thus do we poor humans attain our ends, striving through carnage and destruction to bring lasting peace and happiness upon the earth.

And then I am lonely. When I do not think of what is to come, I think of what has been and is no more–my Eagle, beating with tireless wings the void, soaring toward what was ever his sun, the flaming ideal of human freedom. I cannot sit idly by and wait the great event that is his making, though he is not here to see. He devoted all the years of his manhood to it, and for it he gave his life. It is his handiwork. He made it.

And so it is, in this anxious time of waiting, that I shall write of my husband. There is much light that I alone of all persons living can throw upon his character, and so noble a character cannot be blazoned forth too brightly. His was a great soul, and, when my love grows unselfish, my chiefest regret is that he is not here to witness to-morrow’s dawn. We cannot fail. He has built too stoutly and too surely for that. Woe to the Iron Heel! Soon shall it be thrust back from off prostrate humanity. When the word goes forth, the labor hosts of all the world shall rise. There has been nothing like it in the history of the world. The solidarity of labor is assured, and for the first time will there be an international revolution wide as the world is wide.

You see, I am full of what is impending. I have lived it day and night utterly and for so long that it is ever present in my mind. For that matter, I cannot think of my husband without thinking of it. He was the soul of it, and how can I possibly separate the two in thought?

As I have said, there is much light that I alone can throw upon his character. It is well known that he toiled hard for liberty and suffered sore. How hard he toiled and how greatly he suffered, I well know; for I have been with him during these twenty anxious years and I know his patience, his untiring effort, his infinite devotion to the Cause for which, only two months gone, he laid down his life.

I shall try to write simply and to tell here how Ernest Everhard entered my life–how I first met him, how he grew until I became a part of him, and the tremendous changes he wrought in my life. In this way may you look at him through my eyes and learn him as I learned him–in all save the things too secret and sweet for me to tell.

It was in February, 1912, that I first met him, when, as a guest of my father’s at dinner, he came to our house in Berkeley. I cannot say that my very first impression of him was favorable. He was one of many at dinner, and in the drawing-room where we gathered and waited for all to arrive, he made a rather incongruous appearance. It was “preacher’s night,” as my father privately called it, and Ernest was certainly out of place in the midst of the churchmen.

In the first place, his clothes did not fit him. He wore a ready-made suit of dark cloth that was ill adjusted to his body. In fact, no ready-made suit of clothes ever could fit his body. And on this night, as always, the cloth bulged with his muscles, while the coat between the shoulders, what of the heavy shoulder-development, was a maze of wrinkles. His neck was the neck of a prize-fighter, thick and strong. So this was the social philosopher and ex-horseshoer my father had discovered, was my thought. And he certainly looked it with those bulging muscles and that bull-throat. Immediately I classified him–a sort of prodigy, I thought, a Blind Tom of the working class.