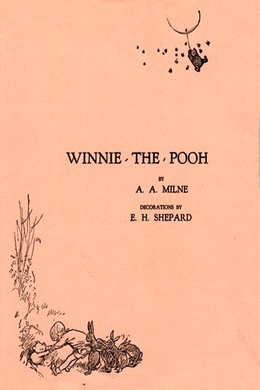 The adventures of Christopher Robin and his friends in which Pooh Bear uses a balloon to get honey, Piglet meets a Heffalump, and Eeyore has a birthday. These tales still speak to all of us with the freshness that distinguishes true storytelling.

Here is Edward Bear, coming downstairs now, bump, bump, bump, on the back of his head, behind Christopher Robin. It is, as far as he knows, the only way of coming downstairs, but sometimes he feels that there really is another way, if only he could stop bumping for a moment and think of it. And then he feels that perhaps there isn’t. Anyhow, here he is at the bottom, and ready to be introduced to you. Winnie-the-Pooh.

When I first heard his name, I said, just as you are going to say, “But I thought he was a boy?”

“So did I,” said Christopher Robin.

“Then you can’t call him Winnie?”

“Ah, yes, now I do,” I said quickly; and I hope you do too, because it is all the explanation you are going to get.

Sometimes Winnie-the-Pooh likes a game of some sort when he comes downstairs, and sometimes he likes to sit quietly in front of the fire and listen to a story. This evening—-

“What about a story?” said Christopher Robin.

“Could you very sweetly tell Winnie-the-Pooh one?”

“I suppose I could,” I said. “What sort of stories does he like?”

“About himself. Because he’s that sort of Bear.”

“So could you very sweetly?”

Once upon a time, a very long time ago now, about last Friday, Winnie-the-Pooh lived in a forest all by himself under the name of Sanders.

(“What does ‘under the name’ mean?” asked Christopher Robin.

“It means he had the name over the door in gold letters, and lived under it.”

Winnie-the-Pooh sat down at the foot of the tree, put his head between his paws and began to think.

Then he thought another long time, and said: “And the only reason for being a bee that I know of is making honey.”

And then he got up, and said: “And the only reason for making honey is so as I can eat it.” So he began to climb the tree.

He was getting rather tired by this time, so that is why he sang a Complaining Song. He was nearly there now, and if he just stood on that branch …

“Oh, help!” said Pooh, as he dropped ten feet on the branch below him.

“If only I hadn’t—-“ he said, as he bounced twenty feet on to the next branch.

“Of course, it was rather—-“ he admitted, as he slithered very quickly through the next six branches.

“It all comes, I suppose,” he decided, as he said good-bye to the last branch, spun round three times, and flew gracefully into a gorse-bush, “it all comes of liking honey so much. Oh, help!”

He crawled out of the gorse-bush, brushed the prickles from his nose, and began to think again. And the first person he thought of was Christopher Robin.

(“Was that me?” said Christopher Robin in an awed voice, hardly daring to believe it.

Christopher Robin said nothing, but his eyes got larger and larger, and his face got pinker and pinker.)

So Winnie-the-Pooh went round to his friend Christopher Robin, who lived behind a green door in another part of the forest.

“I wonder if you’ve got such a thing as a balloon about you?”