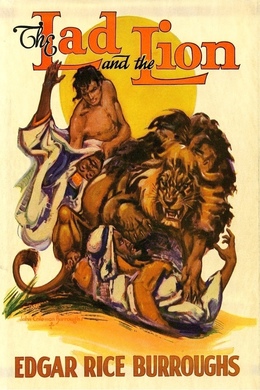 The Lad and the Lion

The madman turned all his attention to the youth, who, standing at the rail of the derelict ship, was unaware of his extreme danger. Like a beast of prey the older man crept stealthily toward his intended victim… In a remote European kingdom, plotters had moved toward the murder of an old king and his young heir, Michael. But the lad escaped, and, through a series of the chilling, heart stopping adventures only Edgar Rice Burroughs could have written, finds himself on the shores of Africa, his only friend and protector a giant feral cat. Then, one day, Michael and his loyal friend find themselves face to face with the deadliest enemy of all.

A stately pile of ancient masonry rose in a great park of linden trees and ash and oak. There were broad, formal gardens and great expanses of level sward. There were gleaming marble fountains throwing their shimmering waters into the warm sunlight. There were men in uniform standing guard— tall, splendid fellows. A sad-faced old man walked along neat graveled pathways through the gardens, past the marble fountains. He was a very erect old man whose unbending shoulders and firm gait belied his age, for he was really a very old man. At the old man’s side walked a little boy; and when the two approached them, the soldiers snapped their burnished pieces smartly in salute.

The old man was inordinately proud of the little boy. That was why he liked to have him walk with him in the gardens and down near the great gates where people often gathered to see them as they passed. He liked to have him ride with him through the city in one of the royal carriages where all the people might see him; for when the old man died, the little boy would be king.

“The people seem to like us,” said the boy, as they passed the gates and the crowd waved and smiled and cheered. “That is why I cannot understand why they killed my father.”

“Well,” said the boy, with finality, “they like you; and when I am king, I shall try to rule as you have.”

“I could wish that you might never be king,” said the old man, bitterly. “It is a thankless job, Michael.”

Three men sat on the veranda of a hunting lodge in the cool woods a few miles from the capital. One was a little, myopic man with horn-rimmed spectacles and thin, disordered hair that had not known shears for many weeks. His collar was soiled; so was his shirt, but most of that which showed in the V of his coat collar was hidden by a Windsor tie. He was a mussy little man with mussy clothes and trousers which made him appear about to jump, when he stood. His mind, however, was not mussy. Its facts were well ordered and easily accessible to a glib tongue which could marshal them in any formation that seemed best adapted to the occasion; on it, all facts seemed plastic, assuming any guise the little man desired to give them. Often the little facts’ own mothers would not have recognized them.

The other two men were in easy tweeds; loose, comfortable clothes that did not, however, look as though they had been cut to fit someone else, or no one, as did the little man’s; also, they were well barbered, and their linen was clean—and linen.

“Your highness will understand,” said the little man, “that in the event of an accident which removed the king and Prince Michael we are to have a new constitution, a far more liberal constitution, and that the representatives of the people shall have the deciding voice in government.”

The older of the other two nodded. “I understand, Meyer,” he said.

“Certainly. I presume you will be chancellor when I am king?”

“That is understood,” said Meyer. “My associates, who collaborated with me in drawing up the new constitution, would insist upon it.”

“So the constitution is already drawn,” said the younger man, a little testily. “Would it not be well to let his highness see and approve it?”

“That will not be necessary,” said Meyer.

“Why?” demanded the younger man.

“Because my associates would not brook any changes in this document into which they have put their best efforts,” replied Meyer, suavely.

“Rubbish!” exclaimed the young man. “Why don’t you come right out and say the king will be nothing but a figurehead—that you will, in reality, be king?”

“At least, the new king will be alive,” said Meyer.

“Come, come, Paul!” said the older man. “I am sure that everything that Meyer and his associates contemplate is in the best interests of the people and the country.”

“And we should interpose no obstacles,” added H.R.H. Prince Otto.

“We are peculiarly fortunate in being able to eliminate obstacles permanently,” said Meyer, looking at Sarnya through the thick lenses of his glasses; “and now that everything is understood, I must be going. You know how to reach me if you think it necessary. I—always—know —how—to - reach—you. Good day, your highness; good day, Count Sarnya.”