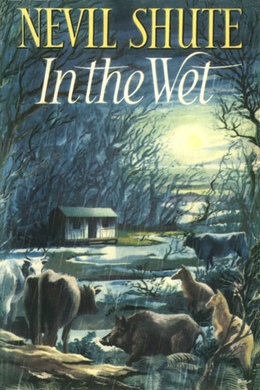 Shute’s speculative glance into the future of the British Empire. An elderly clergyman stationed in the Australian bush is called to the bedside of a dying derelict. In his delirium Stevie tells a story of England in 1983 through the medium of a squadron air pilot in the service of Queen Elizabeth II. It is the rainy season. Drunk and delirious, an old man lies dying in the Queensland bush. In his opium-hazed last hours, a priest finds his deserted shack and listens to his last words. Half-awake and half-dreaming the old man tells the story of an adventure set decades in the future, in a very different world…

I have never before sat down to write anything so long as this may be, though I have written plenty of sermons and articles for parish magazines. I don’t really know how to set about it, or how much I shall have to write, but as nobody is very likely to read it but myself perhaps that is of no great consequence. The fact is, however, that I have been so troubled in my mind since I came back from Blazing Downs that I have not been able to sleep very well or to work wholeheartedly upon my parish business, and my services in the church have been mechanical and absent-minded. I think it will help me if I try to write down what it is that has been bothering me, and then I think that I may send it to the Bishop for him to look over. Perhaps the trouble is that I am getting a little old for duty in this somewhat unusual parish, and if that should prove to be the case I must accept whatever he decides.

Writing materials are not very easy to come by here, because Landsborough is only a small town. I went down to Art Duncan’s store just now to buy some paper, but all he had was pads of thin airmail paper and these exercise books that Miss Foster uses for the older children in the school when they have got past using slates. I got six of these books and I expect I shall want more before I have written all that I have to say, but that only leaves nine books in the store and I would not like to think that I was running the school short. I have asked Art to get in some more, and he will send an order out to Townsville by next week’s aeroplane.

In fairness to anybody who should read what I am writing I think I should begin by putting down something about myself, so that he can form his own judgment on the credibility of my account. My name is Roger Hargreaves and I have been ordained as a priest in the Church of England for forty-one years; I was sixty-three years old last month. I was born in the year 1890 at Portsmouth in the south of England and I was educated at Portsmouth Grammar School. I was ordained in 1912 and became curate of St. Mark’s, at Guildford. In 1914 when the war broke out I went into the army as a chaplain, and I saw service in Gallipoli and in France. I was very fortunate in the war, because although I was blown up by a shell at Delville Wood during the Somme battle I was only in hospital for a few weeks, and I was able to return to the front line in less than four months.

After the war I was rather unsettled, and disinclined to return to parochial work in an English town. I was twenty-eight years old, unmarried, and with nothing very much to keep me in England. It seemed to me that while I was still young and vigorous I should give a few years of my life to service in more difficult places, and after talking it over with the Bishop I left for Australia to join the Bush Brotherhood in Queensland.

I served in the Bush Brotherhood for fourteen years, travelling very widely from Cloncurry to Toowoomba, from Birdsville to Burdekin. During that fourteen years I had no settled home, and I did not very often sleep more than two nights in one place. I drew fifty pounds a year from the Brotherhood which was quite sufficient for my clothes and personal expenses, and I had a small expense account for travelling though I seldom had to draw upon it. The people of the outback were most generous in helping me to travel from station to station for my christenings and weddings and funerals and services. They would always take me on to the next place in a truck or a utility, and in the wet when the roads are impassable to motors because of the mud I have been given the loan of a horse for as long as three months, so that I have been able to continue with my duties all through the rainy season.