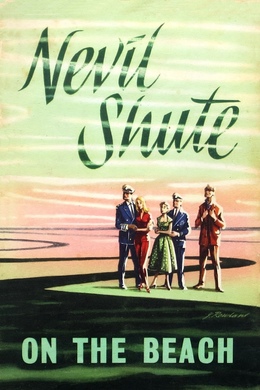 After a nuclear World War III has destroyed most of the globe, the few remaining survivors in southern Australia await the radioactive cloud that is heading their way and bringing certain death to everyone in its path. Among them is an American submarine captain struggling to resist the knowledge that his wife and children in the United States must be dead. Then a faint Morse code signal is picked up, transmitting from somewhere near Seattle, and Captain Towers must lead his submarine crew on a bleak tour of the ruined world in a desperate search for signs of life. On the Beach is a remarkably convincing portrait of how ordinary people might face the most unimaginable nightmare.

Lieutenant Commander Peter Holmes of the Royal Australian Navy woke soon after dawn. He lay drowsily for a while, lulled by the warm comfort of Mary sleeping beside him, watching the first light of the Australian sun upon the cretonne curtains of their room. He knew from the sun’s rays that it was about five o’clock; very soon the light would wake his baby daughter Jennifer in her cot, and then they would have to get up and start doing things. No need to start before that happened; he could lie a little longer.

He woke happy, and it was some time before his conscious senses realized and pinned down the origin of this happiness. It was not Christmas, because that was over. He had illuminated the little fir tree in their garden with a string of coloured lights with a long lead to the plug beside the fireplace in the lounge, a small replica of the great illuminated tree a mile away outside the town hall of Falmouth. They had had a barbecue in the garden on the evening of Christmas Day, with a few friends. Christmas was over, and this—his mind turned over slowly—this must be Thursday the 27th. As he lay in bed the sunburn on his back was still a little sore from their day on the beach yesterday, and from sailing in the race. He would do well to keep his shirt on today. And then, as consciousness came fully to him, he realized that of course he would keep his shirt on today. He had a date at eleven o’clock in the Second Naval Member’s office, in the Navy Department up in Melbourne. It meant a new appointment, his first work for seven months. It could even mean a seagoing job if he were very lucky, and he ached for a ship again.

It meant work, anyway. The thought of it had made him happy when he went to sleep, and his happiness had lasted through the night. He had had no appointment since he had been promoted lieutenant commander in August and in the circumstances of the time he had almost given up hope of ever working again. The Navy Department, however, had maintained him on full pay throughout these months, and he was grateful to them.

The baby stirred, and started chuntering and making little whimpering noises. The naval officer reached out and turned the switch of the electric kettle on the tray of tea things and baby food beside the bed, and Mary stirred beside him. She asked the time, and he told her. Then he kissed her, and said, “It’s a lovely morning again.”

She sat up, brushing back her hair. “I got so burned yesterday. I put some calamine stuff on Jennifer last night, but I really don’t think she ought to go down to the beach again today.” Then she, too, recollected. “Oh—Peter, it’s today you’re going up to Melbourne, isn’t it?”

He nodded. “I should stay at home, have a day in the shade.”

He got up and went to the bathroom. When he came back Mary was up, too; the baby was sitting on her pot and Mary was drawing a comb through her hair before the glass. He sat down on the edge of the bed in a horizontal beam of sunlight, and made the tea.

She said, “It’s going to be very hot in Melbourne today, Peter. I thought we might go down to the club about four, and you join us there for a swim. I could take the trailer and your bathers.”

They had a small car in the garage, but since the short war had ended a year previously it remained unused. However, Peter Holmes was an ingenious man and good with tools, and he had contrived a tolerable substitute. Both Mary and he had bicycles. He had built a small two-wheeled trailer using the front wheels of two motor bicycles, and he had contrived a trailer hitch both on Mary’s bicycle and his own so that either could pull this thing, which served them as a perambulator and a general goods carrier. Their chief trouble was the long hill up from Falmouth.

He nodded. “That’s not a bad idea. I’ll take my bike and leave it at the station.”

“What train have you got to catch?”

“The nine-five.” He sipped his tea and glanced at his watch. “I’ll go and get the milk as soon as I’ve drunk this.”