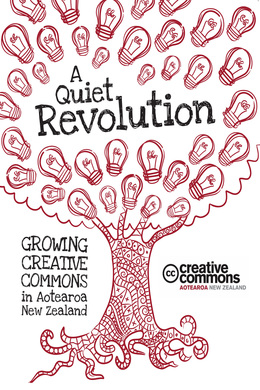 The past few years have seen a quiet, relatively well behaved, and entirely legal revolution in Aotearoa: the growth of a thriving Commons of works made available under Creative Commons open copyright licences. A Quiet Revolution tells Kiwi stories as diverse as open source houses, teachers banding together to share resources, government departments making their data available for anyone to use, and artists sharing their work in a spirit of collaboration and community – and shows how something as seemingly dry as copyright licensing can have profound impacts on our society, culture and economy. If you’ve ever wondered how copyright applies to you, how Creative Commons actually works, or why so many people choose to use Creative Commons licensing, then here are the answers.

In September 2012 a group of 30 Swedish maths enthusiasts got together for a Oppikirjamaraton. For non-Swedish speakers, this was a ‘textbook marathon’, in which volunteers wrote a secondary school mathematics textbook in a single weekend. The textbook was then released for free, under a Creative Commons licence, for anyone to adapt and reuse.

Inspired by the Oppikirjamaraton, a group at the University of Otago Te Whare Wānanga o Otāgo decided to follow suit and write their own textbook for undergraduate students of Media Studies. Erika Pearson, Senior Lecturer at Otago’s Media, Film and Communication Department, spearheaded the project because, as she put it, “textbooks currently available for New Zealand first-year students are often produced overseas, usually the US, and can have a cripplingly high price tag.

“Open texts are not only more affordable for students, they also are more flexible for teachers, who can pull apart open textbooks to find the more relevant and useful materials for their classes.”

And so, on the weekend of 16–17 November 2013, they began the Media Text Hack project: using the Pomodoro Technique and taking shifts of 25 minutes on, five minutes off, a group of lecturers and postgraduate students put together a textbook. Over the next few weeks, they filled any gaps left over from the weekend, and continued to edit the work.

As Richard White, Manager Copyright and Open Access at the University of Otago, put it at the time, “This is a real 21st-century textbook – I hesitate to even use that word – that harnesses the power of the web to break out of the print model we’ve had for the last several hundred years. It’s Open Access, which means a lot of different things: it’s free; anyone can read it, use it, adapt it; it’s also open to wider scrutiny, which helps improve it over time.”

The textbook was quickly picked up by British Colombia Campus and accessed by users all over the world. In March 2014, Erika then wrote the Cookbook, a how-to guide outlining the successes, failures and challenges of the Media Text Hack project. This, too, was made available under a Creative Commons licence. In 2015, the book became the official undergraduate textbook for an undergraduate Media Studies course at the University of Otago, and has been used by students and educators around the world, from Canada to Cape Town.

At first blush, the Media Text Hack project appears quite radical: it bypassed an established industry, that of textbook publishing; it embraced new methodologies; by utilising the energy of postgraduate and early career researchers, it circumvented conventional academic hierarchies around the production of teachable content; and, of course, it was released free of technical, price and legal restrictions on reuse.

In the end, though, this Kiwi Oppikirjamaraton was fundamentally about a group of researchers and educators using existing technologies to create and share knowledge as widely as they possibly could – the core purpose of New Zealand’s education institutions. In so doing, they will likely save thousands of students from buying expensive, closed-access textbooks.

The Media Text Hack is one of many such projects. Taken at a global level, open textbook projects like this have the potential to save students worldwide many billions of dollars, and to also lead to better educational outcomes. According to the Student Public Interest Research Group in the United States, 65% of surveyed students choose not to buy a college textbook because it’s too expensive, and 94% of these report that they suffer academically because of this choice.

Figures such as these have led the United States’ Department of Labor under the Obama administration to dedicate $2 billion in contestable funding to produce Open Educational Resources (OERs) for American community colleges, and have driven many other OER projects in nearly every country in the world.