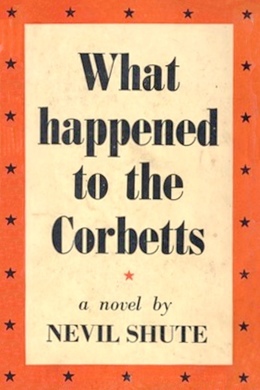 What Happened to the Corbetts

Set in 1938, this novel tells the story of the Corbetts, a family preparing for the coming war. As the world begins to collapse around them, they decide to chance their one means of escape and take to their small yacht on the Solent. Peter Corbett, a local lawyer, his wife, Joan, and their three children make the decision to move away from the war zone after their house, and Corbett’s offices, are destroyed. They move aboard their small yacht, kept on the river Hamble, but quickly realise that escaping to ports further from Southampton is the only answer. However, because of the fears of cholera and other diseases, many ports are under quarantine. Whilst on the open water of the English Channel, the Corbetts go to the assistance of some downed British naval pilots. Their commanding officer suggests that the family should head for the French port of Brest - where Corbett may volunteer for war service and his family may board a liner for the safety of Canada. The novel addresses the issues of the aftermath of bombing, such as the spread of disease from lack of clean water, and what may be done to relieve the distress of those affected by it.

Towards dawn Peter Corbett got up from the garage floor and, treading softly, moved into the driving seat of the car. Presently he fell into a doze, his head bowed forward on his arms, upon the steering wheel.

He woke an hour later, dazed and stiff. A grey light filled the little wooden building; it was early March. The rain drummed steadily upon the roof and dripped and pattered from the eaves with little liquid noises, as it had done all through the night. He stirred, and looked around him.

Behind him, in the rear seat of the car, lay Joan, his wife, sleeping uneasily. She was dressed oddly in an overcoat, pyjama trousers, and many woolly clothes; her short fair hair had fallen across her face in disarray. On the seat beside her was the basket cot with little Joan; so far as could be seen, the baby was asleep.

He moved, and looked out of the window of the car. Beside the car Sophie, their nurse, was lying on a Li-Lo on the oil-stained floor, covered with an eiderdown, sleeping with her mouth open and snoring a little. Beyond her there was another little bed, carefully screened between the garden roller and a box of silver sand for bulbs. From that the bright eyes of Phyllis, his six-year-old daughter, looked up into his own; beside her lay John, his three-year son, asleep.

Moving very quietly, he got out of the driving seat and stood erect beside the car; he had a headache, and was feeling very ill. From her bed upon the floor Phyllis whispered, “Daddy. May I get up?”

“Not yet,” he said mechanically. “It’s not time to get up yet. Go to sleep again.”

“Very loud,” he said. He moved over to the garage window and looked out. Everything seemed much the same, but he could not see beyond the garden.

“Daddy, were the bangs loud enough to be heard in London?”

“Not in London.” He was feeling sick; his mouth was coated and dry.

“Would the bangs have been heard in Portsmouth, Daddy?”

“Anyway, they’d have been heard all over Southampton, wouldn’t they, Daddy?”

“That’s right,” he said patiently. So much, indeed, was evident. “But now try to go to sleep again and don’t talk any more, or you’ll wake Mummy and John. There won’t be any more bangs now.”

He stepped carefully across the Li-Lo to the corner, and stooped over the little bed. He pulled the rug across her. “It’s not time to get up yet. Are you warm enough?”

“Yes, thank you, Daddy. Isn’t it fun, sleeping in the garage?”

He moved quietly down the garage past the car, opened the door, and went out into the garden. His raincoat had half dried upon him in the night. He had no hat; the rain beat on his face and ruffled hair, and this refreshed him.

He lived in a semi-detached house, a large house in a good suburban road. It had a well-kept garden stretching out behind to the back road; the wooden garage was at the end remote from the house. He lived comfortably in a fairly modest style; he was the junior partner of Johnson, Bellinger, and Corbett, solicitors, in Southampton. He ran a medium-sized car which he had bought second-hand, and a nine-ton cutter yacht which he had bought sixteenth-hand; these, with his three children, absorbed the whole of his income. He was thirty-four years old, a pleasant, ordinary young man of rather a studious turn.

He stood for a few moments in the garden in the rain, looking around. His house looked much the same as usual, so did the houses on each side of it. There was a window broken in a house a few doors down the road; otherwise he could see nothing wrong. He moved up the garden, opened the garden door, and went into his dining room.

A sudden draught of cold air blew into his face, fluttering the papers on a table where the telephone was standing.

He frowned. There was a window open somewhere in the house. Someone had left it open in the confusion of the night–and on a rainy night like that! It was too bad.

He passed through the hall into the drawing room in the front of the house. In fact, the windows were all open, but they had not been left open by the maids. The glass in every pane was cracked and shattered. Most of it had fallen inwards from the frames, and was lying on the floor. The rain streamed in through the great apertures, trickling down the furniture and making little pools upon the carpet. The settee and Joan’s easy chair were drenched and sodden. Before the window the chintz curtains blew about, sopping and forlorn.

His lips narrowed to a line. “Christ,” he said very quietly.