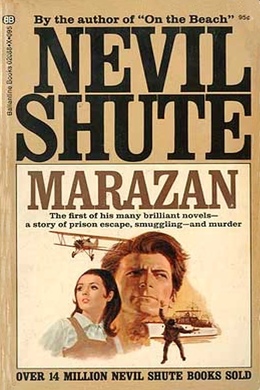 A story of flying, drug smuggling and murder in the 1920s. Pilot Philip Stenning crashes his aircraft while flying from London to Devon. He is rescued by escaped prisoner Denis Compton, who claims he was sent to prison for embezzlement after being framed by his half-brother, Italian baron Rodrigo Mattani. Owing Compton his life, Stenning agrees to investigate Mattani’s illegal activities.

It began in June. I was one of the pilots of the Rawdon Air Taxi Service then; as everyone knows, a civilian pilot, like a dramatic critic, is merely a young man who is too lazy to work for a living. I claim no exception. I had nobody to think for but myself; in those circumstances I didn’t see that it mattered much how I earned my living so long as there was plenty of it, and the work not too hard. Moreover, I was a pretty good pilot in those days. I was thirty-two years old that June, and making an income of just under a thousand a year for an average two-hour day. I used to play Rugger for the Harlequins and was making some progress with my golf, though I was never so near to the Amateur Championship as I thought I was. For the rest, I had a small bachelor flat off Maida Vale, and led about as dissolute a life as was consistent with keeping reasonably fit.

I came down from Manchester that afternoon at the conclusion of a photographic tour. It was a Wednesday, I remember, and a very hot day. I flew all the way in my shirtsleeves with my arms bare to the elbow, and without a helmet. Even so I was hot. The air was very bumpy so that we had a rough trip; from time to time I would look back at the photographer in the rear cockpit, white to the gills and retching and heaving every time we hit a bad one. I wasn’t sorry to see him like that again; for a fortnight I had been cooped up with the wretched little man in indifferent hotels. If the devil had flown away with him I could have borne up under the blow, I think. Rather he than I.

We got to London at about three in the afternoon. There was thunder about down there; great masses of cumulus were rolling up from every point of the compass, heavy-looking and pink at the edges. It grew more bumpy than ever. I wasn’t at all sorry to be home; it had grown suddenly cold, for one thing, and I wanted my coat. I had a thirst on me that I wouldn’t have sold for a fiver. I looked forward along the long bow of the machine to the familiar hangars and the aerodrome as I put her on the glide down to land; Collard had got his car out on the grass of the aerodrome in front of the Pilots’ Office and was tinkering with the engine. To announce my arrival I opened out my engine again and dived on the car; he looked up and waved an oilcan at me. I passed within a few yards of him, zoomed up again and finished with an Immelmann turn at the top for the sake of that wretched photographer. Then I throttled again, came round in a wide sweep, side-slipped her in over the hedge, and put down gently on the grass by the hangars.

I got out of the machine, cross and tired. I was as deaf as a post through flying without a helmet, and I felt as though my eyes were full of oil. I was shivering. The ground felt as heavy as lead. I’d had a pretty thick night the night before. Annesley had turned up in Manchester and had produced a couple of Flossies; before the night was out we’d done Manchester pretty thoroughly—dealt faithfully with the town. If there was a low dive in the place that we hadn’t been in, Annesley didn’t know it.

I handed the machine over to the mechanics, swore at the photographer, collected the log-books, got all my stuff out of the rear cockpit, carried the lot across to the Pilots’ Office and dumped it all on the floor.

“Had a good trip?” asked Collard.

I told him in a low monotone, while I sorted out my stuff upon the floor and put on a cardigan, what I really thought about my trip, Manchester, the machine, and the photographer. He heard me to the end, and then—

“Been missing his Kruschens again,” he observed. “What you want is a holiday.”

I stood up and let fly. “If you think I’m going to take a ruddy holiday,” I said, “just because Mr ruddy Collard thinks I want my Kruschens, you’re barking up a rocking-horse like the puppy.” Then I saw he’d got a Bass there, and I remembered I was thirsty. “Give that here,” I said. “I’ll show you what to do with that.” There was a short struggle before I put him on the ground and got it away from him; there was no corkscrew and I cut my lip against the broken neck of the bottle.

While I was trying to stop the bleeding and thinking what a rotten world it was, the office girl came down to the hut.

“Mr Morris wants to see you in his office, Captain Stenning,” she said.

I mopped at my lip and turned to Collard. “If he wants me to do another job of work today,” I said, “he can go and—” but the child was there. Then I followed her out of the hut and up through the works to the main office.

I never really got to know Morris, though I quarrelled with him every week. He was Chief Pilot and Technical Editor and Lord High Everything Else in the Rawdon firm. He was one of those lean, saturnine fellows that go about with an air of “I keep myself to myself, damn you.” He was a pretty good sort in his own way. A married man; he lived in a house overlooking the aerodrome. I believe he married money.