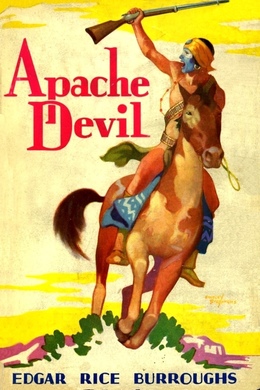 Shoz-Dijiji, or Black Bear, kidnapped by the Apaches from his white pioneer family as an infant and raised by Geronimo, is now a brave and accomplished Apache War Chief. In addition to the skills of hunting and warfare he has learned to hate violently the pin-dah-lickoyee (‘white eyes’) from witnessing their consistently wretched treatments of the Apaches: violation of treaties, forced imprisonment on reservations, and economic exploitation. Shoz-Dijiji is also embittered by bereavement over the death of a young Indian maiden he had loved. He becomes notorious as the blood thirsty Apache Devil a daring and intrepid raider, His adventures bring him together with Wichita Billings, a tough-minded white frontier girl, and they reluctantly fall in love, despite seeming culture and racial differences. But the main action of the novel is the final pursuit and surrender of Geronimos to General Miles chronicled here in grim and realistic detail. Apache Devil is remarkable for it’s honest and sympathetic treatment of Apache life at a time when almost everyone else portrayed the Apaches as devil incarnate; it is an epic worthy of Apache Devil an exciting but tragic era of American history.

The silver light of Klego-na-ay, the full moon, shone down from out the star-lit heavens of an Arizona night upon the camp of the Be-don-ko-he Apaches; shone upon sleek copper shoulders; shone upon high cheek bones; softened the cruel lines of swart, savage faces–faces as inscrutable as is the face of Klego-na-ay herself.

Shone the silver moonlight upon Nan-ta-do-tash, the izze- nantan of his people, as he led them in the dance, as he prayed for rain to save their parched crops. As he danced, Nan-ta-do-tash twirled his. tzi-ditinidi about his head, twirled it rapidly from front to rear, producing the sound of a gust of rain-laden wind; and the warriors and the women, dancing with Nan-ta-do-tash, listened to the tzi- ditinidi, saw the medicine man cast hoddentin to the four winds, and knew that these things would compel the wind and the rain to come to the aid of their crops.

A little to one side, watching the dancers, sat Shoz- Dijiji, the Black Bear, with Gian-nah-tah, friend of boyhood days, companion of the war trail and the raid. Little more than a youth was Shoz-Dijiji, yet already a war chief of the Be-don-ko-he, proven in many battles with the soldiers of the pindah-lickoyee; terror of many a scattered hacienda of Sonora and Chihuahua–the dread Apache Devil. The old men beat upon the es-a-da-ded, the primitive drum of buckskin stretched across a hoop; and to their cadence Nan-ta-do-tash led the dancers, his naked body painted a greenish brown with a yellow snake upon each arm; upon his breast, in yellow, a bear; and upon his back the zig-zag lines of lightning.

His sacred izze-kloth, passing across his right shoulder, fell over his left hip. Of a potency almost equal to this four strand medicine cord of twisted antelope skin was the buckskin medicine hat of Nan-ta-do-tash by meanS of which he was able to peer into the future, to foresee the approach of an enemy, cure the sick, or tell who had stolen ponies from other people.

The downy feathers and black-tipped plumes of the eagle added to the eflicacy and decoration of this potent head- dress, the value of which was further enhanced by pieces of abalone shell, by duklij, and a snake’s rattle which surmounted the apex, while in brownish yellow and dirty blue there were depicted upon the body of the hat clouds, a rainbow, hail, the morning star, the God of Wind, with his lungs, the black Kan, and the great suns.

“You do not dance with the warriors and the women, Shoz- Dijiji,” said Gian-nah-tah. “Why is it?”

“Why should I?” demanded the Black Bear. “Usen has forsaken the Shis-Inday. No longer does He hear the prayers of His people. He has gone over to the side of the pindah- lickoyee, who have more warriors and better weapons.

“Many times went Shoz-Dijiji to the high places and made big medicine and prayed to Usen; but He let Juh steal my little Ish-kay-nay, and He let the bullet of the pindah- lickoyee slay her. Why should I dance to the Kans if they are blind and deaf?”

“But did not Usen help you to find Juh and slay him?” urged Gian-nah-tah.

“But Usen healed the wound of your sorrow,” persisted Gian- nah-tah. “He placed in your heart a new love to take the place of the old that was become but a sad memory.”

“If Usen did that it was but to add to the sorrows of Shoz- Dijiji,” said the Black Bear. “I have not told you, Gian- nah-tah.”

“You have not spoken of the white girl since you took her from our camp to her home after you had saved her from Tats-ah-das-ay-go and the other Chi-e-a-hen,!” replied Gian-nah-tah; “but while she was with us I saw the look in your eyes, Shoz-Dijiji, and it told me what your lips did not tell me.”

“Then my eyes must have known what my heart did not know,” said Shoz-Dijiji. “It would have been better had my heart not learned, but it did.

“Long time have we been friends, Gian-nah-tah. Our tsochs, swinging from the branches of the trees, swayed to the same breezes, or, bound to the backs of our mothers, we followed the same trails across deserts and mountains; together we learned to use the bow and the arrow and the lance; and together we went upon the war trail the first time. To me you are as a brother. You will not laugh at me, Gian-nah- tah; and so I shall tell you what happened that time that I took the white-eyed girl, Wichita, back to the hogan of her father that you may know why I am unhappy and why I know that Usen no longer cares what becomes of me.”

“Gian-nah-tah does not laugh at the sorrow of his best friend,” said the other.