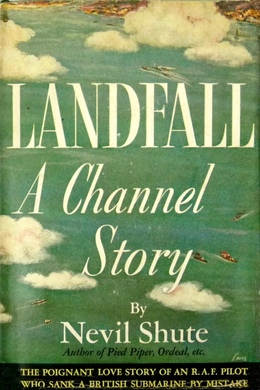 A romantic World War II adventure about the strength of true love and how it can overcome any obstacle. A British air reconnaissance officer falls for a pub waitress, but finds his lift in chaos when he accidentally bombs a British submarine, mistaking it for a German U-boat. What begins as a romantic fling develops into true love as Mona fights to present the evidence she has discovered about this tragedy in the hope that it will absolve her lover. Jerry Chambers, a fresh-faced young pilot, mistakenly sinks a British submarine. He is reprimanded and sent to a remote posting to test an experimental new bomb, a dangerous mission far away from the girl he loves. While Jerry risks his life, his sweetheart Mona sets about clearing her lover’s name…but will she be too late?

The car, a chilly little open roadster, drew away from the dim bulk of the dance hall. It accelerated with a crescendo of noise quite disproportionate to its performance and made off down the sea front, its one masked headlamp showing a feeble glimmer in the utter darkness. Presently it took a turning through the park towards the town. The steady rumble of the engine became intermittent; then there was a crashing report and a sheet of yellow flame from the exhaust pipe. It drew up to a standstill underneath the trees.

In the cramped seat the driver was conscious of the girl’s shoulder pressed against his own; only his heavy coat prevented him from feeling the warmth of her thigh. He turned to her. “I don’t know what’s the matter with it,” he said. “It won’t go any more.”

He said, “I’ll try if you like. But I don’t think it’ll go. It does this sometimes.”

He pushed the starter. The lights, already dim, went down to a dull red glow and the worn engine turned feebly. “It won’t go,” he said, and there was a hint of laughter in his voice. “It’s the rain or something.”

She stirred beside him. “I can get a bus from the corner.”

“The horse that’s coming to tow us home. It won’t be long now. You can give it a lump of sugar, but you must hold your hand flat. Otherwise you lose a finger.”

There was a light rain falling. In the darkness beneath the flapping fabric of the hood she stared at him. “Whatever are you talking about?”

“The horse. You can stroke its nose, if you like. I’ll hold it for you.”

“Where are you going to get a horse from?”

He said, “It’ll turn up. We’ve only got to sit here for a little while, and it’ll come.”

“I’ll sit here till the next bus comes.”

“All right. What’s your name?”

She hesitated. “You want to know everything, don’t you?”

“Well, it’s not much to ask. You’re going to spend the night with me, and you won’t tell me your name.”

She was startled and upset. “I don’t know what you mean,” she said. She fumbled for the handle of the door.

There was laughter in his voice. “Well, you said you’d stay here till the next bus came. It’s after half-past twelve—there won’t be any more till morning. So you’ll have to sit here all night. I do think you might tell me your name.”

She relaxed. “You do say the most awful things!”

“What have I done now? You’ve done nothing but pull me up all evening.”

“You know what you said.”

“I know. I asked you to tell me your name, and you won’t tell me. I believe you’re an enemy alien and you think I’ll put the police on you.”

“I’ll put the police on you if you don’t take me home.”

“I promise you I’ll take you home the minute the horse comes. In the meantime, I do think you might tell me who you are.”

He turned to her, immensely conscious of her presence. “Do you?”

She nodded. “You come from Emsworth aerodrome. They call you Jerry, don’t they?”

“Oh—yes. Everybody calls me Jerry. How did you know that?”

“No—just a name. The real one is Roderick Chambers. But you may call me Jerry. Tell me, what is your name? I’ve told you mine.”

She was pleased. “It is, isn’t it? I mean, there aren’t so many Monas about. Better than being called Emily, or something of that.”

He turned to her. “Tell me, where do you work?”

She laughed at him. “Think hard.”

“I am thinking. You aren’t the old charwoman who cleans out my bedroom, by any chance?”

She turned the subject. “I know what you had for supper tonight,” she said.

“Steak and chips, and then you had a bit of Stilton cheese. And you had about three half cans of bitter.”

He said, astonished, “You’re a clairvoyant.” She shook her head. “Then you smelt my breath.”

She turned her head away. “Don’t be so rude.”

She mocked him. “Aren’t you ever so quick?”

He said weakly, “I knew that all the time, of course. I was just pulling your leg.”

“You do tell stories.”

“No—honestly. You don’t think I’m the sort of chap who goes to the Pavilion to pick up girls, do you?”