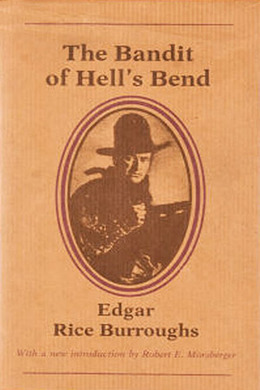 The Bandit of Hell's Bend

No better yarn of the old cattle days can be found in current fiction. Tense dramatic situations; unforgettable characters presented with incomparable skill; the humor and repartee of the “boys,” and over all the glamor and romance of the old west.

A half-dozen men sprawled comfortably in back-tilted chairs against the side of the Bar Y bunk-house at the home ranch. They were young men, lithe of limb, tanned of face and clear of eye. Their skins shone from recent ablutions and their slicked hair was still damp, for they had but just come from the evening meal, and meals at the home ranch required a toilet.

One of them was singing.

“In the shade of a tree we two sat, him an’ me, Where the Haegler Hills slope to the Raft While our ponies browsed ‘round, reins a-draggin’ the ground; Then he looks at me funny an’ laft.”

“Most anyone would,” interrupted a listener.

“Shut up,” admonished another, “I ain’t only heered this three hundred an’ sixty-five times in the las’ year. Do you think I want to miss anything?”

“‘Do you see thet there town?’ he inquires, pintin’ down To some shacks sprawlin’ ‘round in the heat. I opined thet I did an’ he shifted his quid After drowndin’ a tumble-bug neat. Then he looks at me square. ‘There’s a guy waitin’ there Thet the sheep-men have hired to git me. Are you game to come down to thet jerk-water town Jest to see what in Hell you will see?’”

One of the group rose and stretched, yawning. He was a tall, dark man. Perhaps in his expression there was something a bit sinister. He seldom smiled and, when not in liquor, rarely spoke.

He was foreman-had been foreman for over a year, and, except for a couple of sprees, during which he had playfully and harmlessly shot up the adjoining town, he had been a good foreman, for he was a thorough horseman, knew the range, understood cattle, was a hard worker and knew how to get work out of others.

It had been six months since he had been drunk, though he had taken a drink now and then if one of the boys chanced to bring a flask back from town. His abstinence might have been accounted for by the fact that Elias Henders, his boss, had threatened to break him the next time he fell from grace.

“You see, Bull,” the old man had said, “we’re the biggest outfit in this part of the country an’ it don’t look good to see the foreman of the Bar Y shootin’ up the town like some kid tenderfoot that’s been slapped in the face with a bar-rag. You gotta quit it, Bull; I ain’t a-goin’ to tell you again.”

And Bull knew the old man wouldn’t tell him again, so he had stayed good for six long months. Perhaps it was not entirely a desire to cling to the foreman’s job that kept him in the straight and narrow path. Perhaps Diana Henders’ opinion had had more weight with him than that of her father.

“I’m ashamed of you, Bull,” she had said, and she refused to ride with him for more than a week. That had been bad enough, but as if to make it worse she had ridden several times with a new hand who had drifted in from the north a short time before and been taken on by Bull to fill a vacancy.

At first Bull had not liked the new man. “He’s too damned pretty to be a puncher,” one of the older hands had remarked, and it is possible that the newcomer’s rather extreme good looks had antagonized them all a little at first, but he had proven a good man and so the others had come to accept Hal Colby in spite of his wealth of waving black hair, his perfect profile, gleaming teeth and laughing eyes.

“So I told him I’d go, fer I liked thet there bo, And I’d see thet the shootin! was fair; But says he: ‘It is just to see who starts it fust Thet I wants anyone to be there.’” “I’m going to turn in,” remarked Bull.

Hal Colby rose. “Same here,” he said, and followed the foreman into the bunk-house. A moment later he turned where he stood beside his bunk and looked at Bull who was sitting on the edge of his, removing his spurs. The handsome lips were curved in a pleasant smile. “Lookee here, Bull!” he whispered, and as the other turned toward him he reached a hand beneath the bag of clothes that constituted his pillow and drew forth a pint flask. “Wet your whistle?” he inquired.

“Don’t care if I do,” replied the foreman, crossing the room to Colby’s bunk.

Through the open window floated the drawling notes of Texas Pete’s perennial rhapsody.

“When the jedge says: ‘Who drew his gun fust, him or you?’ Then I wants a straight guy on my side, Fer thet poor puddin’ head, why, he’s already dead With a forty-five hole in his hide.”

“‘Taint so bad at that,” remarked the foreman, wiping his lips on the cuff of his shirt and handing the flask back to the other.

“Not so worse for rot-gut,” agreed Colby. “Have another!”

The foreman shook his head.