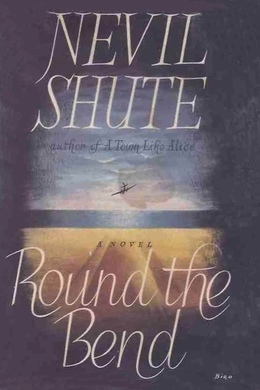 When Tom Cutter hires Constantine Shaklin as an engineer in his air freight business, he little realises the extraordinary gifts of his new recruit. Shaklin possesses a religious power which inspires everyone he meets to a new faith and hope for humanity. As Cutter’s business grows across Asia, so does Shaklin’s fame, until he is widely regarded as a unifying deity. Though he struggles to believe Shaklin is indeed divine, the friendship will transform Cutter’s life.

I came into aviation the hard way. I was never in the R.A.F., and my parents hadn’t got fifteen hundred pounds to spend on pilot training for me at a flying school. My father was, and is, a crane driver at Southampton docks, and I am one of seven children, five boys and two girls. I went to the council school like all the other kids in our street, and then when I left school dad got me a job in a garage out on the Portsmouth Road. That was in 1929.

I stayed there for about three years and got to know a bit about cars. Then, early in the summer, Sir Alan Cobham came to Southampton with his flying circus, NATIONAL AVIATION DAY, he called it. He operated in a big way, because he had about fifteen aeroplanes, Avros and Moths and a glider and an Autogiro, and a Lincock for stunting displays, and a big old Handley Page airliner for mass joy-riding, and a new thing called an Airspeed Ferry. My, that was a grand turnout to watch.

I knew from the first day that to be with that circus was the job for me. He was at Hamble for three days, and I was out at the field each day from early in the morning till dark. The chaps fuelling and cleaning down the aircraft let me help them, coiling down a hose or fetching an oil drum for them to stand on; when there was nothing else that wanted doing I went round the enclosures picking up the waste paper that the crowd had left behind and taking it away to burn in a corner of the field. It was fun just doing that, because of the aeroplanes.

I got the sack from the garage on the second day.

On the evening of their last day, I went to the foreman of the ground crew and asked him for a job. He said I was too young, and they were full up anyway. He said that he was sorry.

I went home all down in the dumps that night. I must say, Dad and Mum were good. They didn’t lay in to me for getting the sack from the garage, although they might well have done. I’d told them airily that I was going to get a job with the circus, and when I went home I suppose they saw by my face I hadn’t got it. They were ever so nice; Ma opened a small tin of salmon for tea to make a bit of a treat for me. The show was going on to Portsmouth, twenty miles away, and when I told them I was going over there next day, all Dad said was, “That’s right. Keep trying.”

I went to Portsmouth on an early bus and I was out at the airport long before the first machines flew in, helping the ground crew to put up the first enclosures round the edges of the aerodrome. The foreman scratched his head when he saw me, but they were always shorthanded so they didn’t turn me off. He must have said something to Sir Alan, though, because while I was holding a post straight for another chap to hammer into the ground, Sir Alan himself came up behind me.

“Who are you?” he asked. “I thought we’d left you behind at Hamble.”

“Well, what are you doing here, Tom?”

“Helping to get this post in, sir,” I said. I was a bit shy at being talked to by a knight.

“Got the sack day before yesterday,” I said. It sounded bad, but I didn’t know what else to say.

“Is that because you spent so much time out here with us?”

“I suppose so,” I said reluctantly.

He snorted. “Well, don’t be such a young fool. Go back and ask to be taken on again. There’s no work for you here. What was the job?”

“Well, we can’t take you on here. We’re full up. I’ve got hundreds of boys writing to me for jobs every day, hundreds and hundreds. I’ve got no jobs to give.”

“Mr. Dixon told me that there wasn’t any job,” I said. “I just thought that if I came over while I’m doing nothing, I could help, picking up the paper and that.”

He stared at me so long in silence that I felt quite awkward. I know now what a good answer that was. “I’m blowed if I know,” he said at last, and turned away. I couldn’t make head or tail of that.